Barbados were bowled out for just 64 runs with Alana King picking up four wickets for just 8 runs. With the bat, skipper Meg Lanning scored an unbeaten 36 to steer her side home without any hiccups 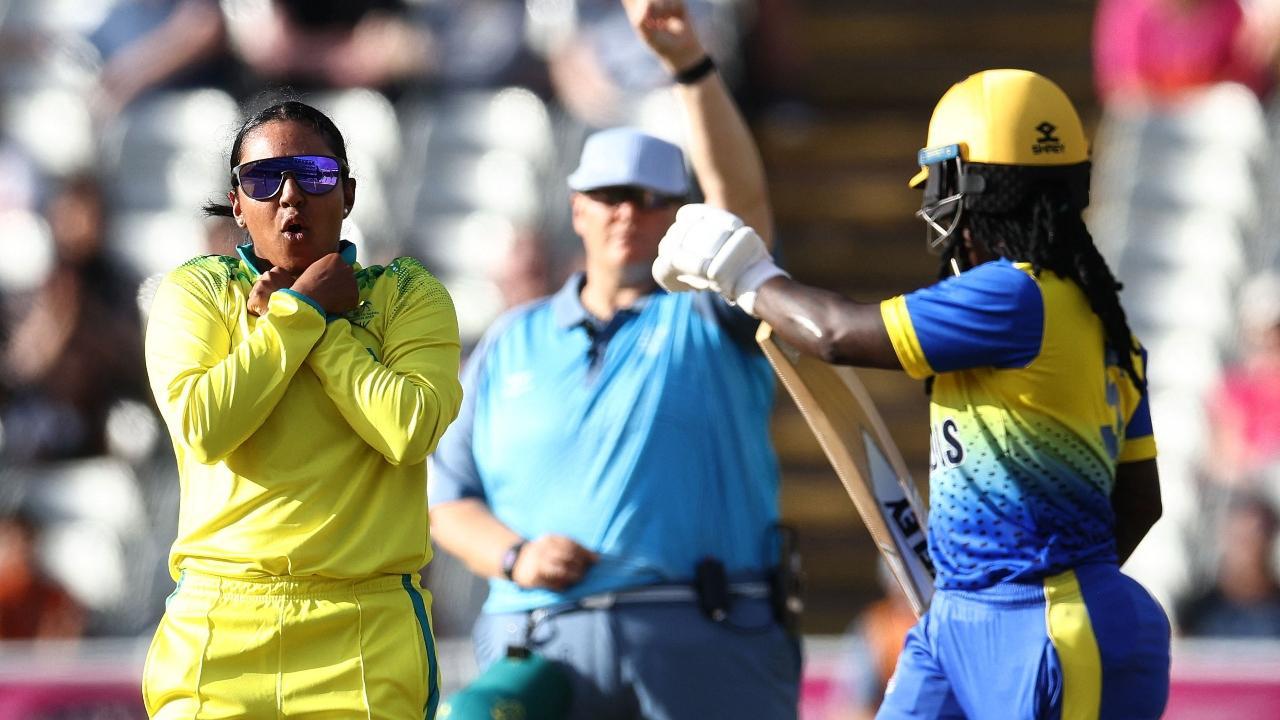 Alana King celebrates taking the wicket of Deandra Dottin during the women's Twenty20 Cricket match between Australia and Barbados on day three of the Commonwealth Games. Pic/ AFP


Led by leg-spinner Alana King's fabulous spell of 4/8, Australia brushed aside Barbados by nine wickets in their second Group A match of Commonwealth Games 2022 at Edgbaston. After Barbados were bowled out for just 64 in 20 overs, Australia chased down the target in 8.1 overs with captain Meg Lanning hitting an unbeaten 36.

Electing to bowl first, Australia never allowed Barbados to ever get going in their batting innings. Openers Hayley Matthews made a 13-ball 18 while Deandra Dottin made just eight runs in 22 balls as Australia didn't give her room to hit her shots. But the duo were dismissed within power-play as Barbados reached 37/2.

From there onwards, the spin trio of Alana, Jess Jonassen (0/7) and Ashleigh Gardner (2/6) combined to conceded only 21 runs in 11 overs. Tahlia McGrath provided good support from her pace bowling, taking three wicket for 13 runs while Darcie Brown had a scalp to her name as Barbados were skittled out for 64, with Hayley the only batter to reach double figures.

Alana had Shakera Selman and Shamilia Connell dismissed off consecutive deliveries. She could have completed her hat-trick in Commonwealth Games if Meg Lanning had held on to an easy catch at slip off Keila Elliott. It denied Alana what would have been the second hat-trick in cricket at Commonwealth Games after Brad Young achieved the feat for Australia in men's List A event in 1998.

Also Read: Harmanpreet Kaur: Will look to build on the positives from Pakistan victory at CWG 2022

"I'll have nightmares. I wanted to dig a hole and jump in it as quick as I could. I don't know, I tried my best and I dropped it. I wasn't overly pleased. Let's put it that way. I was just disappointed for Kingy, she was bowling so well and to let her down like that was not ideal. But that's cricket, I guess," said Meg after the match.

In pursuit of 65, Beth Mooney fell in the second over for 2, stumped off Shanika Bruce. But Meg and Alyssa Healy (23 not out) took Australia home in just 49 balls. Meg hit five fours and two sixes in her unbeaten knock of 36, which included taking 25 runs against Deandra in the sixth over. Alyssa, on the other hand, played a more cautious hand with an unbeaten 24-ball 23, including four fours.

The nine-wicket victory sees Australia book their place in the semifinals of the event, while Barbados' chances of qualifying for the knockouts depends on how they fare against India on Wednesday.