Going by the ICC manual, India all-rounder Deepti Sharma's run out of Charlie Dean in the third ODI was perfectly legal, but it still divided opinions with the likes of Stuart Broad and James Anderson, expressing their annoyance. 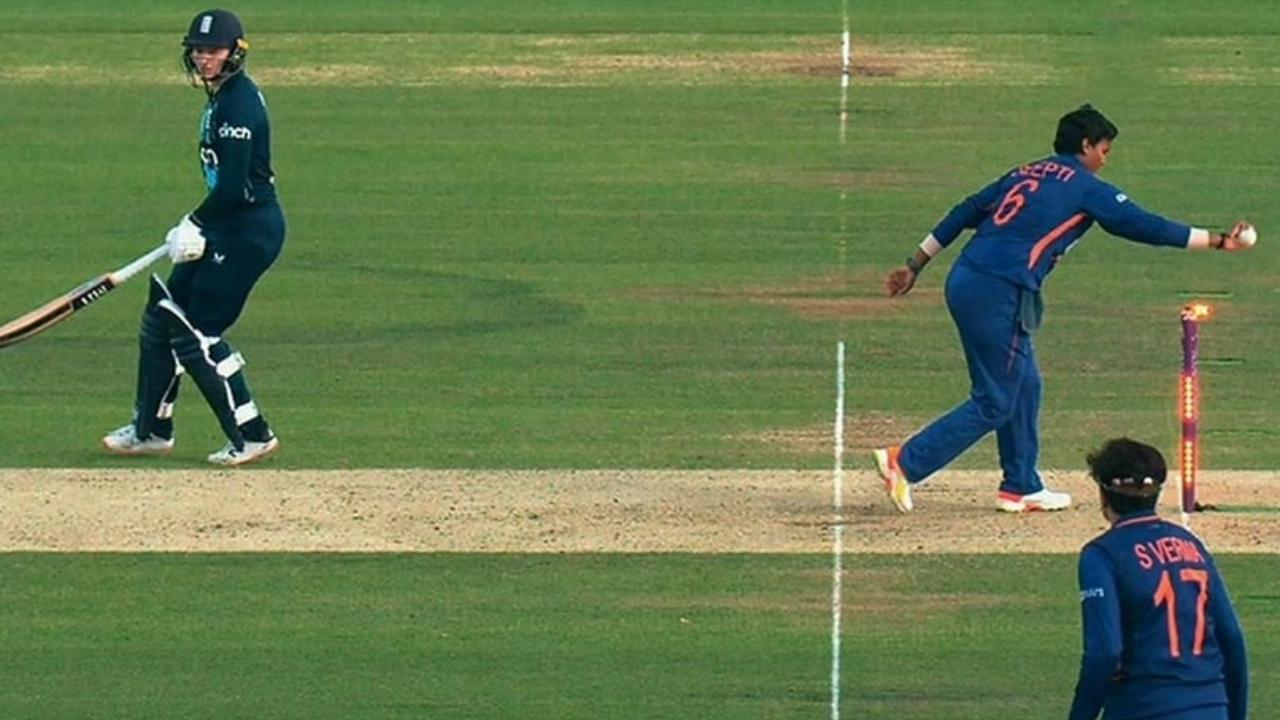 
Going by the ICC manual, India all-rounder Deepti Sharma's run out of Charlie Dean in the third ODI was perfectly legal, but it still divided opinions with some backing it and Englishmen, such as Stuart Broad and James Anderson, expressing their annoyance. The Indian women's team beat England at Lord's to sweep the three-match series and give a fitting farewell to the legendary Jhulan Goswami on Saturday. However, bowler Deepti running out Charlie Dean to claim England's last wicket, after the batter had backd up, caused a controversy. Dean was backing up when Sharma stopped in the middle of her bowling action to run out the batter for 47 runs with the target just 17 runs away. The dismissal is perfectly legal according to laws of the game.

"I find the debate of the Mankad really interesting. So many views from either side. I personally wouldn't like to win a match like that, also, very happy for others to feel differently," Broad tweeted. Broad's longtime teammate and leading wicket-taker among pacers, Anderson said, "Will never understand why players feel the need to do this. Is she stealing ground?" Another English player, Sam Billings, wrote on his Twitter handle, "There's surely not a person who has played the game that thinks this is acceptable? Just not cricket!" However, many also came in support of the dismissal with former India opener Virender Sehwag calling some English players "poor losers". "Funny to see so many English guys being poor losers," Sehwag tweeted.

In another tweet, he congratulated the Indian team for its fitting farewell to veteran seamer Jhulan. "Fantastic win for the Indian Girls. A fitting tribute to Jhulan Goswami with a series win. Well done @BCCIWomen." Leading India off-spinner Ravichandran Ashwin, who has often objected to these kind of run outs been termed 'Mankading' (named after former India player Vinoo Mankad), also backed the Indian team. "Why the hell are you trending Ashwin? Tonight is about another bowling hero @Deepti_Sharma06," he tweeted.

"Congratulations to one of India's finest cricketers, @JhulanG10 well done on a wonderful career and of course needless to say that you inspired so many girls to take up the sport. Good luck to you as you move towards a new chapter in life," Ashwin wrote in another tweet. Sent into bat, India were all out for a paltry 169, and at that point it looked like the tourists may have fallen many runs short of making the match a memorable one for their legendary seamer, who is calling it quits after two decades of incredible service to the game.

However, the Indians managed to eke out a win as Dean (47) was adjudged run out for backing up. Dean, who nearly pulled off a stunning win for the hosts after they were reeling at 65 for seven and then 103 for eight, was out of her ground and Deepti simply held the ball to remove the bails, leaving the English flabbergasted. While it has always been a legal mode of dismissal, recently the ICC, while modifying the playing conditions, had moved these kind of dismissals from 'unfair play' to 'run out'.

Next Story : Whatever we have done I don't think it was any crime: Harmanpreet Kaur on the run out