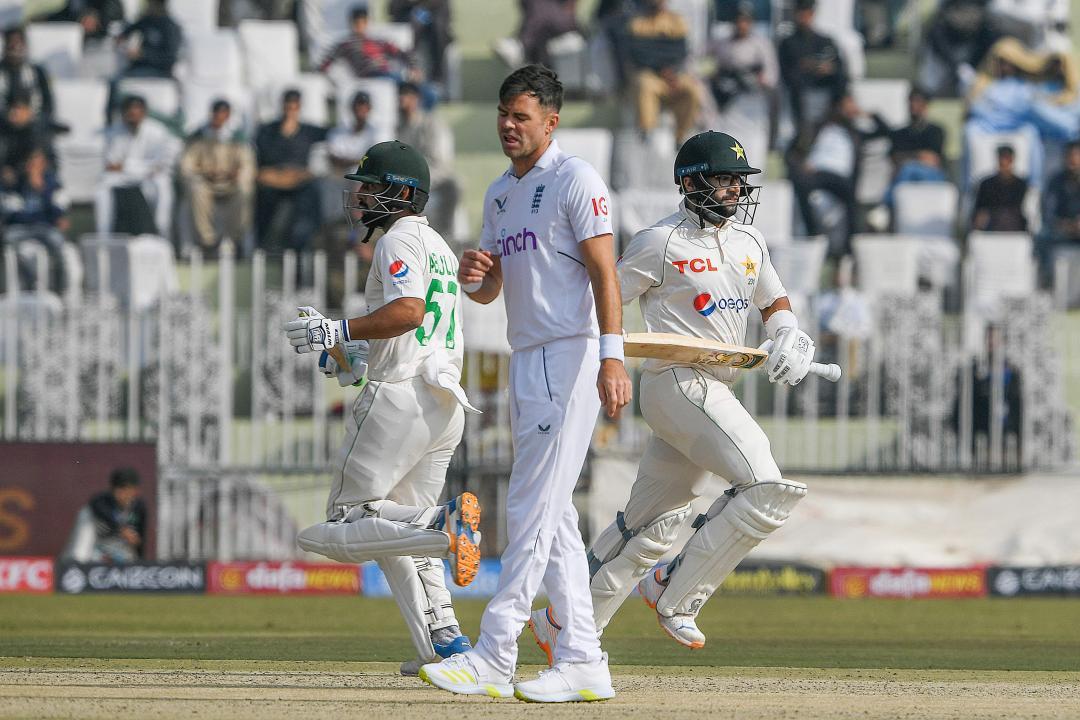 Pakistan's Abdullah Shafique (L) and teammate Imam-ul-Haq (R) run between the wicket as England's James Anderson (C) looks on during the second day of the first cricket Test match between Pakistan and England at the Rawalpindi Cricket Stadium.Pic/AFP


England was bowled out for 657 on the second day of its record-setting first test in Pakistan in 17 years on Friday.

After amassing a world record 506-4 in 75 overs on the opening day when four of the five top-order England batters scored centuries, England added 151 runs at the same electrifying pace to rack up its highest total in a test innings against Pakistan.

England's previous best effort in a test innings against Pakistan came at Manchester in 2016 when it scored 589-8.

Pakistan openers Imam-ul-Haq (11 not out) and Abdullah Shafique (6 not out) watchfully played out the six overs from James Anderson and Ollie Robinson before reaching 17-0 at lunch.

Leg-spinner Zahid Mahmood recorded most expensive figures in a debut test innings when he finished with 4-235. Sri Lankan offspinner Suraj Randiv held the previous record when he ended up with 2-222 against India at Colombo in 2010.

To compound Pakistan bowling problems, fast bowler Haris Rauf (1-78) couldn't take the field on Day 2 after feeling discomfort in his right quad. Rauf, playing his debut test in his hometown, rolled over the ball during fielding on the first day and his injury was being monitored by the team medical staff.

Captain Ben Stokes, resuming on 34, lofted Naseem Shah (3-140) over his head for a straight six off the first ball he faced on Day 2 before he was clean-bowled by the fast bowler off a slower delivery in the same over after scoring 41 off 18 balls.

Brook, resuming on 101, didn't give Pakistan bowlers any respite on a flat wicket with his superb stroke play as he smashed Mahmood for 27 runs in an over that included a reverse swept six. Brook finally holed out at deep square leg for 153 off 116 balls which featured 19 fours and five sixes.