Chasing 210 for victory, Pakistan could manage just 142/8 in 20 overs with Chris Woakes wreaking havoc at the top of the order by dismissing skipper Babar Azam (4) and then getting rid of the dangerous Shan Masood (56) 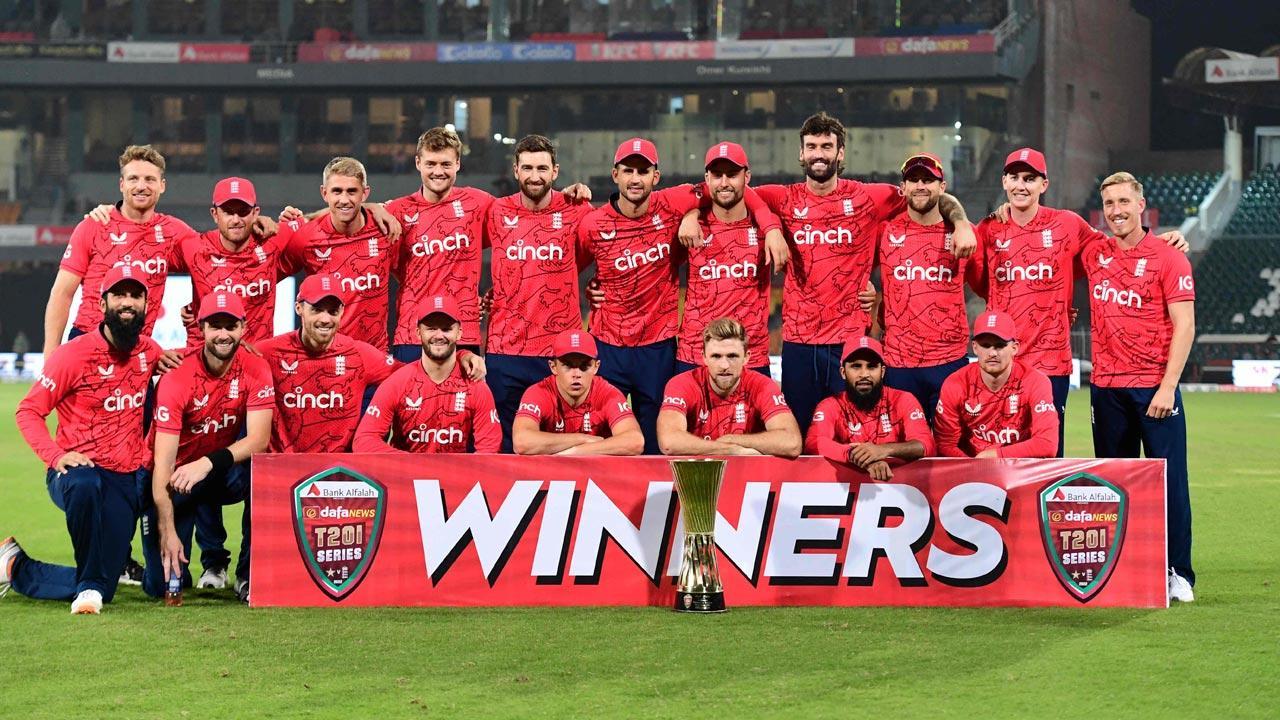 England's players pose with the trophy after winning the series at the end of the seventh Twenty20 international cricket match between Pakistan and England at the Gaddafi Cricket Stadium in Lahore. Pic/AFP


An unbeaten 78 by Dawid Malan and useful contributions from Ben Duckett (30) and Harry Brook (46 not out) propelled England to a 67-run series-winning victory against Pakistan in the seventh and final T20I at the Gaddafi Stadium here on Sunday night.

The 4-3 series win will be a big boost for the reigning ODI world champions as they aim for the ICC T20 World Cup trophy later this month in Australia.

Chasing 210 for victory, Pakistan could manage just 142/8 in 20 overs with Chris Woakes wreaking havoc at the top of the order by dismissing skipper Babar Azam (4) and then getting rid of the dangerous Shan Masood (56).

For Pakistan, it was a disappointing finale as they surrendered after having contested the series so resolutely. They missed tall pace bowler Shaheen Shah Afridi through injury and the ongoing concerns surrounding the fitness of teenage right-arm quick Naseem Shah, who will be pivotal to their hopes of winning the T20 World Cup.

While pacer Haris Rauf, with eight wickets in the series, and veteran opener Mohammad Rizwan (316) and skipper Babar Azam (285) have done remarkably well in the series, the opening duo did not fire in the series decider, being dismissed for 1 and 4 runs respectively.

Babar also dropped two chances in the field and Pakistan won't be able to afford any sloppy mistakes if they are to claim a second T20 World Cup title in Australia.

England, despite being without regular skipper Jos Buttler who is nursing a calf injury, and charismatic batters Jonny Bairstow and Liam Livingstone, gave a commanding performance under stand-in captain Moeen Ali as the top order gave the tourists a flourishing start.

Dawid Malan (78 not out) found form in the final game of the series and is likely to be a key player at the T20 World Cup, while David Willey, Chris Woakes and Reece Topley have shown they are capable T20I performers.

With Buttler and Livingstone in line to return for the T20 World Cup, England should be considered one of the favourites to win the four-week event, according to ICC.

Pakistan, meanwhile, will travel to New Zealand for a tri-series against the Black Caps and Bangladesh, before warm-up matches in Brisbane against England and Afghanistan.

Next Story : IND v SA, 2nd T20I: Death overs an area where we will be challenged with bat & ball, says Rohit Sharma