Willey took four early wickets as Ireland slumped to 28-5 after losing the toss.- Campher fifty - But Curtis Campher held firm with an unbeaten 59 on debut. 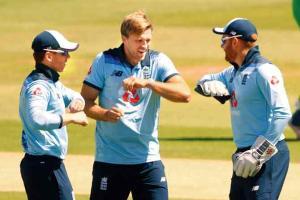 
David Willey marked his return to England duty with a maiden five-wicket one-day international haul after sparking an Ireland collapse as white-ball cricket resumed Thursday following the coronavirus lockdown. The left-arm paceman was appearing in his first ODI since being left out of England's World Cup-winning squad for Jofra Archer. Willey responded by taking 5-30 from 8.4 overs as Ireland were dismissed for just 172 in the first of a three-match series that launches the new World Cup Super League to determine qualification for the 2023 50-over showpiece in India.

Willey took four early wickets as Ireland slumped to 28-5 after losing the toss.- Campher fifty - But Curtis Campher held firm with an unbeaten 59 on debut. Together with Andy McBrine (40) he shared a stand of 66 after Ireland were in danger of being dismissed for under 100 at 79-7. Willey struck with just the fourth ball of the match when Paul Stirling chipped him to England captain Eoin Morgan at midwicket. And Ireland were 7-2 when skipper Andy Balbirnie was caught behind driving at Willey. Gareth Delany hit five fours in his 22 before he struck Willey straight to backward point.

Next ball, the 30-year-old Willey, the son of former England batsman and umpire David Willey, had Lorcan Tucker lbw for a duck on review to leave Ireland 28-5. Kevin O'Brien, whose stunning century set up a remarkable Ireland win over England during the 2011 World Cup in Bangalore, made 22 before he holed out off leg-spinner Adil Rashid. The 21-year-old Campher toured England with South Africa Under-19s two years ago before deciding to take advantage of his mother's Irish passport. His fifty came off 103 balls.

McBrine, who hit off-spinner Moeen Ali for six, pulled Tom Curran to deep square leg before Willey ended the innings with more than five overs remaining, dismissing last man Craig Young. Willey's return was his best in 47 ODIs, surpassing his 4-34 against Sri Lanka in Cardiff in 2016. As happened before each of the recent England-West Indies Tests, players from both sides took a knee before play in support of the Black Lives Matter campaign.

Next Story : Hardik-Natasa are parents: Congratulations pour in on 'Chhota Hardik'