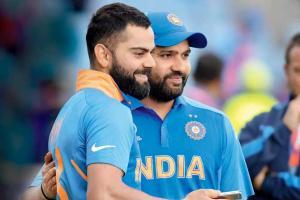 
A team India head coach candidate has revealed that he was asked about how he would handle the alleged rift between skipper Virat Kohli and Rohit Sharma during Friday's interview sessions at the BCCI headquarters in Mumbai.

The candidate who eventually didn't get the job which went to Ravi Shastri, replied: "I told the Cricket Advisory Committee (CAC) that there is no such fight and Virat has gone on record to deny this, so I don't know how to answer this question but I would have stepped in immediately and doused it. I wouldn't have allowed it to escalate. I would also involve the BCCI and keep them in the loop because I want a happy and healthy dressing room. If at all there was a rift why couldn't the present coach solve it?"

Meanwhile, it is learnt that the Indian coaches are upset that they were rated below New Zealander Mike Hesson (2) and Australian Tom Moody (3). "I was even complimented for my coaching knowledge by one member of the CAC. He asked me how did I learn so much about coaching. I was also asked whether I would do the job for only the limited overs team or only the Test side and I replied in the affirmative," the former India player said.

If the Indian candidates are not jumping with glee, there is some soreness in the Trans-Tasman cricketing circles as well with Hesson and Moody missing out. The ex-Australian all-rounder, who has coached Sunrisers Hyderabad in the Indian Premier League, applied for an India coaching position for the third time.

"They made Moody a third-class coach, Hesson second class and Shastri top-class. No rating for Robin and Rajput — both humiliated in public," posted a well-travelled Indian journalist on Facebook.