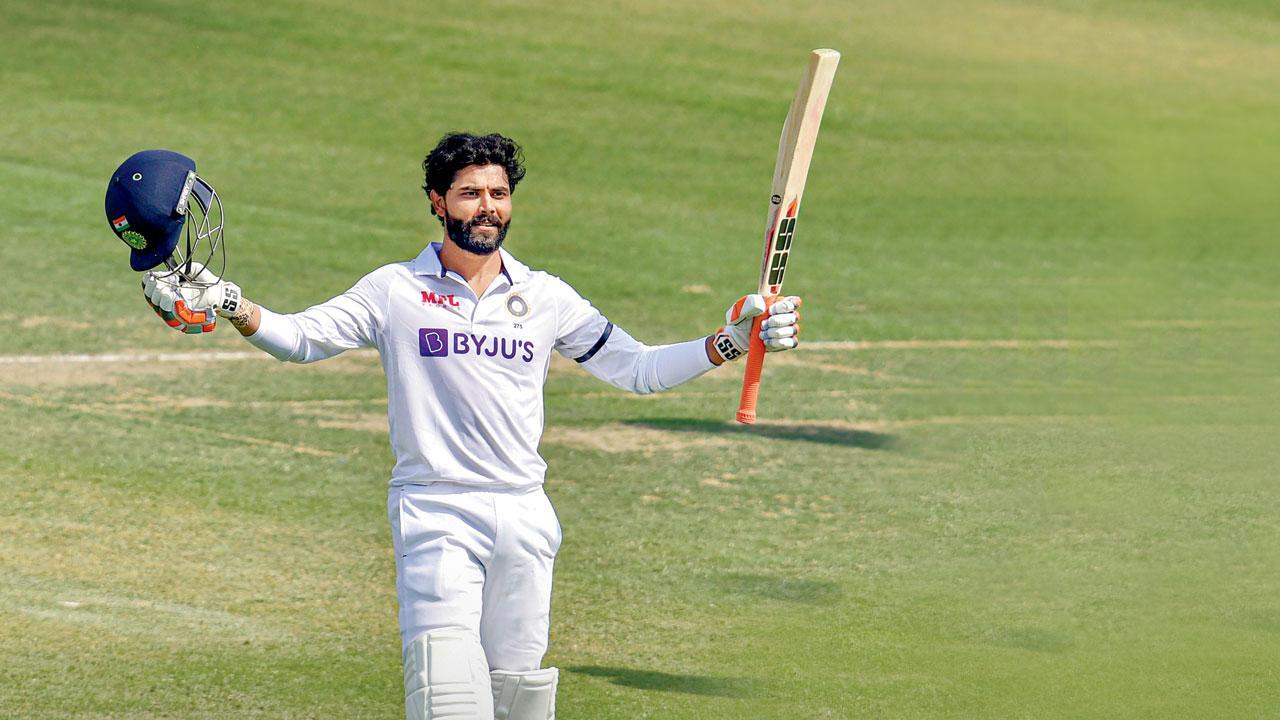 Ravindra Jadeja celebrates after scoring a century on Day Two of the first Test against Sri Lanka at the IS Bindra PCA Stadium in Mohali on Saturday. Pic/PTI


Late on the second day, India picked up four Sri Lankan wickets on a pitch where the ball is turning as well as keeping low. All the four were leg-before decisions. The way the Sri Lankan innings is crumbling gives an indication to an early finish to the first Test at the PCA Stadium here.  Had Jasprit Bumrah not no-balled the delivery with which he had castled Pathum Nissanka and another LBW not overturned on DRS review, the visitors would have been in an even deeper mire.

At 108 for four and miles away from saving the follow-on, the Sri Lankans already looked a doomed side. How much resolve and determination they can show to put up a fight, will determine how long the match will last. Will India clean up the Lankan innings without conceding many, and if at all they will enforce the follow-on, will be interesting to see on Day Three.

India are looking at a big win now and have to thank their all-rounder Ravindra Jadeja, who played like a seasoned batsman to notch up his highest Test score of 175 not out.

Had India not chosen to declare at 574 for eight, he could well have gone on to complete a double century to add to his undefeated 100 against West Indies at Rajkot in 2018, which was his first Test hundred.

Jadeja has over the years shown enough skills as a batsman and the way new skipper Rohit Sharma has backed him as a genuine all-rounder, has given Jadeja the confidence to bat fluently. The results are there for all to see. He batted with utmost authority for almost five and a half hours facing 228 deliveries and hitting 17 fours and three sixes. The quality of his knock was such that even Virat Kohli would have been proud to play an innings like this in his 100th Test.

One thought that the Sri Lankans would wrap up the Indian innings on the second morning itself, but Jadeja and Ashwin batted resolutely and as the bowlers became clueless, the two lower order batsmen collected runs at ease. The two put on 130 for the seventh wicket and when Ashwin fell for 61, one thought India might declare.

But the home team batted on and Jadeja pressed on the paddle and garnered quick runs to help India post a huge total with which they could put pressure on the rival batsmen. And that’s exactly what the Indian bowlers did and picked up wickets regularly on a pitch where the Sri Lankan bowlers had struggled to contain the lower order batsmen, leave alone getting them out.
The moment, Ashwin came in to bowl, he had the Lankan batsmen in a spin with the odd ball keeping low and some turning a long way.

On this slow and low pitch, the Indian bowlers eked out four leg-before decisions, three were umpire’s call. Though the edges are not carrying to the close-in fielders, the LBWs do not augur well for the visiting batsmen as the match progresses. And it was a big relief for the Lankans when Bumrah no-balled the delivery with which he had cleaned up Nissanka and an LBW decision against Charith Asalanak being overturned on DRS. Going into the third day, they have a bit of batting to put up a fight. As of now, it seems that match is heading in one direction—towards an Indian victory.

Both teams observed a minute’s silence and wore black bands to mourn the deaths of two Australian legends, Shane Warne and Rodney Marsh.

Next Story : Ravindra Jadeja: I asked team to declare as pitch offered turn and bounce