With the pitch still offering something to the bowlers, Delhi had their chances and did manage to put Mumbai in a spot of bother, but poor effort in the field and some good batting by Ishan Kishan (48 off 35 balls, 4x3, 6x4), Dewald Brevis (37) and Tim David (34) helped them reach the target 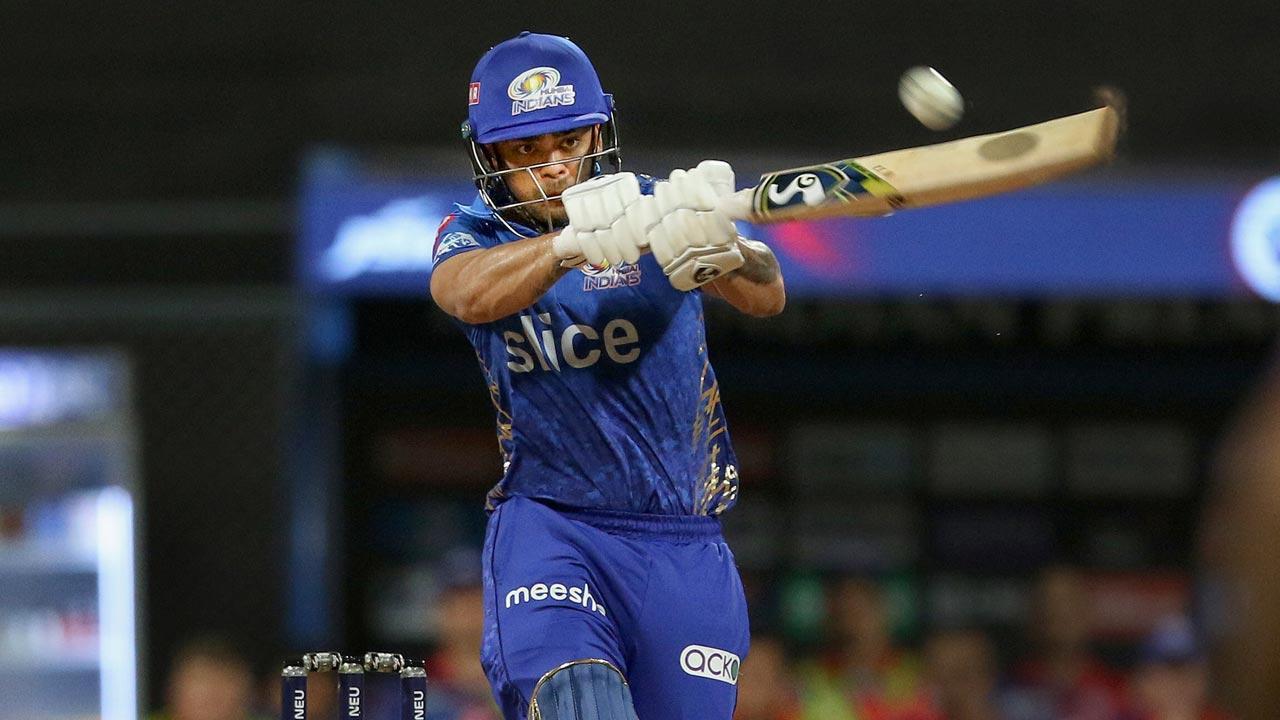 Ishan Kishan of Mumbai Indians bats during the against Delhi Capitals at the Wankhede Stadium in Mumbai. Pic/ PTI


Clinical batting by Ishan Kishan (48), Dewald Brevis (37) and a brilliant 11-ball 34 by Tim David helped Mumbai Indians beat Delhi Capitals by five wickets and deny the Rishabh Pant-led side a place in the playoffs.

In a match that they have to win to qualify for the playoffs, Delhi Capitals were asked to bat first by Mumbai Indians skipper Rohit Sharma on a pitch that offered bounce to the seamers and turn to spinners on Saturday.

They got off to a poor stand (31/3), recovered in the middle overs but slumped towards the end again as they ended with a below-par score of 159/7 in 20 overs thanks mainly to Rovman Powell (43) and Rishabh Pant (39), who rescued the team with a 75-run partnership for the fifth wicket.

Chasing 160 to win, Mumbai rode on crucial knocks by Kishan, Brevis, and David as they reached 160/5 in 19.1 overs to record their fourth win and end on eight points, the same as Chennai Super Kings but were placed last in the table on net run rate.

Delhi Capitals slumped to their seventh defeat in 14 matches, finishing with 14 points, and fifth place in the table. But they had themselves to blame as they succumbed to nerves and some good bowling by Jasprit Bumrah as they got a sub-par score.

With the pitch still offering something to the bowlers, Delhi had their chances and did manage to put Mumbai in a spot of bother, but poor effort in the field and some good batting by Ishan Kishan (48 off 35 balls, 4x3, 6x4), Dewald Brevis (37) and Tim David (34) helped them reach.

Ishan Kishan was the more aggressive of the Mumbai Indian openers as he struck two fours and a six in Anrich Nortje in the second over. But Rohit Sharma failed to click in the last match for Mumbai Indians as he got out for 2, caught by Shardul Thakur off Nortje.

Kishan and Dewald Brevis added 51 runs for the second wicket before Kishan got out, David Warner pocketing a skier off a ball going leg-side. Kishan struck 48 off 36 deliveries, hitting three fours and four sixes in the process. He hit Shardul Thakur, Kuldeep Yadav anbd Axar Patel to a six apiece before getting out two short of a half-century.

Brevis, the South African U-19 player who came into the playing XI in place of Tristian Stubbs, blasted three sixes during his 33-ball 37 and added 50 runs for the fourth wicket with Tim David but was bowled by Shardul Thakur as Delhi tried to claw their way back into the match.

Tim David blasted four sixes and two fours during his 11-ball 34 to turn things towards Mumbai Indians again but his ouster from the middle, caught by Prithvi Shaw as he tried to flick a leg-stump yorker but only managed a leading edge. However, he had already done his job, dragging Mumbai to 145/4 in 18th over, leaving them needing 15 ns off 14 deliveries.

Delhi players seem to lose their nerves as skipper Pant dropped a skier while their fielders made some silly errors in the outfield as Mumbai inched closer to the target.

Mumbai's hopes rested on Tilak Verma and he was out off the last delivery of 19th over with Mumbai 155/5. Mumbai needed five runs off the last six deliveries but a no-ball by Khaleel Ahmad and a four by Ramandeep Singh off the resultant free-hit saw Mumbai Rohit Sharma's side home,

Next Story : End on a high!