Harpreet Brar and Nathan Ellis took three wickets each to restrict Hyderabad to 157/8, Punjab chased down the total with 29 balls to spare 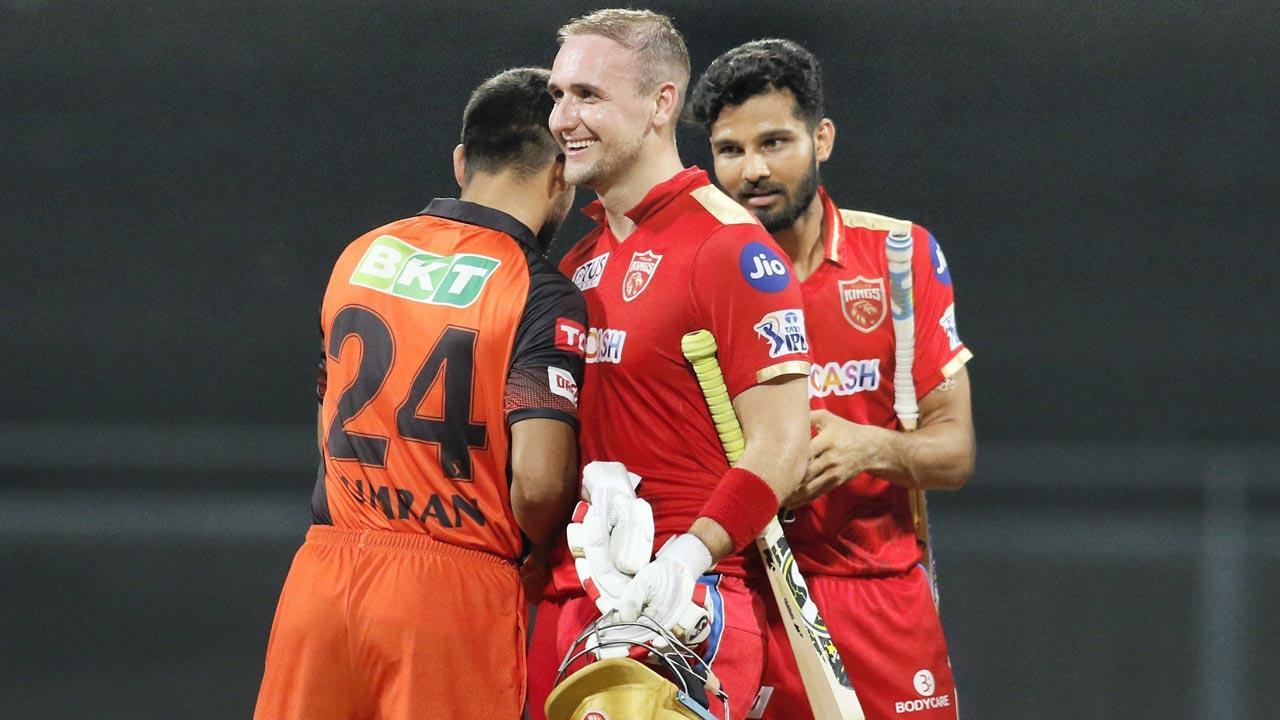 Punjab Kings celebrate their win against Sunrisers Hyderabad at the Wankhede Stadium in Mumbai. Pic/ PTI


Punjab Kings signed off from IPL 2022 on a high by registering a five-wicket win over Sunrisers Hyderabad at the Wankhede Stadium on Sunday. After left-arm spinner Harpreet Brar and pacer Nathan Ellis took three wickets each to restrict Hyderabad to 157/8, Punjab chased down the total with 29 balls to spare, thanks to a rollicking unbeaten 49 off just 22 balls from Liam Livingstone.

In the pursuit of 158, Jonny Bairstow began with five boundaries off Bhuvneshwar Kumar and Washington Sundar in the first two overs. Despite getting a reprieve from Umran Malik in the second over, Bairstow couldn't make much of the chance as left-arm pacer Fazalhaq Farooqui flattened his off-stump.

Shahrukh Khan got going by pulling Kumar for a six over deep midwicket. In the next over, he clipped Farooqi through the same region for four. Shikhar Dhawan was lucky to survive an inner edge off Farooqui and went on to thump Jagadeesha Suchith by dancing down the pitch and smacking back-to-back sixes over deep mid-wicket.

Shahrukh welcomed Umran Malik with a beautiful straight drive. But the pacer, who got a call-up to India's T20I squad before the match began, had the last laugh as Shahrukh miscued to mid-on. With Mayank Agarwal falling cheaply to Sundar after suffering a blow to his rib-cage off Malik, Punjab needed quick runs to win the match.

That was provided by Livingstone, who was off the mark with a gigantic pulled six over deep mid-wicket off Sundar. He then thumped Malik for consecutive sixes wide long-off and deep mid-wicket. Though Dhawan chopped on to his stumps, Jitesh Sharma struck three fours and a six in his first five balls before holing out to long-on off Suchith.

By then, Livingstone had been dropped again at 26 after being given a reprieve earlier at six. From there on, the hard-hitting batter clubbed Romario Shepherd for two fours and as many sixes, including bringing the 1000th six of the tournament, to take 23 runs off the 15th over. Debutant Prerak Mankad lofted Malik over cover for the winning boundary to sign off from the tournament on a high.

Earlier, Washington Sundar and Romario Shepherd produced late fireworks to take 58 runs off the last four overs to give a big boost to Hyderabad, who were in trouble at 96/5. They had a sedate start, getting nine runs in the first two overs. Punjab drew the first blood when Priyam Garg tried to flick too early against a cross-seam delivery on pads from Kagiso Rabada and the leading-edge was caught by mid-off.

Rahul Tripathi joined forces with Abhishek Sharma to stitch a 47-run stand off 35 balls, including the former being dropped by pacer Nathan Ellis off his own bowling. But Brar, in his first over, ended the partnership by having Tripathi sweep a down leg delivery straight into the hands of short fine leg.

Brar returned in his second over to take out Abhishek Sharma, who tried to loft over long-on. But the left-hander never got the elevation and Livingstone jumped in the air to take the catch with both hands just inside the advertising rope.

Punjab continued to dent Hyderabad's innings as Nicholas Pooran nicked straight off an across-going delivery to Sharma off Ellis. Brar picked up his third wicket of the night by using turn and bounce to get Aiden Markram forward and Sharma from behind whipped the bails when the right-hander's backfoot strayed out of the crease.

From 96/5 in 14.4 overs, Hyderabad were able to cross the 150-mark, thanks to the 58-run stand, off 29 balls between Sundar and Shepherd. After starting cautiously against Arshdeep, the duo took 43 runs off overs 17, 18, and 19, hitting eight boundaries between themselves, including a scoop from Sundar off Rabada, to give Hyderabad a respectable score despite the batter and J Suchith falling in the final over, proving inadequate to avoid a loss.

Next Story : I felt Tim David nicked it, but others were not convinced: Rishabh Pant