Bangalore were off to a flying start with Kohli and du Plessis hitting nine boundaries to reach 55/0 in power-play. It was also just the third time Gujarat failed to pick a wicket in the first six overs 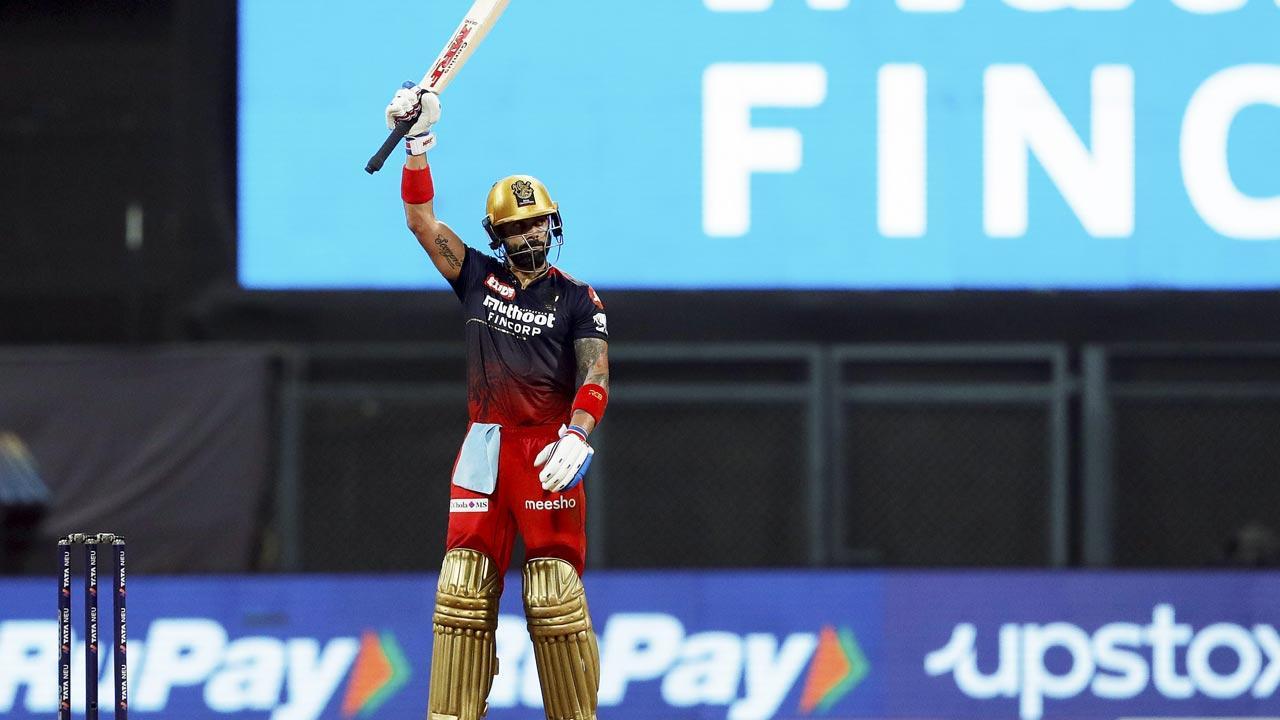 
A vintage blitz from Virat Kohli (73 off 54 balls), with support from Faf du Plessis (44 off 38 balls) and Glenn Maxwell (40 not out off 18 balls) takes Royal Challengers Bangalore to fourth place in IPL 2022 points table with an emphatic eight-wicket win over table-toppers Gujarat Titans at the Wankhede Stadium on Thursday.

After Hardik Pandya's unbeaten 62 carried Gujarat to 168/5, Kohli came out all guns blazing, bringing out his vintage self with a pumped-up attitude to notch up his highest score of the tournament while stitching a 115-run opening stand with du Plessis. After the duo fell, Maxwell applied the finishing touches as RCB emerged victorious with eight balls to spare.

With Bangalore's win, Sunrisers Hyderabad and Punjab Kings are out of the knockouts race. For Bangalore to retain their fourth place and progress to the playoffs, they would need Delhi Capitals to lose to Mumbai Indians on Saturday.

In the pursuit of 169, Bangalore were off to a flying start with Kohli and du Plessis hitting nine boundaries to reach 55/0 in power-play. It was also just the third time Gujarat failed to pick a wicket in the first six overs.

The chief reason behind it was Kohli running quick off the blocks and quashing queries over his poor form throughout the tournament, with the crowd at Wankhede Stadium firmly cheering for the talismanic batter.

He began by lofting Mohammed Shami over his head and then superbly lofted him inside-out over extra-cover. Thursday felt like luck was favouring Kohli heavily. When Hardik Pandya cramped Kohli with a slower ball, the thick inside edge rolled past the stumps.

When Kohli whipped a full ball in the air, Rashid Khan, who was inches inside the square-leg boundary, dropped the catch. Kohli then produced the shot of the match, dancing down the pitch and lofting straight over Rashid's head with impeccable timing.

With du Plessis giving solid support, Kohli brought up his fifty in 33 balls with a nice clipped six over deep mid-wicket off Rashid. Du Plessis brought up the century of the opening partnership by swatting Lockie Ferguson through mid-wicket. But he fell six short of his fifty, as top-edge on slog sweep went to cover off Rashid, bringing the 115-run stand to a close.

Rashid then hit the top of Maxwell's leg stump as the batter tried to swipe across the line. But the bails didn't come off and the ball rolled away for four byes. The slice of luck at the start proved advantageous for Maxwell as he smacked Pandya for sixes - loft over long-on and reverse scoop over third man - apart from a boundary through long leg.

Kohli's dazzling show continued as he elegantly brought out a lofted drive over long-off against Rashid. But a ball later, Kohli tried to hit another six but the ball went through the gap between bat and pad to be stumped by a quickish googly from Rashid. Maxwell smacked four boundaries in his next nine balls, including three off Ferguson, to seal the match in Bangalore's favour.