After scoring 168 runs in 20 overs Gujarat Titans thought that they had enough runs on the board but in the end, RCB chased it in 18.4 overs 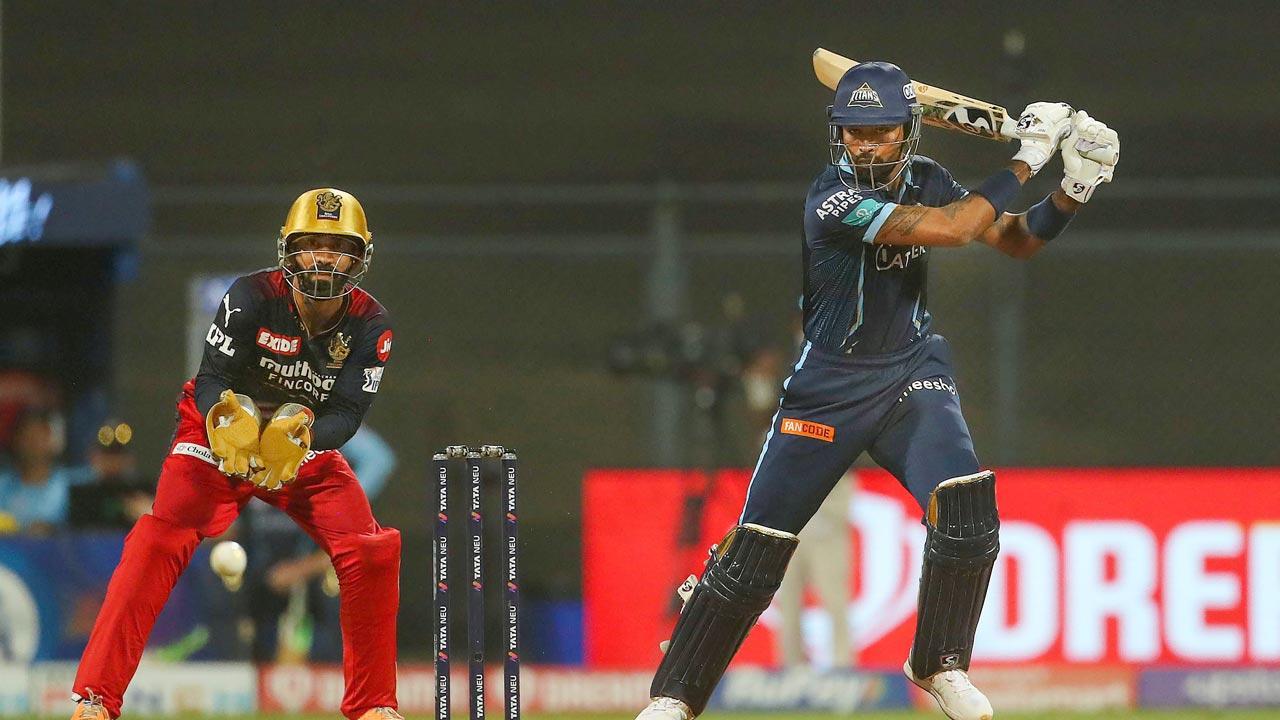 Hardik Pandya while playing a shot during the match at the Wankhede Stadium in Mumbai. Pic/ PTI


Gujarat Titans faced their fourth defeat in the season losing to Royal Challengers Bangalore by eight wickets here at the Wankhede Stadium. The Hardik Pandya led side failed to defend a 169-run target and the skipper feels that they were 10 runs short in the end.

"We kind of got it back in the game as well but Maxwell playing the way he played, and a couple of chances there, we were 10 runs short in the end," said Gujarat Titans' captain Hardik Pandya in the post-match presentation ceremony.

Hardik Pandya introduced his express quick pace bowler Lockie Ferguson in the 13th over but after bowling, one over was taken off the attack and was introduced in the 19th over and conceded 21 runs in 1.4 overs. "We wanted to give him the opportunity a bit but the wicket was holding a bit where we thought the ones who could bowl slower balls or take the pace away would be a better option," said Hardik Pandya.

After scoring 168 runs in 20 overs Gujarat Titans thought that they had enough runs on the board but in the end, RCB chased it in 18.4 overs.

"It was just about a par score. Batting we did get 55 or 60 in the last five when the ball was stopping a bit but 168 we were quite happy," said Hardik Pandya.

The GT team looked on course for setting a big target but losing David Miller and Rahul Tewatia in back-to-back overs did impact their performance and they could score 168/5 in 20 overs.

For skipper Hardik Pandya it was a good match even though his team lost as the all-rounder scored an unbeaten 62 off 47 balls.

"It's always good to score runs but more than anything, the way the boys are gelling and the way things are going, for us this game was a learning," said Hardik Pandya.

In what came as a surprise for everyone is the fact that Wriddhiman Saha played this match but did not keep as Gujarat Team management made Matthew Wade to keep in the match.

"He was feeling his hamstring was tight. So just precautionary wise, we felt it was right to have Wadey keep," said Hardik Pandya.

Gujarat Titans lost only their fourth match of the season in 14 matches winning 10 and now they will next play in the Qualifier-1 on Tuesday.