U- 19 cricket hero Ankolekar urges mum Vaidehi to stop working as a BEST conductor after India's Asia Cup success, but she is keen to continue 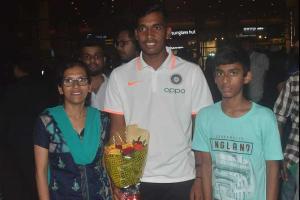 
India under- 19 Asia Cup- winning team's star Atharva Ankolekar was overwhelmed to see his mother Vaidehi, younger brother Parth and around 30 of his friends welcoming him at the Chhatrapati Shivaji Maharaj international Airport yesterday.

Atharva played a vital role by taking five wickets while defending a low score of 106 against Bangladesh to win the final by five runs at the Premadasa Stadium in Colombo on Saturday. "It's a pleasant surprise for me to see my mother and all my friends welcoming me here at the airport. i did not expect such a big gathering; my mother has never come to the airport,alt148 Atharva told mid- day yesterday.

"Whatever i am today is because of the sacrifices my mother has made. i was just nine when my father [ Vinod] passed away. it was his dream that i represent our country and my mother provided me everything through her hard work. This helped me to concentrate on cricket. Now, i want her to stop working as a bus conductor. i assure her i will take care of her and my younger brother Parth," Atharva added.

Meanwhile, Vaidehi was filled with emotion as she held on to her son throughout. "I wish Atharva's father was here to see his son fulfil his dream. i miss him [ the late Vinod] very much. I will keep Atharva's request [ to quit my job] on hold for a few more years as he still needs to settle down financially,alt148 she said.

Meanwhile, Atharva dedicated his 12 wickets in the tournament and the man of the match award in the summit clash to his late father.