Winning has become a habit for India

When a captain like Virat Kohli leads a side successfully on a regular basis, especially by occasionally plucking victory from the jaws of defeat, the team begins to believe their skipper is a miracle worker 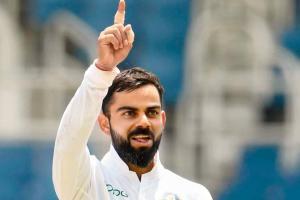 
India currently holds a commanding lead in the World Test Championship standings and is on a roll with seven consecutive Test match victories, the last four by an innings.

In addition, they're coming off an ODI series victory over Australia and six consecutive T20I wins, including two consecutive pulsating Super Over thrillers against New Zealand.

In other words winning has become a habit for the Indian cricket team.

As captain of all three formats the versatile Virat Kohli deserves a lot of credit for creating this winning mentality.

When a captain leads a side successfully on a regular basis, especially by occasionally plucking victory from the jaws of defeat, the team begins to believe their skipper is a miracle worker. Kohli has earned the respect of the team as an inspiring leader and they expect good things to happen with him in charge. When he first became captain—especially of the Test team—I thought his highly emotional temperament may be detrimental to his leadership. Instead, he's ensured that his emotions work for him and not against the team.

This is in line with his clear-thinking approach to the game. To hear Kohli talk about batting and particularly his rationale for eschewing the innovative short-form shots [he doesn't want them to corrupt his Test match style], is to understand a master who comprehends his craft.

As a captain, Kohli has led the way in many aspects of the game in addition to his incredible batting feats. His fitness level and insistence on high fielding standards has resulted in India being a much-improved side in both these aspects of the game.

The fact that he has "finished off" so many of India's victory opportunities has been an inspiration to other players to adopt a similar mentality. Rohit Sharma in particular, has benefitted from Kohli's example and his two sixes in the first Super Over win against New Zealand were a classic example of how self-belief has spread through the team.

Consistency
Another feature of India's cricket under Kohli has been their consistency; despite many changes to personnel in the three different formats they continue to win regularly. They have become a far more versatile side under Kohli and this has resulted in better overseas performances. There is also greater depth now in Indian cricket and this applies to the fast bowling stocks as well as the traditionally strong areas of batting and spinners. The signs are there that young batsmen like KL Rahul and Shreyas Iyer are maturing quickly and this is not surprising when they constantly see the high standards Kohli sets.

However, it's not just the batsmen who have benefitted from Kohli's leadership. While Jasprit Bumrah was an outstanding bowler from the moment he arrived on the international scene, quickies like Ishant Sharma, Mohammed Shami and Umesh Yadav have all blossomed from having the confidence of their captain.

Jadeja, a great addition
Likewise the spinners, while they have to battle for a place in the various teams, all perform their role when they do play. The two wrist-spinners in Yuzvendra Chahal and Kuldeep Yadav have relished the faith placed in them as wicket-takers. Even Ravindra Jadeja has become a more versatile bowler, which, with his excellent fielding and confident batting makes him a great addition in any format.

India now faces the challenge of a tough Test series in New Zealand where they are a hard team to beat. Nevertheless, Australia unearthed a few vulnerabilities in the New Zealand team that India can exploit.

The pace attack has the ability to rattle the Kiwi batsmen just as the Australians did and India has more spin options. India's batting is deeper than Australia's and I'll be surprised if Kohli and Rohit don't take a positive approach to Wagner's short-pitched tactics.

If Kohli can inspire Hardik Pandya to unleash his full potential [and he remains fit] then India will be an extremely well-rounded team. A side that will feel confident of victory whenever they take the field.

Next Story : Hardik Pandya ruled out of NZ Test series