Chasing a tricky target of 245, the Pakistan team fell way short of the mark and was all out for 137 in 43 overs, losing its 11th straight game against neighbours India in the 50-over format 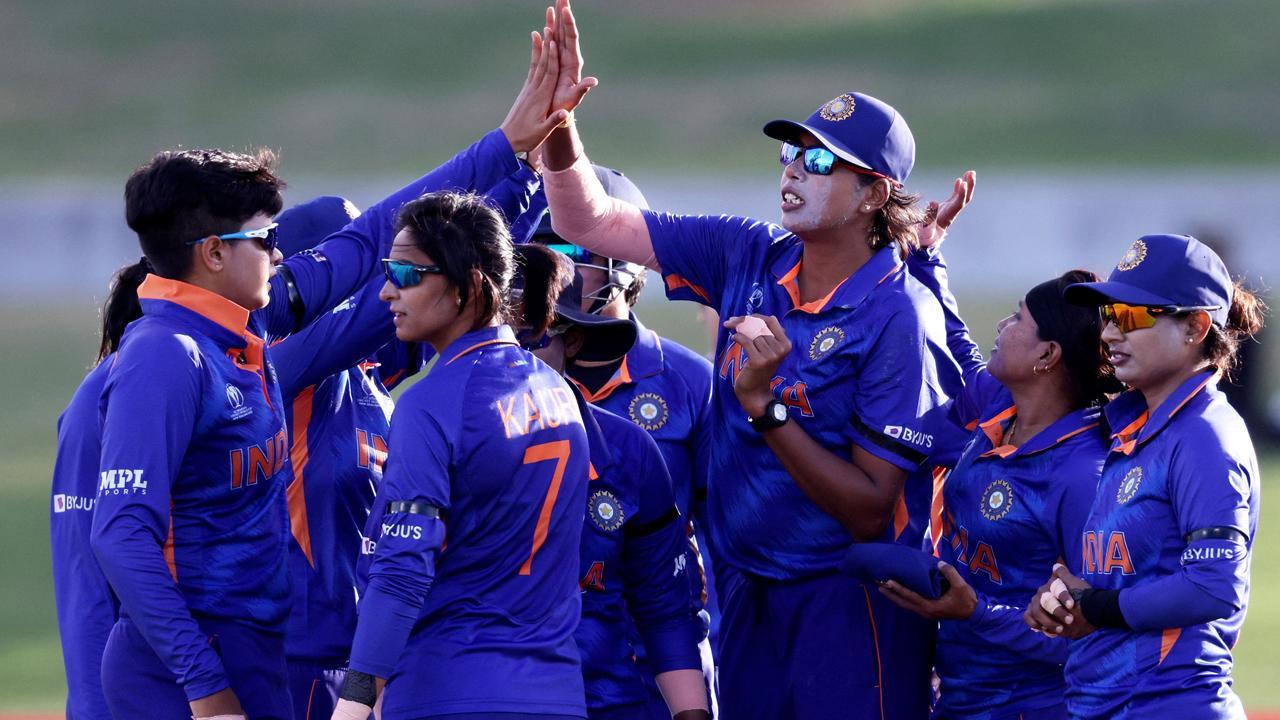 Indian players celebrates the wicket of Pakistan’s Javeria Khan during the Round 1 Women's Cricket World cup match between India and Pakistan. Pic/ AFP


The Indian team thrashed arch-rivals Pakistan by 107 runs to begin their campaign in the ICC Women's World Cup on a rousing note here on Sunday, the much-anticipated face-off ending in a no contest.

Opting to bat after the coin landed in India's favour, in-form opener Smriti Mandhana, Sneh Rana and Pooja Vastrakar struck useful half-centuries to help their team recover from an early wobble and post 244 for seven at the Bay Oval.

Chasing a tricky target of 245, the Pakistan team fell way short of the mark and was all out for 137 in 43 overs, losing its 11th straight game against neighbours India in the 50-over format.

Left-arm spinner Rajeshwari Gayakwad did the star turn with the ball, returning with excellent figures of 4/31 after her full quota of 10 overs. Seasoned pacer Jhulan Goswami bowled very well to finish the game with impressive figures of 2/29, while there were also two wickets for Rana (2/27), capping off her fine all-round show.

To start with however, the Indians found themselves under pressure after opener Shafali Verma was dismissed for a duck in the third over.

However, Pakistan came back strongly by claiming a flurry of wickets, including the scalps of skipper Mithali Raj (9) and her deputy Haramanpreet Kaur (5).
It wasn't a good outing for Raj with the willow but, by turning out in the India jersey on Sunday, the veteran 39-year-old became only the third cricketer after Sachin Tendulkar and Javed Miandad to appear in six World Cups and the first woman to achieve the feat.

Raj, though, would take her cheap dismissal in her stride as her team achieved the result it sought. After the early dismissal of Shafali, the duo of Mandhana and Deepti got together to first steady the innings and then build a foundation for Rana and Vastrakar to take their team closer to 250.

Rana (53 not out) and Vastrakar (67) shared a crucial 122-run partnership -- the highest for the seventh wicket in ICC Women's World Cups -- to help boost the India total. From the Pakistan point of view, the stand between Rana and Vastrakar hit them hard as they were hoping to restrict India after reducing them to 114 for six at one point.

Mandhana and Deepti were dismissed within a few overs of each other. Deepti missed a sweep and was bowled by Nashra Sundhu for 40, and Mandhana followed suit 13 balls later, giving a return catch to Anam Amin. The rest of the batters failed to build on the foundation laid by Mandhana and Deepti as the likes of Raj, Kaur and Richa Ghosh fell in quick succession to leave their team in a spot of bother.

Pakistan had their tails up at that stage of the game but, batting in the lower order, Rana and Vastrakar had other ideas and displayed immense grit to pull India out of trouble. For Pakistan, spinners Nida Dar (2/45) and Nashra Sandhu (2/36) snared two wickets each.

In reply, Pakistan were precariously placed at 78 for five at the halfway point in their innings, 167 runs away from a win. India were rewarded for some tight bowling early on, limiting Pakistan to just 26 for no loss at the end of the powerplay.

The pressure got to the openers as Javeria Khan departed in the 11th over, trying to take the aerial route. After that, the Indian spinners continued to keep a lid on the scoring, with Deepti and Rana taking the important wickets of Pakistan skipper Bismah Maroof and Omaima Sohail respectively.

Goswami then got into the act, dismissing the settled Sidra Ameen, who was caught behind. Jhulan struck again in her next over to remove Dar for 4 as Pakistan stared at a big defeat.

It was pleasing to see Jhulan, even after so many years, running in hard and giving everything for her team. This is Pakistan's 15th defeat while chasing in the Women's World Cup games.