MS Dhoni will always be 'my captain', says Virat Kohli 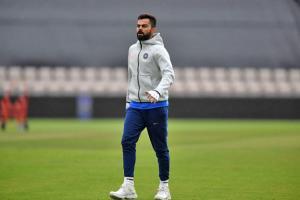 
Speaking exclusively to Star Sports on Follow the Blues – a flagship show, that tracks all the funny & serious moments from India’s tour to England & Wales for the ICC Cricket World Cup 2019.

Virat Kohli opened up about his relationship with MS Dhoni

“MS Dhoni is the man who gave me the opportunity to open the innings first time in my career, I can’t explain the respect I have for him in words. For me he will always be ‘My Captain’ because I started my career under him. There has never been a moment that I want to get up there, or I don’t want anyone to give their advice. For me, If I trust someone, believe in someone I would do anything for them. From that point of view there is trust, there is no explanation required between Mahi and me, as we both know that our priority is Indian cricket and we would do anything for the team. Honesty and intent is the main reason why Mahi and my relationship is so strong”

Virat Kohli spoke on his captaincy

“From the captaincy point of view, this world cup is different in my mind. In the 2015 world cup I was an experienced player, and in 2011 when we won I was the youngest; it’s a different feeling altogether. I was very happy but I could not sync in the emotions; the thought of playing for so many years and then finally winning was something I saw. This world cup is completely different; when you are at the central point of things, the pressure is different. When you continuously play high intensity tournaments in the International level – you need something to get you going and stimulate you in the right way, so yes, I am definitely looking forward to the world cup.”

Virat Kohli shares his experiencing on shooting for Ads

Shoots can get very hectic after a point. It’s a professional environment, and we are professionals ourselves; I understand that environment and I’m comfortable with it. I used to initially be nervous to execute what I have to do in front of the camera, but now I’m okay, so I like it. Even when the director tells me these are the questions that are going to come your way, I can never prepare for it. I just like to keep things spontaneous.

“It really depends; sometimes I’m really into love songs. I am at a stage where I don’t really need to pump myself up, anything that makes me feel happy – I listen to that. I have been listening to love songs from 2014; it switches to Punjabi, English songs – anything that has good lyrics. I cannot do hip-hop, rap; If the lyrics don’t sync with me, I can’t listen to it. It depends on what I like at that moment.”

“Normalcy for me, went away at a very young age because I started my career at an early age, but the good thing is that I have a life partner that makes me realise the importance of normalcy. When we are at home, people don’t believe the way we talk and the way we behave - they think our life is like a fairy tale but it’s not that way. I am so grateful to find a like - minded partner and someone who guides me the right way. We have been there for each other throughout this journey. Also, family members always keep things normal for me. It’s not that we do anything in system, we are pretty chill, we wake up whenever we want, be lazy on our holidays. I have a very small circle because I believe that the smaller the circle, the better it is and you would have heard this from a lot of people. You automatically filter the people in your life - The like-minded people stay together and others just drift away because after a certain stage, you can tell if someone is actually a genuine person or otherwise.”

Top stories of the day