Earlier this week the German World Cup winners contract at Borussia Dortmund was terminated a year early. He made 33 Bundesliga appearances across two seasons for the club 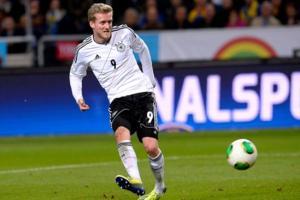 
Ex-Chelsea attacker and Borussia Dortmund forward Andre Schurrle has announced his retirement from professional football at the age of just 29. Earlier this week the German World Cup winner's contract at Borussia Dortmund was terminated a year early. He made 33 Bundesliga appearances across two seasons for the club.

The 29-year-old footballer posted a black and white picture of him lifting the World Cup and said he was open for the new future possibilities. "I want to let you know that I'm stepping away from playing professional football !!On behalf of myself and my family I want to thank everybody who was a part of these phenomenal years!," Schurrle captioned the post on Instagram.

"The support and love you shared with me was unbelievable and more I could have ever asked for! Now I'm ready and open for all the beautiful possibilities that are coming towards me," he added.

The World Cup winner won 57 caps for his country, scoring 22 times and feature for Chelsea and Wolfsburg prior to joining the Bundesliga club in 2016.

Next Story : Peter Crouch and wife Abbey Clancy live it up on yacht in Portugal