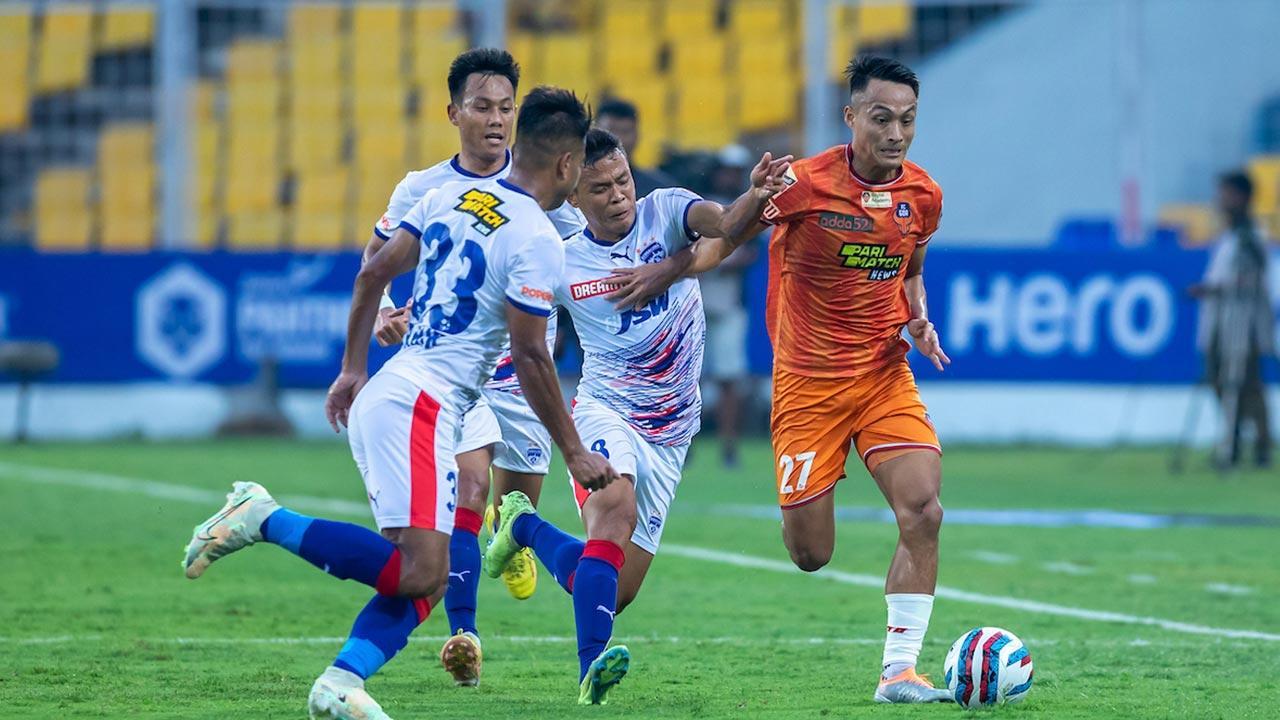 
A Javi Hernandez brace ended Bengaluru FC's five-match winless and four-match goalless run as they registered a 2-0 win against FC Goa in an Indian Super League (ISL) 2022-23 match at the Jawaharlal Nehru Stadium here on Saturday.

The Blues also nabbed their first clean sheet since their season opener as they handed the Gaurs their first home defeat of the season.

Both sides made a couple of changes to their lineups. FC Goa midfielder Edu Bedia found himself on the bench as Princeton Rebello took his place in the starting XI. The other change for the hosts included Noah Wail Sadaoui in the lineup as Redeem Tlang dropped to the bench. Alan Costa and Bruno Silva were dropped to the bench for Bengaluru FC as Aleksandar Jovanovic, and Prabir Das started the game.

In the opening couple of minutes, FC Goa pushed forward with Alvaro Vazquez, who sprinted into the box and got his shot away from a tight angle. The on-target effort was collected comfortably by Gurpreet Singh Sandhu, who had his near post covered.

Javi Hernandez broke the deadlock and ended Bengaluru FC's goal drought in the 27th minute. Anwar Ali was closed down by Roy Krishna as he brought the ball out from the defence. Krishna put Hernandez through on goal and the Spaniard calmly slotted it past Dheeraj Singh to give the Blues their first goal since Matchweek 2.

In the 37th minute, Gurpreet was at full stretch to push Vazquez's free-kick away to safety. At the other end, in first-half stoppage time, Dheeraj came darting out of the box towards the right flank and took Krishna out. The FC Goa shot-stopper only saw a yellow card for his foul on the Fijian striker.

In the second half, FC Goa started on the front foot. However, it was Bengaluru FC who doubled their advantage in the 57th minute. As the Gaurs swarmed forward, the Blues broke on the counter with Udanta Singh, who dinked it through to Hernandez. The Spaniard entered the box, rounded the keeper, and calmly slotted the ball into an empty net.

Ten minutes from time, Krishna received a long ball from the defence and tried to chip it over the keeper. The ball sailed over the keeper and was inches away from the far post. At the other end, in the next minute, Ali rocketed one toward the top-left corner of the goal. Gurpreet Singh produced a timely save as he got fingertips on it and put it behind for a corner.

The Gaurs' next match will be a visit to Mumbai City FC on December 1. Meanwhile, Bengaluru FC will return home to host ATK Mohun Bagan FC on December 3.