La Liga: 5 things you might not know about Barcelona's Frenkie de Jong

On yet another day of football trivia, we bring to you five interesting facts about Barcelona player Frenkie de Jong 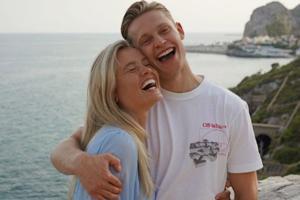 
How he continues the long Dutch tradition at Barcelona, why he wears the number 21, his friendship with ‘Appie’ Nouri…

1. Frenkie de Jong is Barcelona's 20th Dutchman
Barcelona have long had a strong connection with the Netherlands and Dutch football, going back to the days of Johan Cruyff through to Ronald Koeman and Patrick Kluivert. de Jong is the club’s 20th Dutch player, with only Spain and Brazil accounting for more in club history.

2. Frenkie de Jong joined Ajax for just €1
Frenkie arrived at Barcelona from Ajax, but while the latter is renowned for its youth system he actually came through the ranks at Willem II, joining Ajax for the symbolic fee of just €1. In exchange for allowing the budding star to leave on a free, Willem II were promised a percentage of any sell-on transfer fee and cashed in when de Jong made a big money move to Barcelona in 2019.

3. Frenkie de Jong's friendship with Abdelhak Nouri
Nouri, the Ajax youngster who tragically collapsed due to cardiac arrhythmia and fell into a coma in a pre-season friendly in 2017, was a close friend of Frenkie’s as they came through the ranks together at the Amsterdam club. de Jong often visited his friend in hospital and on one such visit mentioned the prospect of moving to Barcelona. ‘Appie,’ now out of a coma but having suffered serious brain damage, was said to have raised an eyebrow at the suggestion, a reaction which de Jong took as an endorsement of the move and as a “very special moment.”

4. Frenkie de Jong wears number 21 for a very special reason
Frenkie wears the number 21, not the first choice for many star midfielders, in tribute to his grandfather Hans who died on the day his grandson celebrated his 21st birthday. He’s worn the same number since breaking into the Ajax first team in 2016 and now at Barcelona.

5. Frenkie de Jong's not the only de Jong in La Liga
de Jong, the equivalent of ‘Young’ in English, is perhaps the most common surname in all the Netherlands. Frenkie isn’t not even the only de Jong in Spanish football, with fellow Dutchman Luuk de Jong lining up for fellow LaLiga Santander side Sevilla FC.