Nicolo Zaniolo scored in the first half, goalkeeper Rui Patrício made some big saves in the second 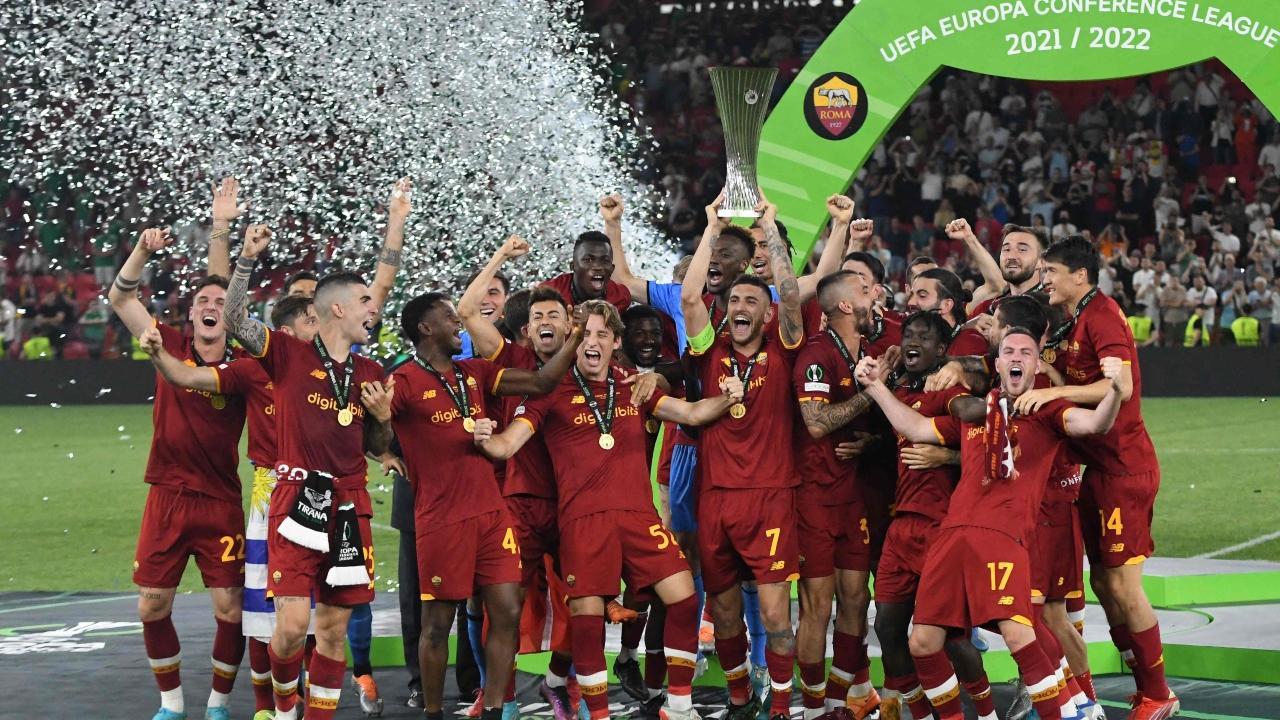 Roma's players celebrate with the trophy after winning the UEFA Europa Conference League final football match between AS Roma and Feyenoord at the Air Albania Stadium in Tirana. Pic/ AFP)


José Mourinho had described Roma as "a giant club" lacking a trophy room to match the team's social dimension and passionate fan base. Well, the Giallorossi claimed their first European title in more than six decades on Wednesday to crown Mourinho's first season coaching in the Italian capital. Nicolò Zaniolo scored in the first half, goalkeeper Rui Patrício made some big saves in the second and Roma beat Feyenoord 1-0 to win the inaugural edition of the third-tier Europa Conference League. Today wasn't work, this was history, Mourinho said.

Either you write it or you don't and we wrote it. I've been at Roma for 11 months and I realized the moment I arrived what it meant that they were waiting for this. It's Roma's first European trophy since winning the 1961 Inter-Cities Fairs Cup a tournament considered to be the precursor to the UEFA Cup and Europa League. It's also the first title of any kind for Roma since winning the 2008 Italian Cup. Now we've got to celebrate a lot, said Roma captain Lorenzo Pellegrini.

But then we've got to keep going. A real team wins then comes back even stronger than before. Besides the few thousand Roma spectators inside the small National Arena in Tirana, some 50,000 fans watched the game on giant screens at the Stadio Olimpico in Rome. At the final whistle, the fans at the Olimpico celebrated on the pitch waving banners and chanting the team's songs There were violent clashes in Tirana between fans of both clubs ahead of the final, and dozens were deported back to Italy. Two separate groups of Dutch and Italian fans clashed with police on Tuesday in the city, injuring 19 officers and five Albanian civilians. One police officer was injured from a knife attack, authorities said.

Three Italian fans and two Dutch supporters were also injured. Inside the stadium, flares were thrown onto the field and stewards removed a few fans before kickoff after an apparent fight on the side where Dutch fans were sitting. The situation appeared to be under control after kickoff. Zaniolo's goal started with a ball over the top from center back Gianluca Mancini that Zaniolo controlled with his chest. Zaniolo then pushed the ball past onrushing goalkeeper Justin Bijlow with the tip of his boot. Stupendous. Let's enjoy this moment, Zaniolo said, before gesturing to the Roma fans. There are no words to describe it. It's all for them.

Zaniolo has often been labeled as Italy's most talented young player. But he's been held back by two serious knee injuries, one of which kept him out for all of last season and prevented him from taking part in the Azzurri's run to the European Championship title. At 22 years and 327 days, Zaniolo became the youngest Italian player to score in a European final since Alessandro Del Piero's goal at 22 years and 200 days for Juventus in a loss to Borussia Dortmund in the 1997 Champions League final. An attacking midfielder, Zaniolo produced five goals and three assists in 10 Conference League games. After Zaniolo's goal, Mourinho realizing how long there was to go gestured for his excited bench players to sit and calm down.

Feyenoord came out energized after the break and quickly hit the post twice, first with a close-range effort from Gernot Trauner then with a long-range blast from Tyrell Malacia that Rui Patricio palmed off the upright. Mourinho extended his perfect record in European finals to five trophies in five matches, having also won the 2003 UEFA Cup and 2004 Champions League finals with Porto; the 2010 Champions League final with Inter Milan; and the 2017 Europa League final with Manchester United.

At the final whistle, Mourinho held up five fingers to signify his five European titles as he jumped up and down in celebration. Mourinho was also the coach who guided the last Italian club to win a European title when Inter's treble in 2010 included the Champions League.

This remains in the history of Roma, but also mine, the 59-year-old Mourinho said. "I was told that only I, Sir Alex (Ferguson) and Giovanni Trapattoni won European trophies in three different decades. It makes me feel a little old, but it's nice for my career." It was a typical Mourinho match: take an early lead then defend, defend, defend. We know that when we take the lead we're great at defending, Mancini said. In matches like these you've got to defend until the last second.

Roma had lost its two previous continental finals, defeated by domestic rival Inter Milan in the 1991 UEFA Cup and dropping a penalty shootout to Liverpool in the 1984 European Cup final in its home stadium. This is really a prize for the Friedkins, who gave this club a new identity, Roma sports director Tiago Pinto said, referring to the club's American owners. It definitely won't be the only trophy.

Next Story : FIFA World Cup: Airfare to Qatar expected to shoot up 1900 percent as Dubai expects to fill accommodation shortfall