"Even though the final against Australia did not go our way, we learned a lot from the match and have to improve upon in training," opined Abhishek on Friday 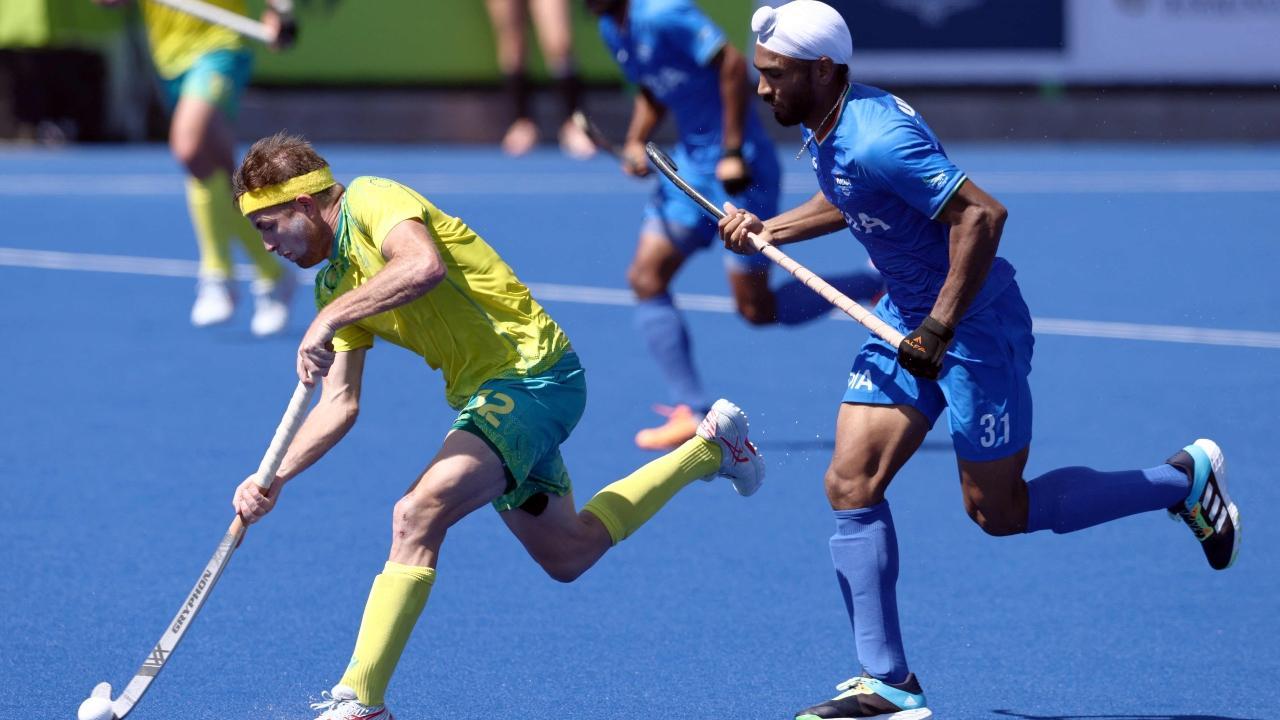 Jake Whetton vies with Singh Jugraj during the men's gold medal match between Australia and India at the Commonwealth Games. Pic/ AFP


Young India men's hockey team forward Abhishek has conceded that the 0-7 thrashing at the hands of Australia in the final at the Birmingham Commonwealth Games was a lesson that the side had to "improve upon in training".

India's hopes of clinching their maiden CWG hockey gold remained a dream as they were soundly thrashed in the quadrennial showpiece, even as Australia went on to clinch a record-extending seventh CWG gold.

"Even though the final against Australia did not go our way, we learned a lot from the match and have to improve upon in training," opined Abhishek on Friday.

The forward, who is set to turn 23 on August 15, started in all six games at the Commonwealth Games and remained an ever-present threat inside the opposition's defence as India settled for silver. He believes the tournament was a big learning experience for him.

Abhishek made his senior India debut earlier this year when the team travelled to South Africa for the FIH Pro League 2021/22 matches in February. He played 14 matches during the Pro League and displayed consistent performances, on the back of which he was selected in the Birmingham 2022 Commonwealth Games squad.

Speaking about his experiences of performing on the big stage, Abhishek, who also scored two goals at the Games, said, "It was quite a memorable experience for me to perform on such a big stage. I learned a lot about my game during the tournament, and understood areas where I can improve upon.

"Our chief coach Graham Reid had already told me before in training sessions to enjoy the games and to not take too much pressure. This advice really helped me at Commonwealth Games 2022 as I was able to focus on my natural game and was able to play freely," Abhishek added.

On his performance at CWG, Abhishek said, "My teammates and coaches told me I performed well considering it was my first major tournament of such scale. There are still a few areas where I have to improve upon, and the Commonwealth Games 2022 experience has motivated me to work even harder to fulfil those shortcomings."

India performed brilliantly throughout the tournament, until they clashed with Australia. The scored an 11-0 win against Ghana in their opening Pool B match. With a 4-4 draw against England, followed by an 8-0 win over Canada and a 4-1 win over Wales, India booked a spot in the semifinal, where they defeated South Africa 3-2 to reach the final.

On the team's performance, he said, "We performed as a team throughout the competition, despite facing tough opponents. Every match had a new challenge for us, and we were able to face it head-on."

The team will return to the coaching camp in Bengaluru on the August 29 and will begin preparation for the Pro League 2022/23 season which begins in October. India are scheduled to play New Zealand and Spain at home.

"We are eager to return to training and prepare for the upcoming competitions. We want to improve as a team, and with the World Cup next year, everyone wants to be in the best shape and form in the coming months," Abhishek added.