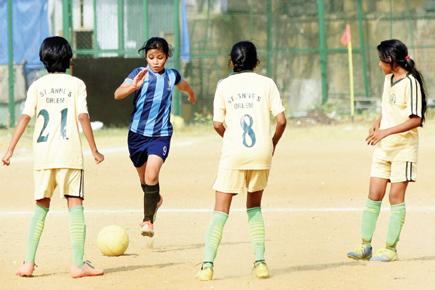 
Nine-year-old Diti Kanungo stood out among her taller and much bigger counterparts and opponents as NSS Hill Spring International (Tardeo) beat St Anne’s (Orlem) 2-0 to book a spot in the semi-finals of the Mumbai School Sports Association (MSSA) girls’ U-14 Division-II inter-school football tournament at Azad Maidan yesterday. 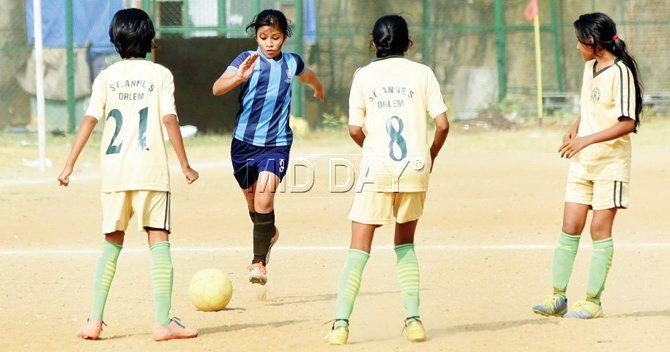 Diti scored her team’s opening goal with a neat strike from the right in the 15th minute. After the break, the Tardeo school kept up the pressure on their opponents and got the second goal in the 32nd minute through Rajlakshmi Patil — this time Diti laid out the perfect assist.

Last year, Diti represented her school in the U-12 category. However, this time round, seeing her fine form, coach Bloecher Mendes felt she was good enough to fit into a senior team. And Diti has justified his decision having previously scored, against JBCN International School, in the pre-quarterfinals too.

Diti, the youngest member of the team and probably the youngest in the U-14 competition over all, enjoys rubbing shoulders with older players.

"I started playing football last year and love it. It’s great fun to play with bigger girls — it’s quite a challenge too. I’m happy to perform for my school and hope the coach persists with me in older age groups too," said Diti. NSS Hill Spring International coach Mendes was all praise for little Diti. "She’s a fine talent. She’s very young, but very skillful all the same. She’s as good as any of the others in the team. I’m only happy to promote a youngster like her in my team," said Mendes.

Meanwhile, St Anne’s High School coach Alex Lopez admitted his players were rusty. "We looked out of touch because we have not been able to have regular practice sessions due to exams first and then vacations," he said.

Next Story : Ageless has a slender edge