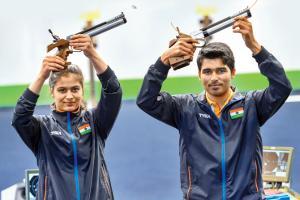 "Not a big relief, but satisfaction," said Bhaker after winning the final considering she did not win a medal in the individual events earlier in the tournament. "In the earlier events, I couldn't do well despite putting in the effort. Now, I have won a medal, so it builds hope that I can do better next time. That's why I am satisfied," added Bhaker.

She explained how she put her disappointment of the individual events behind her to shoot well in this event. "The confidence is always there that we can match our practice scores in a match. I did well in 25m [qualifying] and put in my best effort in the final but it [medal] didn't happen. There was disappointment. Then I couldn't qualify for the 10m finals. But I told myself that I can't do anything about it now, so I simply packed up and went home. The next day, I returned full of confidence that I can do well," she said.

Chaudhary, who has been in top form here, having won a gold medal in the 10m air pistol final with a world record score of 245, said he was confident going into this event. "I got a lot of confidence because my guru [coach Amit Sheoran] was with me. So, there was no pressure," said Chaudhary going on to praise his partner. "She [Bhaker] is a good shooter. I get to learn a lot from her. We tell each other, 'I will give my best, you give your best'. I have a good understanding with her," added Chaudhary.

Bhaker and Chaudhary shot a score of 483.4 in the 50-shot five-team final. They finished a clear 5.7 points ahead of the silver-winning Chinese pair of Jiang Ranxin and Zhang Bowen, who shot 477.7. Korea's Kim Minjung and Park Daehun won the bronze (418.8).