Thompson, the 2012 US Open runner-up, rolled an impressive bunker shot within three feet of the cup at the par-4 16th and holed a 15-foot birdie putt at the par-5 18th to secure his first tour triumph since the 2013 Honda Classic 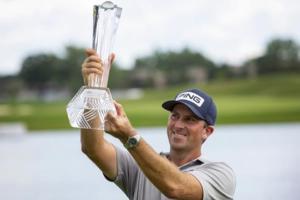 
American Michael Thompson snapped a seven-year US PGA title drought on Sunday, making birdies on two of the last three holes to win the 3M Open by two strokes. Thompson, the 2012 US Open runner-up, rolled an impressive bunker shot within three feet of the cup at the par-4 16th and holed a 15-foot birdie putt at the par-5 18th to secure his first tour triumph since the 2013 Honda Classic.

"I don't know what to say. This is so exciting," Thompson said, his voice cracking with emotion as he fought back tears. "I played such good golf today. I stayed within myself. I played within myself. This means so much to me." Thompson fired a four-under par 67 in the final round to finish on 19-under 265 to defeat compatriot Adam Long by two shots after 72 holes at TPC Twin Cities in Blaine, Minnesota. World number 218 Thompson, who said his family could not be with him to celebrate due to the coronavirus pandemic, last won 166 starts ago. His breakthrough booked the 35-year-old into next week's WGC Memphis event, next month's PGA Championship, the US Open in September and the Masters in November.

"It has been a long time," Thompson said. "To know I have security for two more years, to get in all those tournaments, it's just so exciting." Level with Long at the tee on the reachable par-4 16th, Thompson smacked his tee shot into a greenside bunker, then blasted out of the sand to inside three feet and made his birdie putt to seize the lead alone. After missing a 15-foot birdie putt on the par-3 17th, Thompson dropped his third shot just inside 15 feet and sank the putt for the victory. Long, who made the cut on the number, went 63-64 on the weekend, with his career-best 16 birdies in the last two rounds giving him a share of the lead with Thompson in the clubhouse. "Ball-striking was a lot cleaner," Long said of his weekend.

"I had more birdie opportunities. I just tried to keep the pedal down and make as many birdies as I could. "The way scoring is around here, I knew I would have to keep making birdies." Long, ranked 110th, won his only PGA title in January 2019 at the Desert Classic as a rookie. He shared second last November at the Mayakoba Classic. A third-place pack on 268 included 2011 Masters champion Charl Schwartzel of South Africa, Sweden's Alex Noren, Argentina's Emiliano Grillo and Americans Robby Shelton, Charles Howell, Max Homa, Cameron Tringale, Tony Finau and Richy Werenski.