Tiger Woods battles to 71 in third round at Memorial tournament

World number 14 Woods, a five-time Memorial champion, plunked his approach at the par-4 third into the water and made bogey, but answered with eight-foot birdie putts at the fifth and sixth 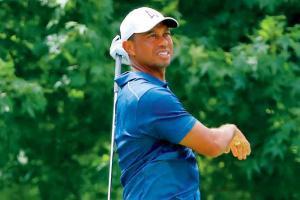 Tiger Woods plays a shot during Rd 2 in Dublin, Ohio on Friday. PIC/AFP


Tiger Woods overcame nagging back issues to fire a one-under-par 71 in Saturday's third round of the US PGA Memorial tournament, feeling better after barely making the cut. The 44-year-old reigning Masters champion, playing his first tournament since finishing 68th last February at Riviera, stood on two-over 218 after 54 holes at Muirfield Village in Dublin, Ohio. "Overall I felt I played well, controled the ball well," Woods said. "I hit one really bad shot at three, but overall it was a good solid day."

World number 14 Woods, a five-time Memorial champion, plunked his approach at the par-4 third into the water and made bogey, but answered with eight-foot birdie putts at the fifth and sixth. He fell back with a bogey at the par-4 ninth but rallied again with back-to-back birdies at 14 and 15, the latter on a 17-foot birdie putt, only to bogey the par-3 16th after missing a five-foot par putt. Woods, level with Sam Snead on a record 82 US PGA titles, said the back that bothered him in shooting 76 on Friday was "a lot better" Saturday. "That's the way it is these days," Woods said of his inconsistent body. "I was moving better today.

I felt like I did the first day. Consequently, I can make the passes at the golf ball like I did the first day. Unfortunately, I didn't make any putts today. Hopefully I can make a few tomorrow." The 15-time major champion, finishing well before the leaders teed off in the Jack Nicklaus-hosted event, said the course was playing as the legend would like. "It's tough. It's fast. It's right where they want it," Woods said.

Woods was pleased to be able to have two more competitive rounds this weekend after nearly missing the Memorial cut for the first time in 18 starts. "Playing at home and out here is so very different," Woods said. "Absolutely happy to get in a couple more rounds playing competitively."

Next Story : Model Viktoria reveals she dated Hamilton after he split with Nicole