Its getting better, I think Im going to be on the top of my game very soon. Zverev is set to compete at the ATP Finals in London next month, where he will be out to regain the title he won for the first time in 2018 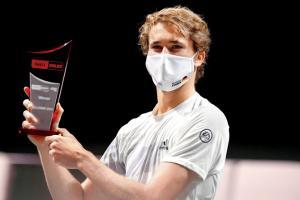 Germany's Alexander Zverev with the winner's trophy at Cologne on Sunday. Pic/AFP


Alexander Zverev claimed his second ATP indoor title in Cologne in a week on Sunday, as he cruised to a dominant, straight-sets win over Argentine Diego Schwartzman. Zverev had lost two of his previous three meetings with Schwartzman, but was unstoppable on Sunday, dispatching the Argentine 6-2, 6-1 in just one hour and 11 minutes.

"Alexander was just much better than me today. He was perfect on court," said Schwartzman. World number seven Zverev, 23, lived up to his top seeding to seal both titles on home soil in the back-to-back German tournaments. Dogged by a hip problem earlier in the tournament, the US Open finalist looked entirely untroubled as he strolled to an eighth straight win in Cologne.

"Two days ago, I wasn't sure if I was even going to finish the tournament, and now I'm here," he said, adding that his best is still to come. "It's getting better, I think I'm going to be on the top of my game very soon." Zverev is set to compete at the ATP Finals in London next month, where he will be out to regain the title he won for the first time in 2018.