All about Mohamed Hassan A Mohamed and his career achievements

Mizo has always been passionate about basketball and his father coach Hassan Abdelmoaty Amin recognised his talent and put him on the right track. 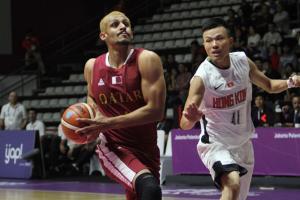 
Mohamed Hassan A Mohamed (born on August 3, 1991) often known as Mizo Amin is a professional basketball player who is currently team captain of both Al-Rayyan Sports Club and Qatar National Team in the Qatari Basketball League. Mizo started his professional playing career in 2009 but has played basketball since the age of five. Mizo has always been passionate about basketball and his father coach Hassan Abdelmoaty Amin recognised his talent and put him on the right track.

Mizo often plays in and out of the Point Guard and Shooting Guard positions. He is considered one of the top five three-point shooters in Asia (http://www.fi ba.basketball/news/who-are-the-best-shooters-in-asia).

He entered Qatar Basketball Leauge at a young age. At the age of 17 only, Mizo was the youngest player to ever be drafted into the Qatari Leauge. Throughout his career, he has been labelled 3-times an MVP, 2-times a best three-point shooter, with 22-times Gold Medal Championships.

Mizo often led in scoring during most of his played seasons. On the 37th GCC Clubs Championship scoring-list, Mizo was labelled the best three-point shooter in the Gulf Region. FIBA Asia Cup 2017 also choose Mizo as one of Asia's magnificent 7 three-point shooters in 2017.

In 2019, Mizo led his team to victory in the Amir Cup Finales and was widely regarded as one of the most effective players in the league on national television and in local newspapers.
Personal Life.

Mizo is the son of a former basketball player and coach Hassan Abdelmoaty Amin (https://www.facebook.co m/hassan.amin.752?epa=SEARCH_BOX), a successful example for young Mizo to follow when he grows up. In Middle School, Mizo was quickly recognized as the top basketball player under the age of 16 in Qatar. Upon graduation, he instantly signed with Al-Rayyan Sports Club and became the youngest rookie player amongst seasoned professional players, such as Yasseen Ismail.

Apart from his professional career, Mizo is the oldest of four children. When he was one-year-old, his parents moved to Doha, Qatar, where he was raised. He quickly got accustomed to the new lifestyle and different dialect. During his breaks, Mizo would travel the world with his best buddies and companions. Mizo got married on January 11th, 2014 to his French girlfriend, Shanya Burckel, and a year later his daughter Jude Mohamed Hassan was born. The marriage was later dissolved on November 29th, 2017.