The Frenchman has won both races in the Coronavirus-delayed MotoGP season. "It feels so good to make back to back wins," he said 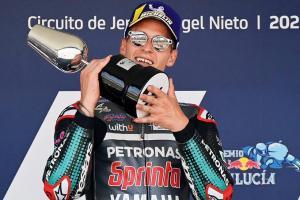 
Frenchman Fabio Quartararo won for the second straight week at Jerez on Sunday as he dominated the Andalucia MotoGP while bikes crashed and broke down behind him in searing heat.

Quartararo, on a satellite Yamaha, was followed home by Spaniard Maverick Vinales and Italian veteran Valentino Rossi, both on Yamaha factory bikes, as only 13 of the 21 starters finished. "That was tough," said Quartararo at the finish.

The Frenchman has won both races in the Coronavirus-delayed MotoGP season. "It feels so good to make back to back wins," he said.

Quartararo has a 50-point lead over the reigning champion Marc Marquez, who was absent with a broken arm. While Quartararo disappeared up the track in the heat haze, the two Yamaha works riders had to fend off challenges from the Ducati-Pramac pair of Italian Francesco Bagnaia, who climbed to second before his engine failed, and Australian Jack Miller, who crashed. Japanese rider Takaaki Nakagami (Honda-LCR) inherited fourth place.

Rossi showed that, at 41, he is still capable of competing. The seven-time MotoGP world champion has always enjoyed cheeky celebrations and this time climbed onto a barrier and punched the air in front of a empty grandstand.