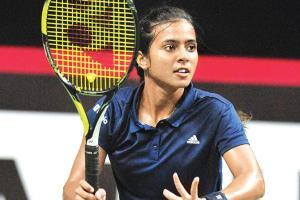 
India staved off an unexpected scare from lower-ranked Thailand as Ankita Raina won her both singles and doubles matches to lead the side to a 2-1 win in their Fed Cup opener, here Thursday.

Taking the court first, Karman Kaur Thandi, ranked 211, suffered a shock 2-6 6-3 3-6 defeat to Nudinda Luangnam, who is ranked as low as 712 in the world. The onus to bring the team back then rested on country's number one singles player Ankita, who lost the first but regrouped to secure a 6-7 (3) 6-2 6-4 win over Peangtarn Plipuech in the second singles.

With scores 1-1, the doubles became the decisive rubber and captain Vishal Uppal fielded both the singles players. The combination of Ankita and Karman then had to battle hard for two hours and 38 minutes to go past the fighting Thai combo of Peangtarn and Nudinda 6-4 6-7(6) 7-5 in a thriller.

"I know my opponent was tricky. I have beaten her and lost to her as well. More than my opponent I had to fight mentally the cold which I don't like, and I am really happy I have passed my own test," Ankita said.

Uppal said India didn't play to its potential but showed great fightback to clinch the tie. "Thailand played exceptionally well today but we dug deep to beat them. Our lapse in concentration made our task tougher for us," Uppal told PTI after the match.

"Karman was not at her best today and Ankita also played patchy. In the doubles we went from almost winning at 6-4 in the tie-break to almost losing 3-5 in the final set." India next play hosts Kazakhstan on Friday.