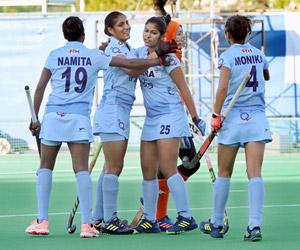 The Indian women's hockey team continued their winning form as they beat Malaysia 2-0 in their last Pool A match of the Asia Cup 2017 here at Kakamigahara Kawasaki Stadium on Tuesday. The effort registered India's third consecutive win in the Pool stage ensuring they go into the quarter-final as table toppers with nine points. It was late goals by Vandana Katariya (54') and Gurjit Kaur (55') that saw the team through. In their previous match, India set up a sensational 4-1 win against higher-ranked China. 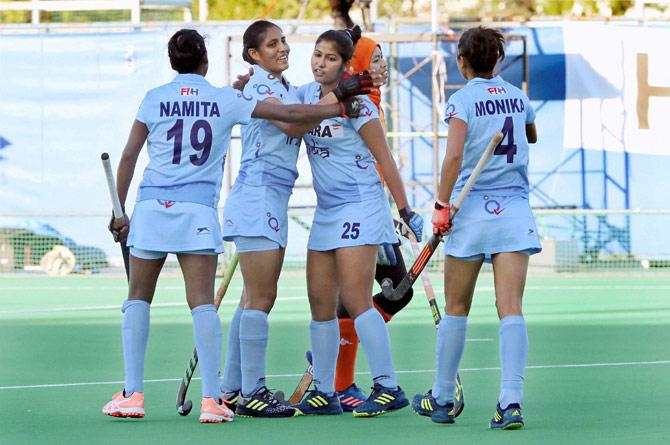 Indian players celebrate a goal against Malaysia during their match at the Women’s Asia Cup Hockey 2017 at Kakamigahara Kawasaki Stadium on Tuesday. Pic/PTI

The first quarter saw both teams play cautiously. With Malaysia playing defensive hockey, India threaded patiently without making any unforced errors that would bring advantage to Malaysia. Having ended the first quarter in a stalemate, Malaysia put India on the back foot when they won the first penalty corners of the match in the initial minutes of the second quarter. However, an alert Rajani Etimarpu made a brilliant save. The next few minutes saw both teams trade penalty corners. While India earned one penalty corner, Malaysia were awarded two but nothing came off it.

Both teams played out evenly in the third quarter too. Another penalty corner won by Malaysia was not capitalized by them, ending the third quarter too in a stalemate. However, India held their nerves to turn the match around in the fourth quarter as they came up with a strong finish. First it was forward Vandana Katariya who scored a sensational field goal in the 54th minute to take a 1-0 lead. The following minute saw dragflicker Gurjit Kaur convert a penalty corner taking India's lead to 2-0 that put pressure on the Malaysian unit. Though Malaysia had won a PC at the start of the fourth quarter, their poor conversion dented their hopes. Though they made desperate attempts in the dying minutes of the match, Indian defence held sway to emerge victorious.