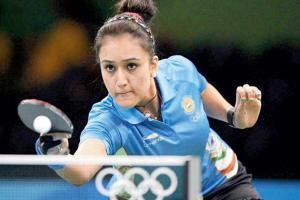 Indian table tennis' poster girl, Manika came back from a game down to edge past World No.60 Sabine Winter of Germany 2-1 (4-11, 11-3, 11-7) in a thrilling encounter to help Smashers race to an early lead. Playing in front of her home crowd, Manika conceded the opening game in a rather meek fashion. But she made a strong comeback and fired in a total of 10 winners in the next two games to seal the match and send the fans into a thunderous applause.

Skipper Harmeet Desai, however, drew level (3-3) for Mavericks in the next match with a prolific win over World No 27 Yoshida Masaki of Japan 2-1 (11-8, 10-11, 9-11). In the mixed doubles encounter, captain Sathiyan Gnanasekaran and Sakura Mori recorded a pulsating 10-11, 11-9, 11-2 victory over the pair of Harmeet and Doo Hoi Kem to help Dabang snatch the lead back.

With Smashers leading 5-4 after three matches, Cedric Nuytinck further swelled the scoreline in their favour with a clear 2-1 (7-11,11-3,11-7) win over World No 33 Kou Lei. World No 13 Doo Hoi Kem brought the Mavericks right back into the tie with a dominating 3-0 victory over Sakura Mori.

With the home side trailing 7-8, it was down to Sathiyan to win a few points for his side. But Mattias Karlsson, the World No 18 from Sweden, proved too much for the Indian and underlined his authority, turning in a sterling performance to win 3-0 (11-7, 11-8, 11-8).

It proved to be Sathiyan's first singles defeat in the UTT. In the last encounter of the night, Mouma Das completed the domination with a convincing 2-1 (10-11, 11-8, 11-9) victory over World No 38 Adriana Diaz of Puerto Rico.