Sharapova on mental health after failed drug test: I felt so small 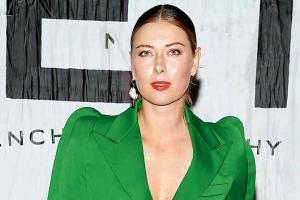 
Russian tennis beauty Maria Sharapova spoke about her mental health issues after she revealed a failed drug test at a press conference held in Los Angeles on March 7, 2016, according to a report in sportsfinding.com. Later, the International Tennis Federation handed her a 15-month ban for taking performance-enhancing drug, meldonium.

In the presser, Maria had said she was taking the drug ever since 2006 and didn't realise that it became a banned substance by the World Anti-Doping Agency (WADA) at the start of 2016.

"After the appearance [press conference], I deleted all the social networks from my phone, to protect myself from opinions and judgments and to stay sane. I have never worried about what people think of me, but suddenly, with what happened, I did start to care. It was very unpleasant to feel so small," the former World No. 1 said in a Movistar+ documentary.

Meanwhile, Maria is grateful to her parents who were by her side during the tough phase. "My mother [Yelena]...spent weeks by my side so that I was accompanied. My father [Yuri] also accompanied me a lot to make sure that nothing went wrong," she added.