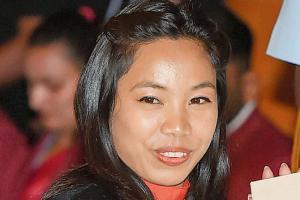 
Former world champion Mirabai Chanu produced her personal best but missed out on podium by a whisker, while Youth Olympics gold medallist Jeremy Lalrinnunga went on a record-smashing spree at the Asian Weightlifting Championship here Sunday. The 24-year-old Mirabai lifted 86kg in snatch and a personal best of 113kg in clean and jerk for a total of 199kg in the women's 49kg event to finish on fourth position.

Her earlier personal best total in 49kg was 192kg in the EGAT Cup in Thailand in February. In a remarkable performance, 16-year-old Jeremy secured second place in group B of the 67Kg men's event. During his record-smashing spree, he claimed three world marks. Earlier in the day, Jhili Dalabehera opened India's medal account, claiming a silver medal in the women's 45kg category. However, 45kg is not a Olympic weight category. The points gathered from this event will come in handy when the final rankings for 2020 Tokyo Olympics are made next year. Unfortunately Mirabai missed the bronze as China's Zhang Rong with the same total of 199kg (88kg+111kg) finished third under new rules, which came into effect in 2017. Under these rules, the competitor who has a lower clean and jerk result (that means higher snatch result) will be ranked higher in the classification of athletes for total lift.

The gold medal went to Hou Zhihui of China who produced an effort of 208kg (92kg+116kg) while North Korea's Ri Song-gum clinched the silver, lifting 200kg (86kg+114kg) in the gold level Olympic qualifier. After clearing 86kg in her snatch, Mirabai began her clean and jerk with a 109kg and then lifted 113kg successfully. But in her third attempt, the Manipuri could not lift 115kg and that cost her dear. Had she been successful in her attempt to lift 115kg, she would have won a silver with a total of 201kg.

Mirabai, however, picked up a bronze in clean and jerk while she was fourth in snatch. In World Championships and continental championships, medals are awarded separately for snatch, clean and jerk, and total lift. But in the Olympics, medals are awarded only for total lift. This was Mirabai's second international competition in this category after the International Weightlifting Federation re-jigged the weight categories last year. She was earlier competing in 48kg. She had missed the World Championships last year, a gold level Olympic qualifier, owing to a back injury which had also forced her out of the Asian Games in Jakarta. Mirabai returned to action in February, clinching the gold medal in 49kg at the EGAT Cup in Thailand, which was the first of the six Olympic qualifying events for her.

Jeremy gave a power-packed performance, smashing the Youth World and Asian records in snatch, clean and jerk and total lift with an effort of 297kg (134kg+163kg) to be placed second in his group behind Pakistan's Talha Talib, who lifted 304kg (140kg+164kg). The final standings for the men's 67kg event will be known after group A competition on Monday. Jeremy, in fact, broke 15 records in total, combining national and international marks. He smashed six international records -- three youth world and three youth Asian -- and nine national records -- three youth national, three junior national and three senior national. The Mizoram weightlifter pulled off clean lifts in two of his three attempts in snatch (130kg, 134kg) to set a new youth world record. The earlier youth world record was also in Jeremy's name when he had lifted 131kg in the EGAT Cup in Thailand in February.

Jeremy then lifted more than double his body weight (157kg, 163kg) in two successful attempts in the clean and jerk, and in the process obliterated Kazakhstan weightlifter Saikhan Taisuyev's youth world record of 161kg. It was Jeremy's personal best and 9kg more than his 288kg youth world record effort in the EGAT cup, where he won the silver medal. It was his only second international competition in 67kg after the international federation added this weight category last year for the Olympic Games and other events. Jeremy also smashed the 67kg national senior record in snatch, clean and jerk, and total lift.

He smashed his own snatch record of 131kg while he erased Gulam Navi's clean and jerk record of 160kg to better his own total lift record of 288kg. The Asian Championships is a gold level Olympic qualifying event, the points from which will be counted when the final rankings for Tokyo 2020 cut are done. Jeremy had won a gold in the Buenos Aires Youth Olympics in October last year in 62kg category with a total lift of 274kg (124+150). Jhilli, a Junior World Championship bronze medallist, lifted 162kg (71kg+91kg) to finish second behind Vietnam's Vuong Thi Huyen who lifted 168kg (76kg+92kg). The bronze medal went to Mary Flor Diaz of Philippines for her 158kg (69kg+89kg) effort. On Saturday, Muthupandi Raja finished 13th in men's 61kg category with a total lift of 265 kg (117kg+ 148kg).

Next Story : Will be hard to return to practice court, says Rafael Nadal