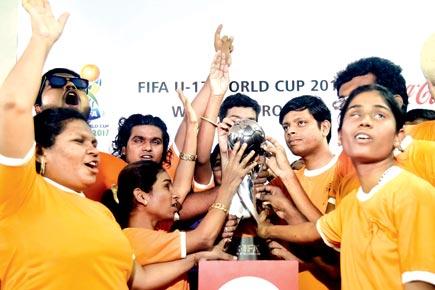 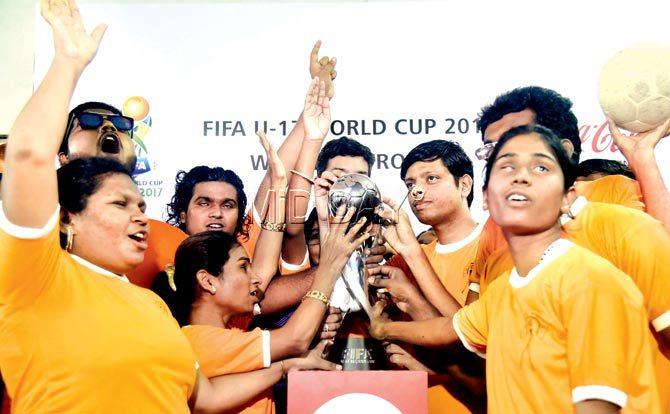 Few members of the national blind football team were left spellbound when they got a chance to touch the FIFA U-17 World Cup at the National Association for the Blind (NAB) premises in Worli yesterday.

The event was organised by Coca-Cola as part of FIFA's Trophy Experience.

Among the players who were part of the once-in-a-lifetime experience was Rahul Navghane, who has been playing for the team since 2012.

'Awesome experience'
"Getting to touch the World Cup was an awesome experience. We got to touch a trophy which only winners of the tournament get. I can't tell you how fortunate I feel," said Navghane.

Women's player Tejaswini Pawar had never dreamt of this day. "We rarely get to witness such events. We were told on Sunday that we would get to touch the World Cup trophy. I was just waiting for this day. Initially, we were allowed to touch it for 30 seconds, but we felt it for more than a minute. I couldn't have asked for more," said Tejaswini, who shifted to Mumbai from Sangli six years ago.

For Madhuri Satpute, the moment will always remain etched in memory.

"So far, we have just heard how a trophy for a big event looks like.

"Somebody explains to us in words, but touching and feeling the trophy today was just amazing," she said.

'Moment to cherish'
Coach of the blind team, Kiran Role remarked: "It's not everyday that they witness such moments. You never know when they would get a chance to do it again. They can cherish this moment. We explain to them how a trophy looks like, but to touch and feel it is a completely different experience."