Djokovic won 65 per cent of his second-serve return points (13/20), showing great consistency. With his sixth win in as many ATP matches against Schwartzman, the 33-year-old equalled Andrey Rublevs Tour-leading total of 40 wins this season 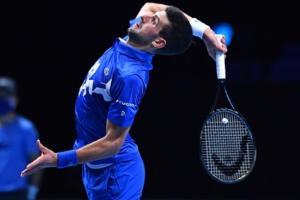 
World No. 1 Novak Djokovic defeated Diego Schwartzman 6-3, 6-2 in his opening ATP Finals match at the O2 Arena here on Monday. This was his 12th straight victory in opening matches of the tournament.

Djokovic's only loss in an opening match at this event came in his tournament debut in Shanghai in 2007.

"Back in 2007, [it] was my debut in Shanghai and I lost all three matches in the group... I think the format allows you really, even [if] you lose a match, to still have a chance to qualify for semifinals," Djokovic said after his match that lasted for one hour and 18 minutes.

Djokovic won 65 per cent of his second-serve return points (13/20), showing great consistency. With his sixth win in as many ATP matches against Schwartzman, the 33-year-old equalled Andrey Rublev's Tour-leading total of 40 wins this season.

"The beginning of the match wasn't that great for me. He broke my serve in the third game and I managed to break [back]. It was a close encounter until I broke his serve at 4-3 and managed to close out the first set," said Djokovic.

"In the second set, I started swinging through the ball a little more [with] a bit less hesitation from both corners. I was very pleased with the way I played, especially in the second set," he added. The ATP Finals brings together the best eight players of each year.