Following the conclusion of 10-player round-robin league, the top-four will move into the semi-finals, which are currently scheduled to be played from July 31-August 2. The final will be played from August 3-5 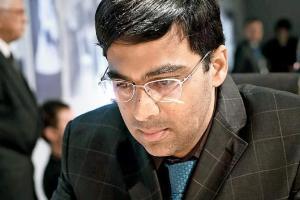 
Indian grandmaster Viswanathan Anand ended his campaign at the Legends of Chess tournament with eight losses, the latest coming against Vasyl Ivanchuk of Ukraine.

The four games of the ninth-round contest on Wednesday between Anand and Ivanchuk ended in draws, forcing the match into the Armageddon (a tie-breaker), which also ended in a stalemate. However, the Ukrainian, who is Anand's long-time rival, emerged victorious as he played black in the decider.

Anand finished ninth in the standings with solitary win coming against Israel's Boris Gelfand. Apart from Ivanchuk, the 50-year-old, who was making his maiden appearance on the Magnus Carlsen Chess Tour, had suffered defeats against Ding Liren, Ian Nepomniachtchi, Peter Leko, Peter Svidler, Magnus Carlsen, Vladimir Kramnik and Anish Giri in the competition.

Legends of Chess pits Carlsen, Liren, Nepomniachtchi and Giri, semifinalists at the Chessable Masters which is also a part of the Magnus Carlsen Tour, against six legends aged 40-52, who have been at the top of world chess at various points in their career.

Following the conclusion of 10-player round-robin league, the top-four will move into the semi-finals, which are currently scheduled to be played from July 31-August 2. The final will be played from August 3-5.

The winner of this event will qualify for the $300,000 Grand Final scheduled from August 9 to 20.

This story has been sourced from a third party syndicated feed, agencies. Mid-day accepts no responsibility or liability for its dependability, trustworthiness, reliability and data of the text. Mid-day management/mid-day.com reserves the sole right to alter, delete or remove (without notice) the contevnt in its absolute discretion for any reason whatsoever

Next Story : Ash Barty pulls out of US Open due to COVID-19 fears