The idea of combining with Sharath came during this year’s National Championship, where Sreeja and Sharath won their respective singles titles. Sreeja’s coach Somnath Ghosh requested Sharath to consider Sreeja as his mixed doubles partner 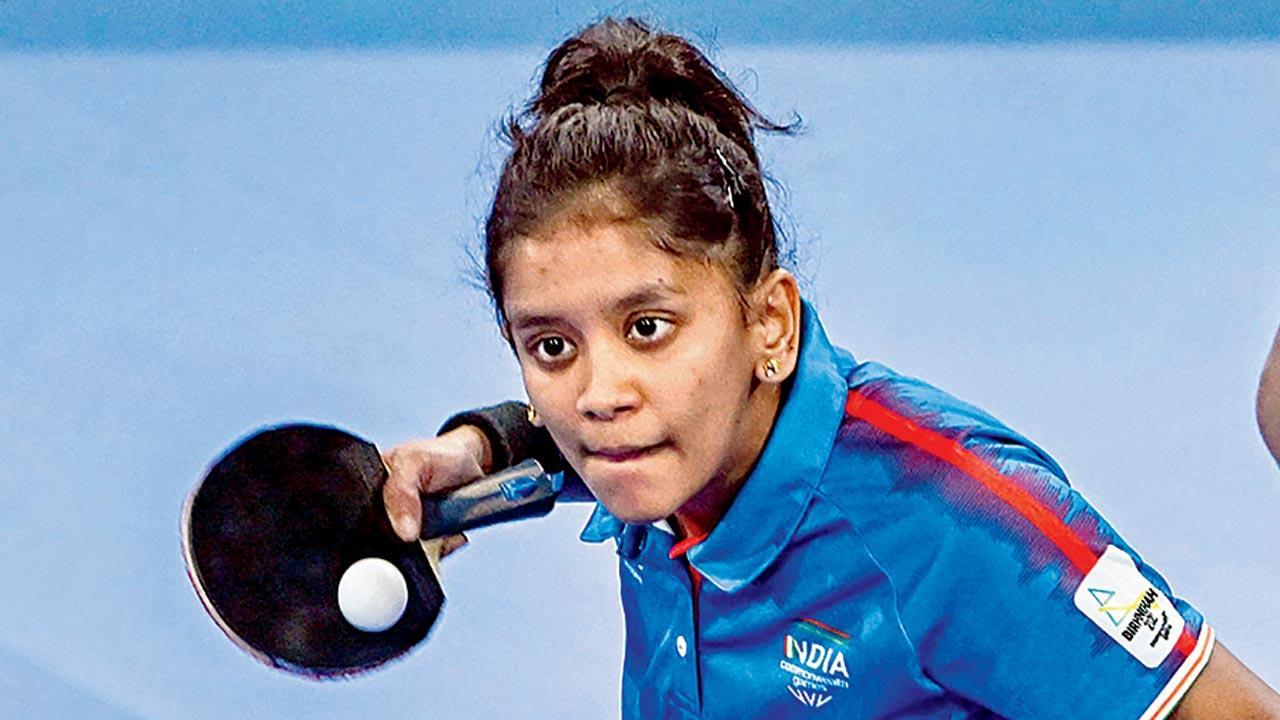 Akula Sreeja during the mixed doubles final on Sunday. Pic/PTI


Little-known Akula Sreeja, 24, who charmed her way to glory at the Birmingham Commonwealth Games, was in tears one night when she lost to Singapore’s Tianwei Feng, an Olympic medallist, in the closely-contested singles semi-finals. But the next night, the Hyderabad paddler was on Cloud Nine, having made history by winning India’s first ever mixed doubles table tennis gold alongside her idol and Sharath Kamal, whom she refers to as Anna (big brother in Telugu). The Indian pair defeated Malaysians Javen Choong and Karen Lyne 11-4, 9-11, 11-5, 11-6 in the final.

“Winning a gold in my maiden CWG appearance is huge. I’m grateful to Sharath Anna for guiding me throughout. To be honest, we went into the mixed doubles competition without enough practice sessions because of the tight schedule. The last time I played with Sharath Anna was way back in 2019,” a delighted Sreeja told mid-day.

The young paddler said she went numb atop the victory podium as the national anthem played during the medal ceremony. “On the podium, Sharath Anna turned to me and said, ‘This gold is for you.’ I was in tears. He is my role model and teacher. What I like about his game is that he always plays fearlessly. And as a partner, he never puts pressure on you,” added Sreeja.

The idea of combining with Sharath came during this year’s National Championship, where Sreeja and Sharath won their respective singles titles. Sreeja’s coach Somnath Ghosh requested Sharath to consider Sreeja as his mixed doubles partner. “Sharath Anna agreed straightaway, even before the team for Birmingham was decided. The National title was a confidence-booster. I worked on my fitness and that’s the reason I could play so many back-to-back matches, some of them seven-setters,” she said.

Speaking about their mixed doubles run at the CWG, Sreeja said: “I played fearlessly knowing Sharath Anna was by my side. After our semi-final win, I was in a trance for a moment before Sharath Anna lifted me in celebration. Our tough quarter-final win against England, gave us the belief that we could go for gold.”

The gold medal has instilled a new confidence in Sreeja, who now fears no opponent or nation, including powerhouses like China, Japan, Korea, Singapore and Malaysia. “There is a self-belief that we can beat any player in the world. The fact that I came so close to beating a top player like Tianwei Feng in the singles semi-finals, has given me the belief that we can dream of medals not only at the Asian Games, but also at the Olympics,” she concluded.

Next Story : Mumbai hockey fraternity disappointed at India’s 0-7 drubbing by Oz in CWG 2022