Activist Laxmi Narayan Tripathi and bodybuilder Aryan Pasha talk about finding love when they least expected it, and embracing their trans identities 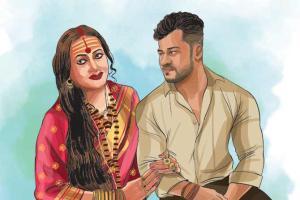 
Aryan Pasha was a 23-year-old law student when he first met transgender activist Laxmi Narayan Tripathi at a queer convention in Delhi. If Pasha was quiet and dreamy, Tripathi was fiery and outgoing. Despite their contrasting demeanours, the two hit it off at get go. So much so, that their 14-year-age difference ceased to matter. "We would keep running into each other at events, and she would flirt [with me]. Yes, I was a little awestruck but I never reciprocated the romantic overtures because I was not interested in dating... Not her, but anybody." At the time, Pasha was still transitioning—he was born a girl, Naiyla, in a well-to-do family in Delhi. Tripathi, by then, was already a formidable figure in the transgender community.

The two eventually went on to date different people.

Pasha, a lawyer by degree, became the first Indian transgender man to win a prize at a bodybuilding event last year. He had gone through three serious relationships to realise that he was better off single. And Tripathi was "almost married" to a certain Vicky Thomas. Her liaisons are chronicled in her confessional biography Red Lipstick: The Men in My Life co-authored by Pooja Pande in 2106. "I was open about Thomas because I was so invested in him. There was never a need to hide anything," she says. The fairytale romance went south when Thomas got abusive, she adds. "Curiously, the stormy relationship propelled me towards Aryan. He became my support system." The more abusive Thomas got, the more she was drawn towards Pasha. "The thing is, being a public figure I had to be careful about who I was pouring my heart out to. There are enough people with crab mentality. But with Aryan, I had a strange level of comfort. I knew I could trust him." The two would speak over the phone and meet when in each other's city. "I knew she was going through a hard time. All I could do was listen. But thanks to my excellent listening skills, I was hauled from margins," he laughs. In 2016, after completing his law degree in Mumbai, Pasha moved to Delhi and started working on a transgender project with advocacy group, Multiple Action Research Group (MARG). It's during this time that his friendship with Tripathi intensified.

And now, after over a year of courtship, the two are at a point where it's safe to say that they have found love. They have discussed marriage even. Being polar opposites, Laxmi wants a big, fat wedding, while Pasha wants a low-key court marriage.

For Tripathi, it's almost like life has come a full circle. The two now live at Pasha's Vivek Vihar home, where they often host intimate dinner parties for close friends and family. "He gets along like a house on fire with my mother," says Tripathi. While Pasha has received the green signal from his mother, his father is yet to come around. "He can't get over the gaping age difference between us," he says. Both concur that age was never the bone of contention. Not for them, at least. Their closeness did get tongues wagging though, even within the queer community. A 27-year-old bodybuilder living in with a powerful, 41-year-old transgender activist made for juicy gossip. "I've heard all sorts of nasty comments. Fortunately, I am doing well for myself, or else they would have accused me of being with her for money," he laughs. Both have learnt to take the comments in their stride.

The first time he introduced her to his friends, they were amazed to see how "crazy" she could be. "Going by her public persona, they were probably expecting her to be serious and uptight. She might be in her 40s, but she can behave like a silly 16-year-old," says Pasha. "I think I'm the more mature one here." Their banter is constant and it's something Tripathi adores. It's taken her a while to reach "the happy space". "I was an ocean of tears for almost five years because I was abused physically, mentally and financially. It wasn't easy walking out on Thomas because you're worried about what people will say. As a woman, you are wary of being blamed for the failure of the relationship. It's no different for a transwoman." A search on Google still shows Thomas as Tripathi's "husband". "He had taken my phone and updated my FB status to 'married', when we were only dating. News sites picked it up. It was Lok Sabha elections at the time, and I was advised on keeping mum because we did not want voters to get distracted by my personal life." Till date, she considers it her biggest mistake.

Having a transman as a partner has helped. "We understand each other's journey and struggle," says Tripathi, who was born in 1979 in Thane. She had a difficult childhood scarred with abuse by a close relative. That's before she chose to channel the pain into constructive pursuits. "Never did the trans element come in the way of romance. In all my relationships, the girl was always intent on marriage. I was the d****bag," admits Pasha. For somebody who feared the M-word, Pasha says he has taken himself by surprise by choosing to embrace marriage. "As cliché as it sounds, when you meet the right person, you take the plunge."

Next Story : Cookbook Dishoom is filled with food and flavours