A mushroom enthusiast is helping restaurants and retail chains look beyond popular varieties with a startup that grows and teaches you how to grow, everything from oyster to reishi 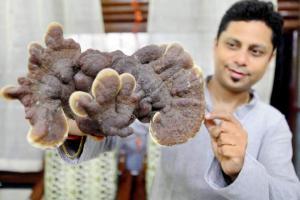 
Rohhaan Gawde's entry into mycology happened by chance when he landed a job with a commercial firm that provided training to mushroom growers. This was 15 years ago when a small section of nature enthusiasts, manufacturers and chefs in Mumbai were waking up to the fascinating world of fungi. "Technically, I was an outlier because I hadn't studied the species formally, but I rode the wave. I was at the right place at the right time," he says. The interest prompted Khar-based Gawde to take up a project at the Pune Agricultural University, where he learnt the basics and began working closely with local farms. In 2015, he went solo and launched The Mushroom Company, a consultancy that specialises in premium varieties of mushroom.

Gawde, 38, is now one of Mumbai's largest mushroom vendors, supplying gourmet varieties like shiitake, oyster, and milky buttons to leading hospitality establishments and retail chains. Like a scout, he goes foraging every couple of months with the help of local experts. His recent project took him to a farm in Imphal, where farmers grow fresh shiitake. "Mushrooms can sprout anywhere as long as the conditions are favourable. They are climate-smart plants." Having said that, cultivating these varieties is a challenge because a slight change in humidity and temperature can affect production. Which is why he has set up Rohini Farms, a state-of-the-art facility in Lonavla. "I realised that if I have to supply in bulk, I will need a dank chamber where the temperature can be regulated. I cannot depend on seasonality."

Some, like oyster mushrooms, are easier to grow because they thrive indoors with temperature ranging between 24°C and 26°C. In this, they cultivate three varieties; blue, pink and grey. "While pink oyster mushrooms have a savoury, meaty flavour, the blue ones have a bittersweet umami taste. The grey is distinctly woody," he explains. It took a while before Gawde could convince retailers to invest in his venture, "because most were still fixated on button mushrooms". He says the white and brown mushrooms continue to be the most popular, thanks to their mild flavour and propensity to blend with what they are added to. 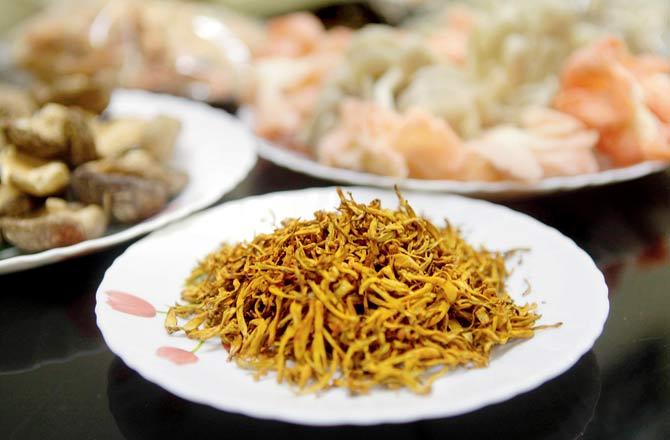 The pink oyster mushroom has a meaty flavour

Gawde's educational-cum-promotional activities at supermarkets included cooking little-known varieties with customers and asking for feedback. He would also sell mushroom growing kits, which means that all the difficult work of inoculating the plants with spores would be done in a lab, making it easy for the average Joe to grow mushrooms at home.

The efforts have borne fruit, with growing demand not just for oyster and shiitake, but also reishi, which can be made into coffee that comes with health benefits. It's a premix powder containing Arabica coffee and dried cordyceps mushrooms that have been boiled and liquefied into an extract. And, the experimental variants don't come cheap. Parisitic fungii like Ganoderma lucidum or lingzi mushroom and Cordyceps that are frequently used in traditional Chinese medicine cost R3 lakh upwards. The fungus lives on certain caterpillars in the high mountain regions. "We call them Himalayan viagra because it's known to improve your sex drive. They are also used to treat kidney damage, asthma and hepatitis B."

Despite being in the business for a while, Gawde still feels like a rookie. "There's so much we don't know about this complex network of fungi. Without them, we wouldn't have a critical food."

Next Story : The original community tables