Mandira Bedi on a handful of a daughter, how she has helped her relationship with son Vir evolve, and being ready for motherhood at 48 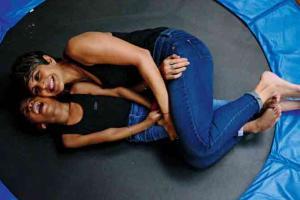 
I have often been asked how I can multitask, and strike a work-life balance, despite my hectic professional career. I used to say, it's because I have only one husband. Then came, "I have only one son". Now, I have two children, and my work has picked up again [after the lockdown]. I am travelling and shooting at least two days a week. To do this while being a parent to two kids… Man!

But, Raj [Kaushal, husband] and I had long thought of adoption. It was when we were in fact, dating, that we had first discussed it. We thought it was a cool thing to want to do. But, to build the resolve to adopt a child and follow through, we realised, was a different story. My first child, Vir, was born late. It was already 2011 and I realised that my biological clock was ticking. We had been married 12 years before he came along. But, we had known that we'd go through with adopting a child, and finally managed to start the process three years ago. According to CARA's [Central Adoption Resource Authority] rules, when the combined age of both parents is above 90, they cannot adopt a newborn baby. But, Raj and I were fine with that, since we were keen on a toddler.

I am guessing that for a childless couple, the determination to follow through with the process, which is a tedious one and involves paperwork, is strong. Our resolve took a backseat somewhere along the way, I think, although the intent was in place. Things were moving very slow on the procedure front.

And, then suddenly, something moved inside me. And it had to do with the lockdown. My need [for the child] grew stronger. I got around to following up on the process as if I was on warpath.

A couple is asked to pick three states from where they'd like the child to be, and we had selected random names. I realised that if we didn't choose and, instead, agreed to a child from any state, our case would move up the rung and things could move faster. We did this, and the wheel turned.

CARA shares a picture of the child who has been matched with you. Raj and I had decided that we wouldn't let the photo become a determinant. We were going to say, "yes". By the time we were sent her photo, it was July. She looked like a little imp. Next, we could do video calls with her. We'd have the every day simple conversation, "what did you eat?" "what's your favourite colour?" "what did you do today?" But these conversations are hard to have at the beginning. Most of the times, kids are being promoted [by staff around]. It's hardly ever natural. But at least, she got to see our faces.

Tara comes from Tikamgarh in Madhya Pradesh, a town that's five hours away from the nearest airport. At the time, it was the height of the lockdown, and Tikamgarh also had a few positive Coronavirus cases. When Raj made it to the centre to meet her, he said, she sat on his lap and said, "Chalo." She was all set to go with him. She was not sad to leave [the centre] and had no tears.

Vir and I were waiting for them at the airport. When she arrived there, I saw this tiny person, in a weird dress and plastic hat. On the flight to Mumbai, she sat on my lap and stared at Vir the whole time. Vir didn't seem like he was going to be warm towards her. We had started the adoption process when he was six, and he was excited back then. But now, at nine, he was a bit like, "I am not sure how I feel about this".

On the first day back home in Mumbai, she didn't speak at all. She nodded when we asked her anything. And at bedtime, there were a few tears. But by the next day, she was brighter.

Vir has warmed up to her now; he introduced her to his class at school on Zoom the other day. When he is "at school" via online classes on weekdays, he hates her, but by the time the weekend comes, he is chasing her around the house. He sees her as the pesky sister.

As a parent, I have had to strike a new balance. Vir told me the other day, "I feel jealous when you tell her, 'good girl'." So, I am now paying him more attention too. I decided to take a few courses on parenting, and they have given me new ways and tools to deal with the change in our lives. I play a game called Secret Box where you put 15 to 20 items in a box, put a timer on, and just be with the child. I do this with both my kids. Vir usually chooses the colour pencils and creates art. Tara goes for the play dough. Nobody else but the child and I are together at this time.

I remember, when we used to be on video call, and I had once asked Tara what colour she liked best, she had said pink. But, I realised she didn't even know what colour that was. We have now taught her how to identify colours, and taken her through numbers and the alphabet. She talks a lot and is very observant. She will say, "oh, you are wearing a saree", or when Raj is away for work, she says, "Papa is not there for dinner. Does he sleep in office?" She asks a hundred questions.

Raj and I have different parenting styles. I am the sort of parent who is always there. Raj delegates. But I too have to come away for work. And while Vir is used to not having me around, Tara was shocked the first time I left. But then, I explained to her that mama works, and will be back in the evening. She told me, "jaldi aana".
I don't know her story [the past] but adopted children tend to have abandonment issues. This is Tara's third home. She has passed through the home she was born in, then the adoption home, and now our home. So, our main goal right now is to make her feel as secure and safe as possible.