Political journalists and authors tells mid-day, Uddhav Thackeray still has a fighting chance to reclaim Maharashtra from a party that’s perceived as one of outsiders in a hurry to undermine Marathi identity 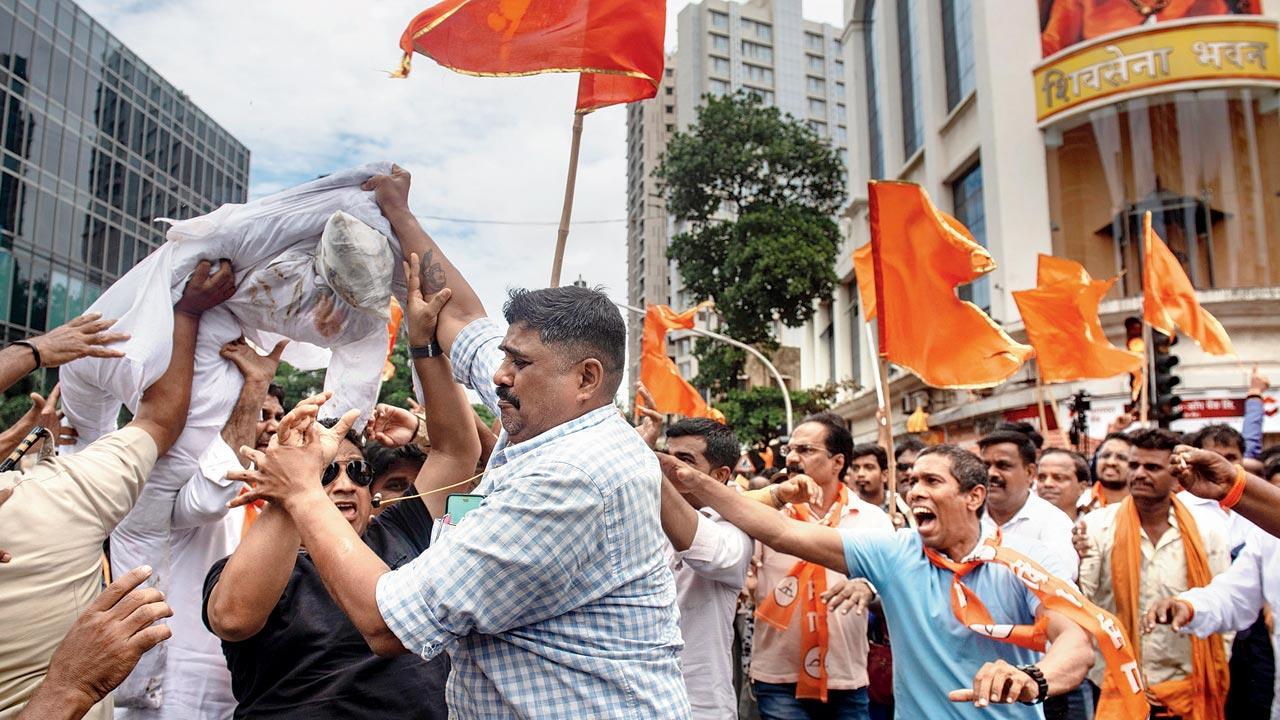 
After close to two weeks of nail-biting action, Maharashtra got a new government and chief minister on Thursday. While the frenzy around the Eknath Shinde-led rebellion against Uddhav Thackeray, the president of Shiv Sena, which overthrew the Maha Vikas Aghadi coalition that had ruled the state for 2.5 years, is on its way to fading out, what’s keeping political analysts busy is the question, what now of the party?

Shinde and the 51 MLAs who pledged their support to him came as a shock for the Sena, which last saw a revolt of this nature in 1991. Now Nationalist Congress Party MLA Chhagan Bhujbal, then a Sainik, wrote to the speaker, citing the support of 18 MLAs. Miffed at colleague Manohar Joshi hogging Uddhav’s father and Sena patriarch Bal Thackeray’s attention, he had threatened to split the party. Senior Thackeray promptly sacked him, and saw the 12 of the 18 MLAs return. In 2005, it was Narayan Rane—now with the BJP—who challenged Uddhav’s leadership when he was made the party’s executive president. And then, blood opposed blood when cousin Raj Thackeray rebelled after feeling sidelined. 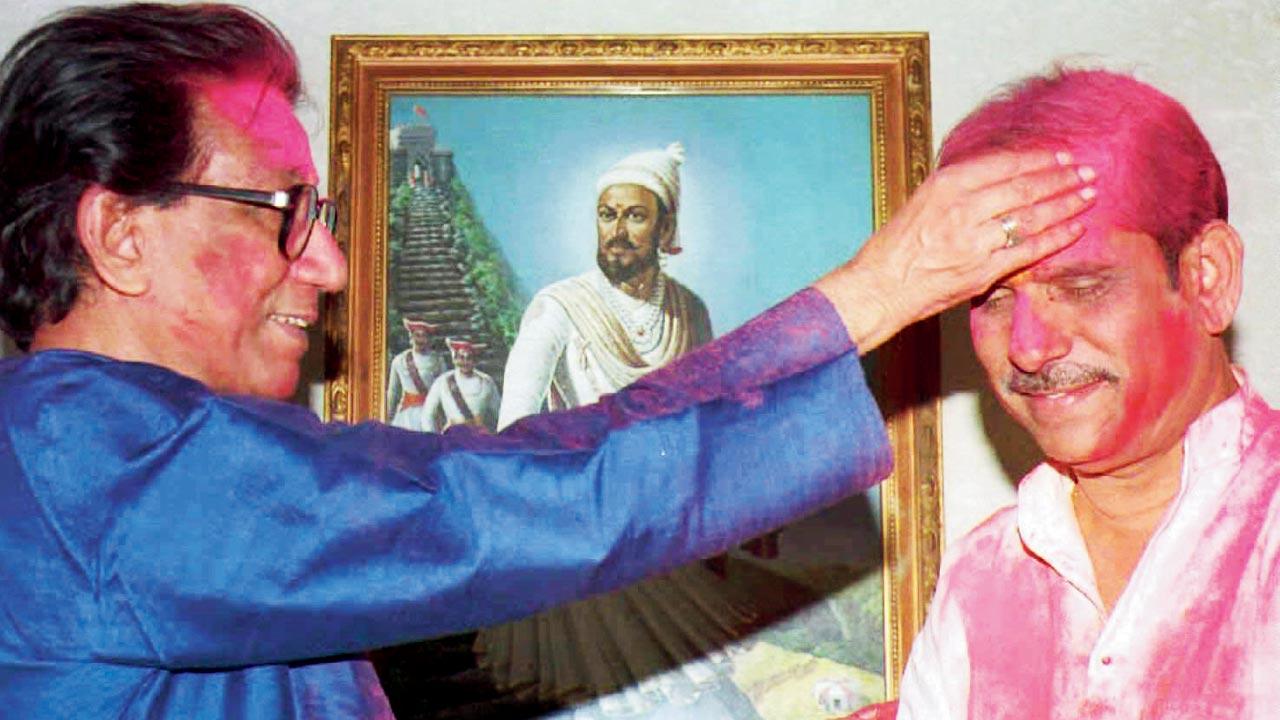 Bal Thackeray greets then Chief Minister Manohar Joshi on Holi at his residence in 1995. Joshi’s growing proximity to the supremo is said to have miffed Chhagan Bhujbal who had in 1991, threatened to split the party with the support of 18 MLAs

Santosh Pradhan, political editor of Loksatta, says, this is not surprising in a party with a pyramid structure. “There is space at the top for only one leader. Anyone who wants to grow has to push the pyramid higher, like Sanjay Raut, or challenge him. The big difference this time though, is that we don’t have a Bal Thackeray to galvanise the cadre.”

Uddhav may not have his father’s oratory skills and charisma but the manner in which he conducted himself during the run-up to the formation of the government in 2019; handled one of the worst-hit COVID states, and his public reaction to the latest show of opposition, indicates that he is a quick learner. “He has to now lead from the front, and make it easy for party workers and leaders to reach him,” thinks Pradhan. “He has already announced that he will sit at Sena Bhavan. Keeping his word will send out the right message.” 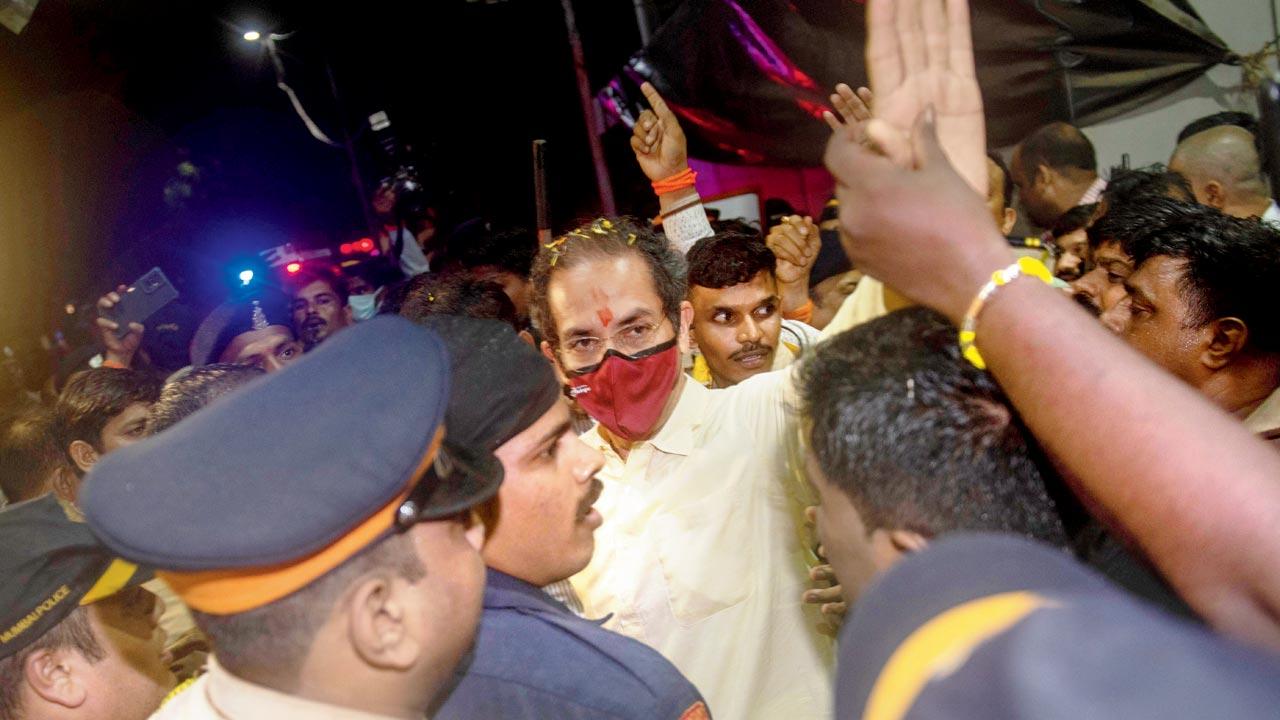 A supporter reaches out to Uddhav Thackeray as hundreds of Sainiks gather outside his personal residence Matoshree in Bandra. An emotional Thackeray had moved out of his official residence Varsha, on June 22. Senior journalist Vaibhav Purandhare says, “The perception that backstabbers have cheated Bal Thackeray’s party and his legatee will work to his [Uddhav] advantage”

Three factors will decide the fate of the party believes senior journalist Vaibhav Purandare, author of Bal Thackeray and the Rise of the Shiv Sena: Uddhav’s ability to keep his flock together; how the case for party symbol and ownership, and the disqualification of the rebel MLAs plays out in court,  and the party’s performance in the upcoming civic polls. “While it is an uphill task, it is not impossible if Uddhav Thackeray plays it well. The perception that backstabbers have cheated Bal Thackeray’s party and his legatee will work to his advantage.”

National Herald’s consulting editor Sujata Anandan, who has tracked Maharashtra politics and the Sena for close to three decades, feels that the BJP has muddied the waters for itself before the BMC elections. “The timing of the rebellion will make voters forget all that ails the city; they may vote emotionally for Bal Thackeray’s party.” 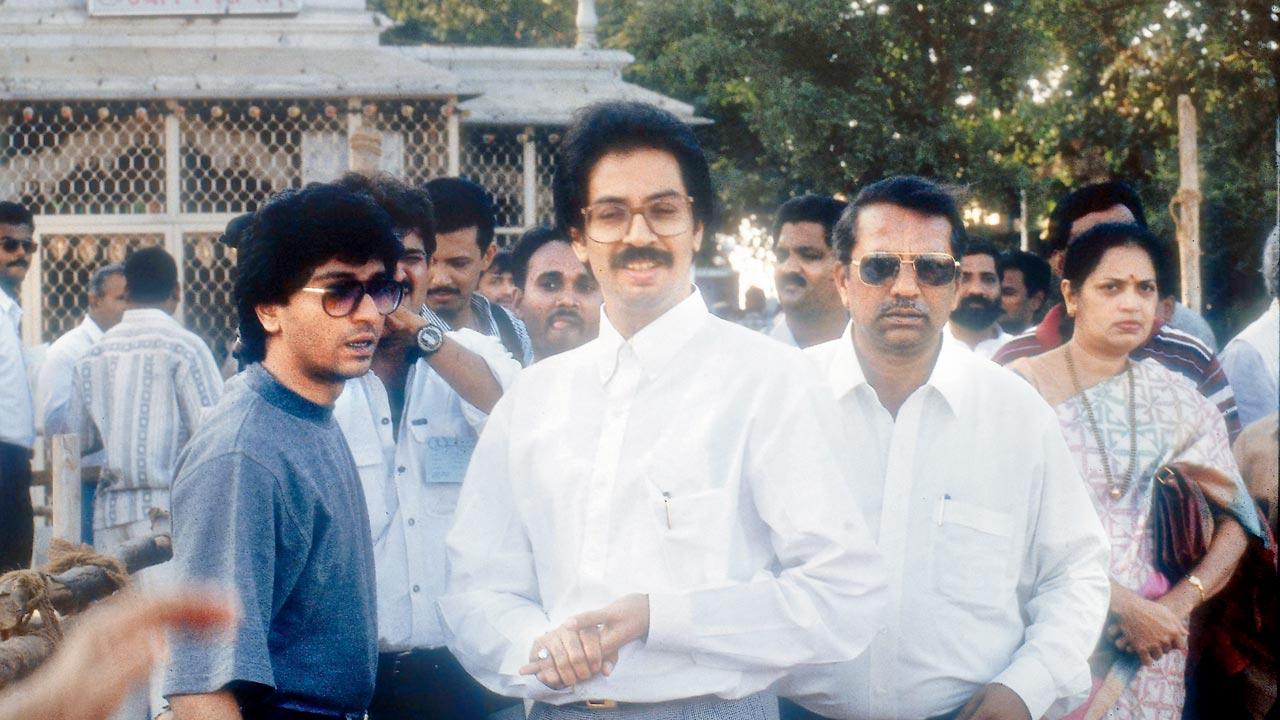 An archival photo of Uddhav Thackeray (right) with cousin Raj surrounded by party men. In December 2005, Raj had questioned Uddhav’s leadership,
and announced his resignation from the Sena, promising to launch a new political outfit soon

The repeated show of strength in the last week, by the foot soldiers at the shakhas, could have us believe that the party’s cadre is still enthused by the late supremo’s memory. But contrary to Anandan’s view, Pradhan thinks, buoyed by the BJP’s success at toppling Uddhav, Deputy Chief Minister Devendra Fadnavis, could dip into his astute understanding of government machinery to use every trick in his book to wrest the BMC.

The recent attacks on the offices of the rebel MLAs, including Shinde’s son, remind us that the Sena hasn’t forgotten its politics. “It’s in the party’s DNA,” says Anandan, “this can mean blackening faces, threats and vandalism, and destruction of public property.” Pradhan laughs at the memory of Sena senior and ex-Chief Minister Manohar Joshi’s remark: The average Sainik likes a stone in his hand and ‘b#@dwy@’ on his tongue.

Although Uddhav may have warmed up to a new voter base with his sobriety, Purandare agrees that the average Shiv Sainik never gave up his lumpenism. “While the top leadership is seen as sophisticated and genteel, scratch the surface and the Sena’s core strength remains its street style-raada. If they haven’t taken to the streets in the last two-and-a-half- years, it is because they were in power and had enough means of hitting back officially.” He cites the action taken against Arnab Goswami and Kangana Ranaut.

The rebels know this, says Pradhan. “They still have to go back to their constituencies. How Bal Thackeray loyalists in Mumbai and Thane will react to them is important to see. Mere money and muscle power won’t help. They may encounter voters at the grassroots who see them as traitors.”

One of Uddhav biographers believes that issues plaguing the Marathi manoos, made to feel like an outsider in his own city, which had led to the formation of the Sena in 1966, are still around. “If anything, there are more problems brimming. Channelising this anger and alienation will help the Sena.”

Perceptionally, he points out, the BJP is seen as a party of outsiders keen to undermine the Marathi identity. “The manner in which 106 people from the Samyukta Maharashtra Movement were killed in a firing under Morarji Desai’s watch when he was Bombay Presidency CM, still evokes strong emotions. Desai went on to become the BJP’s [nee Janata Party]’s first PM. The BJP is still seen as closest to his [Gujarati] community, whose members are believed to have cornered money, prime real estate and enforce vigilante vegetarianism,” he says, adding, “Eknath Shinde & Co. will have a hard time explaining why they are with the BJP. Once in power, the BJP will leave the rebels on their own to deal with this conundrum.”

Several faces from the Shinde camp have had a long political innings and will be well aware of the theory that whenever the BJP has tied up with a regional party, it has successfully hollowed it out. The list includes Janata Dal and VP Singh, the Telugu Desam Party (TDP), the People’s Democratic Party (PDP) in Kashmir, and Shiromani Akali Dal (SAD) in Punjab. “How long they [Shinde camp] hold their own and stay useful to the BJP will decide their future,” says the biographer.

This doesn’t mean that the road ahead is a clear one for Uddhav. “In its current pliant-to-the-Centre avatar, the Election Commission could freeze the Shiv Sena election symbol and/or name citing a dispute between the Uddhav Thackeray and Eknath Shinde factions,” says Purandare, referencing the EC’s disallowance of the usage of Lok Janshakti Party’s (LJP) name and symbol ahead of the Bihar bypolls owing to a dispute between the two factions led by MP Chirag Paswan and his uncle and Union Minister Pashupati Paras.

Anandan rules this out citing another precedent: “On November 12, 1969, when then prime minister Indira Gandhi was expelled from the Congress for violating party discipline, she set up a rival Congress (R) with a new symbol of a cow with a suckling calf. Despite the new symbol, Congress (R) won an overwhelming 352 out of 518 seats in the Lok Sabha in the 1971 general elections and did very well in five state assemblies which also went to polls.” She says that any such move by the BJP will further make voters sympathise with the Sena.

She also points out how unlike the Communist Party split in 1964 or the Congress split in 1969, which were both vertical splits, the BJP has only been able to break the Sena’s legislative party. “Rebels who left the Shiv Sena have been largely left to lick their electoral wounds in the past,” she says. She speaks of Bhujbal losing the Mazagaon seat soon after quitting the party; Raj Thackeray repeatedly faring poorly in the ballot battle and how Narayan Rane now finds it impossible to win an election.

When what Anandan calls the one-MLA-strong “militia of lumpens midwifed by the Congress to neutralise the Socialists” feared being banned during the Emergency, it quickly rustled up a party constitution with Bal Thackeray at its vortex. “It created a 180-member state and 19-member national panel [with 14 elected and five nominated members] with the supremo vesting absolute powers,” she says, adding, “Eknath Shinde was unable to win that election within his party and it was Uddhav Thackeray’s nomination that found him a place on the national panel.” She points out how the cadre-based party largely goes with whoever its leader picks as candidate. “Even if a lamp post is given the ticket by the party chief, the cadre will put its weight behind it.”

It is on the Sena’s Hindutva, that the BJP has often been left guessing. “Long before their aggressive endorsement of hardcore Hindutva, BJP leaders like Uma Bharati and LK Advani were fighting shy of the onus for the demolition of the Babri mosque in 1992, and Bal Thackeray had claimed credit,” Anandan remembers. “Thackeray subscribed to opportunistic Hindutva. When Muslims voted for his party [to protest Congress’ inability to protect them during the 1992-93 riots], the Manohar Joshi government had given mosques additional FSI.”

Though Uddhav was made CM with the help of secular parties, he has consistently made announcements that appeal to the Marathi-speaking Hindu liberal voter, she points out. “These voters don’t want anti-minority violence and the brandishing of trishuls, but they also don’t want ‘minority appeasement’. They form a sizeably large voter-base and see Uddhav as endorsing their brand of Hindutva.”

1966
Year in which the Shiv Sena, a Marathi regionalist and Hindu ultra nationalist party was founded by cartoonist Bal Thackeray, standing up for the Marathi people over migrants who made cosmopolitan Mumbai their home. Broadening its focus from Marathi ideology to a pan-India nationalist identity, it first aligned with the BJP in 1989