What all can you do in the name of Hindutva? Anand Patwardhan's new documentary, Reason, spells out the horrors of reverence gone wrong 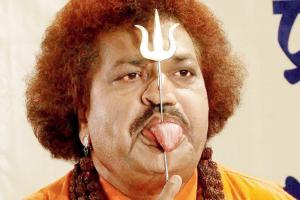 A still from the film, Reason (Vivek). Pic/Anand Patwardhan


It was in our late teens, as a media student that we were introduced to Anand Patwardhan, the filmmaker. Inside a dimly-lit classroom, the projector flashed his critically-acclaimed 1992 documentary, In the Name of God (Ram Ke Naam), for a distracted bunch of young girls.

Ten minutes into the film, it felt like the air had been sucked out of the room. This silence stifled, when the demolition of Babri Masjid played out on the screen. A similar feeling engulfed us, as we watched Patwardhan's searing, new documentary, Reason (Vivek), uploaded on YouTube earlier this month. Reason, which won the best feature-length film at the International Documentary Film Festival Amsterdam (IDFA) last year, has become accessible to the public at a time when we most need to see it.

Opening with the murders of rationalists Narendra Dhabolkar and Govind Pansare, the film veers to discuss the "role" of the foot-soldiers of the Hindu outfit Sanatan Sanstha in these crimes, before taking us into the troubled heartland of Dadri, Uttar Pradesh, where cow vigilantes have spread a blanket of terror and hate. It also gives us a ground report of the Dalit and student unrest in the country. While originally divided into eight chapters and running over four hours, the videos accessible online, have been split into 16 episodes, each around 12 to 13 minutes long.

To say that the film is an open criticism of Narendra Modi's government, would mean seeing it without a prism. Because, right-wing Hindutva doesn't owe its existence to the ruling party. If anything, Patwardhan wants to show how it has acquired it's true-blue form in the advent of the prism - in this case, the BJP, which has been on the iron throne for the last five years. "When I went to Ayodhya in 1990 following the Rath Yatra for my film, I thought that the government of the day [National Front] was going to stand firm on secular values and not allow any harm to the mosque.

But the karsevaks entered, and the mosque was attacked. That moment was frightening, because CM Mulayam [Singh Yadav] had assured protection. In 1992 the mosque was demolished and the whole Hindu-Muslim fabric of the nation was ripped apart by riots and bomb blasts. Since then the demonisation of Muslims has continued to the present. All this also propelled the Hindu extreme right into the centre of politics," says Patwardhan. "Today, the RSS which had gone underground after Mahatma Gandhi's murder in 1948, has funds coming from everywhere. It is the fastest-growing NGO in the world, and because the BJP is in power, it enjoys incredible impunity, which extends to every fringe right-wing group, like Sanatan Sanstha and the gau rakshaks." He points out that in the last five years, every single murder and blast-accused owing allegiance to Hindutva is walking free. "One of them, Pragya Singh Thakur, an accused in the Malegaon blasts, is not only out on bail, but has been given a BJP election ticket. There seems to be no limit to what they can do, and what the public will swallow."

Patwardhan's disappointment with the polity is evident in every video, and the filmmaker doesn't mince a 'frame' to present the facts as he sees it. Activists Jignesh Mevani, Kanhaiya Kumar, the late Rohith Vemula, and the assassinated rationalists are the real heroes of his film. But, sometimes, exercising no restrain means becoming easy meat. There is a point in the film, where a Sanatan Sanstha spokesperson tells the media that the police should have "broken the bones" of Patwardhan, who led a rally at the Asiatic Library after the assassination of MM Kalburgi. Unbeknownst to him, Patwardhan was at the same press conference, recording his claims.

"You can conduct your trial right now," Patwardhan tells him. "I started work on the film after Pansare was murdered [in February 20, 2015]. Earlier when Dabholkar was shot dead, I didn't realise that the killing was the beginning of a series of assasinations. Soon the murders of Kalburgi and Gauri Lankesh followed."

The film took its organic course, as beef killings, the JNU protests, and the Dalit andolan, again put the spotlight on the threat to democracy. "Today, it's the poorest of the poor who are most affected. The whole small and middle scale agriculture industry has been destroyed, the banking system is a disaster due to bad loans, and the working class has lost jobs on a huge scale, thanks to demonetisation and other economic policies. The whole economy has been hollowed out," he says, adding, "But, for me, the biggest tragedy is the hatred that has been widely spread. India is now unrecognisable from what it was during the Independence struggle. The India of Mahatma Gandhi has been smothered, and what we have is the India of Amit Shah and Modi."

Next Story : Mehr Jesia on being a wedding planner and rediscovering herself