At a soon-to-be-held 3D printing exhibition, band CombustUs will play only printed instruments 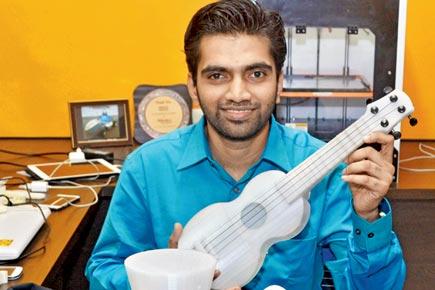 “The first instrument we 3D printed was a flute. It had a few flaws, so we tweaked it a bit and then re-printed it. It’s that easy when all you have to do is make changes to a digital design,” says Swapnil Sansare of Divide by Zero Technologies, a 3D printer manufacturing firm in Navi Mumbai. “We then moved on to a ukulele, and an egg shaker, and now are working on an electric guitar.” 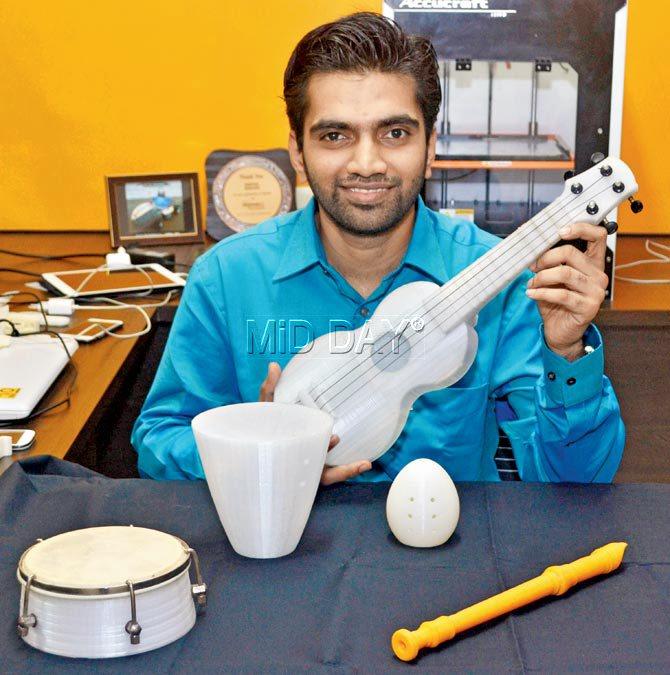 Swapnil Sansare and his team at Divide by Zero have 3D printed a flute, ukulele, Djembe, a kanjeera and a Chinese wind instrument called Xun. Pic/ Swarali Purohit

For those living under a rock, Sansare is talking about a technique called 3D printing, where one can print digital files in physical forms — in plastic. These printers are usually used in the automobile sector, where prototypes are printed for testing — for example, a dashboard prototype is first printed on a 3D printer and then refined to be manufactured.

But Sansare and his team, which is taking part in the Inside 3D Printing Mumbai Conference & Expo in December, decided to take it many steps further. Along with the help of his friend Pareshh Vijay (drummer), who along with Manroop Manjunath (vocalist) and Dr Hemant Dhamne (flautist), forms the band CombustUs, Sansare will showcase a band that will play 3D-printed instruments exclusively.

“These 3D printers are not new. They have been around for almost 15 years, but to make them more relevant, something like this may work,” says Sansare. Since Vijay, who used to work with Furtados as a guitar technician, knew the intricacies of how an instrument should be tuned and how it should sound, they tried and tested with a few prototypes before deciding on what to go with. “We printed a Djembe (a West African drum), a kanjeera and even a Chinese wind instrument called Xun,” says Sansare.

Vijay, a freelance video editor, has been in the band for six years. The band’s sound is experimental, and in their original compositions, one will find a mix of metal, rock and folk. “It’s an acoustic vibe with a psychedelic feel,” explains Vijay. It’s no wonder than that the band is looking forward to playing all 3D-printed instruments at their performance at the expo, where they will throw in a few covers too so that the audience can sing along. But does the fact that these instruments are made of plastic and not the real thing — wood — interfere with sound quality? A YouTube video, uploaded by the firm where Vijay plays the ukulele, suggests that for the amateur listener, it may all sound the same. “The sound is never going to be one that you get with wood. But that doesn’t mean it sounds bad. It has its own flavour, and that goes well with our experimental style. But, the good thing is this — with real instruments, there are a lot of maintenance problems, and finding new parts for damaged ones is expensive. But, with a 3D instrument, you can just print a part for much lesser,” says Vijay, adding that an affordable 3D printer costs around R90,000.

Sansare doesn’t plan to leave it at musical instruments though. His next project is with a fashion designer and he plans to make a 3D dress. “It’s in the planning stages, but I think it will be great. In the future though, everything will be printable. Won’t that be terrific?”

Next Story : Get cloned