Rizwan Amlani on equation with brother Riyaaz and experiments with coffee

Rizwan Amlani, co-founder of Roasted Today that has launched Dope Coffee kiosks across city, talks about his equation with brother Riyaaz, sourcing and pouring farm to cup coffee and the power of collaboration 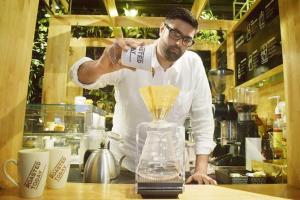 
In a maroon Nehru jacket worn over a white linen shirt and beige pants, Rizwan Amlani, 32, looks a lot like his brother, Riyaaz. He removes it and gets into the front seat at Dope Coffee kiosk at Flea Bazaar Cafe, as he dons his hat of Dr Rizwizzle Amlanizzle, a nickname for his coffee experiments, and meticulously "brews" us a Monsoon Malabar AAA coffee, which he weighs on a weighing scale, empties it into a filter paper fitted in a conical pour over and gently adds hot water that drips the coffee mixture into a kettle. "These beans have been exposed to the monsoon air to attain a bolder character," he adds, offering us a cuppa.

A trained chef from French Culinary Institute in New York city and then Culinary Institute of America, he has worked at 11 Madison Park and been part of the opening team at Daniel Ballou's Gastric Bar in Bowry District in Manhattan.

Since 2016, he has been working on Roasted Today. To date they have a 500 gm coffee micro roastery cafe inside Versova Social and are looking to open another larger roaster inside Todi Mill Social. Besides these two they also have two more shop-in-shop outlets called Dope Coffee that serve freshly brewed crop-to-cup coffee sourced from Indian and international plantations.

Early days
His "training" in hospitality began at his father's Churchgate restaurant Berry's as a child. "I spent weekends at the restaurant. We had live orchestra, and a lot of good singers have performed there like Kumar Sanu and even Jagjit Singh. It's not too different from what antiSOCIAL is today," Rizwan recalls.

At the age of six, he landed up at the restaurant dressed in the service staff uniform of black pant, white shirt, insisting on taking orders. "As a little kid, I thought owning or working a restaurant was all anyone could ever be," he quips. With an age gap of 12 years, Riyaaz was "second dad" and the naughtier, outgoing sibling. "I was always pampered by him, only until I wore his clothes!" says Rizwan, who studied at St Mary's School and then pursued commerce at HR College.

By 2002, Mocha, which opened in a 400 square foot area outside Berry's, had already broken every single norm there in market at that time and he volunteered after college hours. "I would man the cash counter. We were all very charged. I remember it was exciting being a part of this bigger movement. This was my first introduction to coffee," says Rizwan.

Early on Rizwan, an avid state-level table tennis player, realised conventional education was not for him. "From dad, I learnt what not to do. From my mom I learnt the power of prioritising and to ensure staff salaries are always paid before their sweat dries. From Riyaaz I learn the importance of keeping your investors happy and how to smile through a crisis," says Rizwan who started Del Italia in 2007. It was the first to serve wood-fire oven pizza outside of five stars. He ran it for two years, and felt the urge to learn the skillset of a chef and packed off to New York. When his father fell ill, 26-year-old Rizwan packed his bags and returned home to be with the family.

"Our father-sons relationship is like a triangle, we are all alphas but we are all very connected to each other. My father missed me and asked me to stay back," he says, which led him to head The Tasting Room as chef. "My heart wasn't in cooking, but I saw sense in food innovations. Something that got designed on the plate would get designed on my canvas first; the way French chefs worked," says Rizwan.

Coffee addict
In December 2016, Rizwan met his co-partner, Nitu Pohoomul, who has been in the decaf business for the past 15 years, at Salt Water Café with Riyaaz. "I explored and found the consistency that I was looking for, delving into the chemistry of coffee — tracing the source, introducing the farmer to their end customers, and creating a personal experience for the consumer. Coffee is a personal experience, and third wave roasting takes it to the next level because you can actually choose a preferred granule size, and a type of roast," Amlani adds. Within a year, his company evaluation is Rs 25 crores, and is ready to introduce its first standalone by November.

They feature eight domestic, four international and one decaf coffee on their menu – from south province of Ethiopia, Kenyan Mountains to plantations closer home such as Gungegiri Estate in Chikmaglur and Swarnagiri Estate in Coorg. "Dope Coffee does three major verticals, B2B, cafe model and shop-in-shop. The world is slowly moving towards collaborations. We are just future ready," he explains. But we are still curious about the name, and he quips, "Dope, cause it's the good stuff."

Ande ka funda
His first interview, for Daniel Boulud, an award-winning French chef, went awry. Asked to make an omelette, he failed. "I went back and cried. The French take their eggs seriously. I had not used enough butter, my pan was at the wrong temperature. I had used black pepper instead of white and missed the hint of cayenne peppers. Never made using tools, you have to make a scramble, and flip it and roll it without a spatula," he says. He reapplied and got through.

Next Story : A gift-wrapped tale