The spectacular idea of Har Ghar Tiranga could have been a critical shot in the arm for the khadi industry and thousands of handloom weavers and spinners, if we had endorsed and contracted hand-spun flags instead of synthetic rip offs 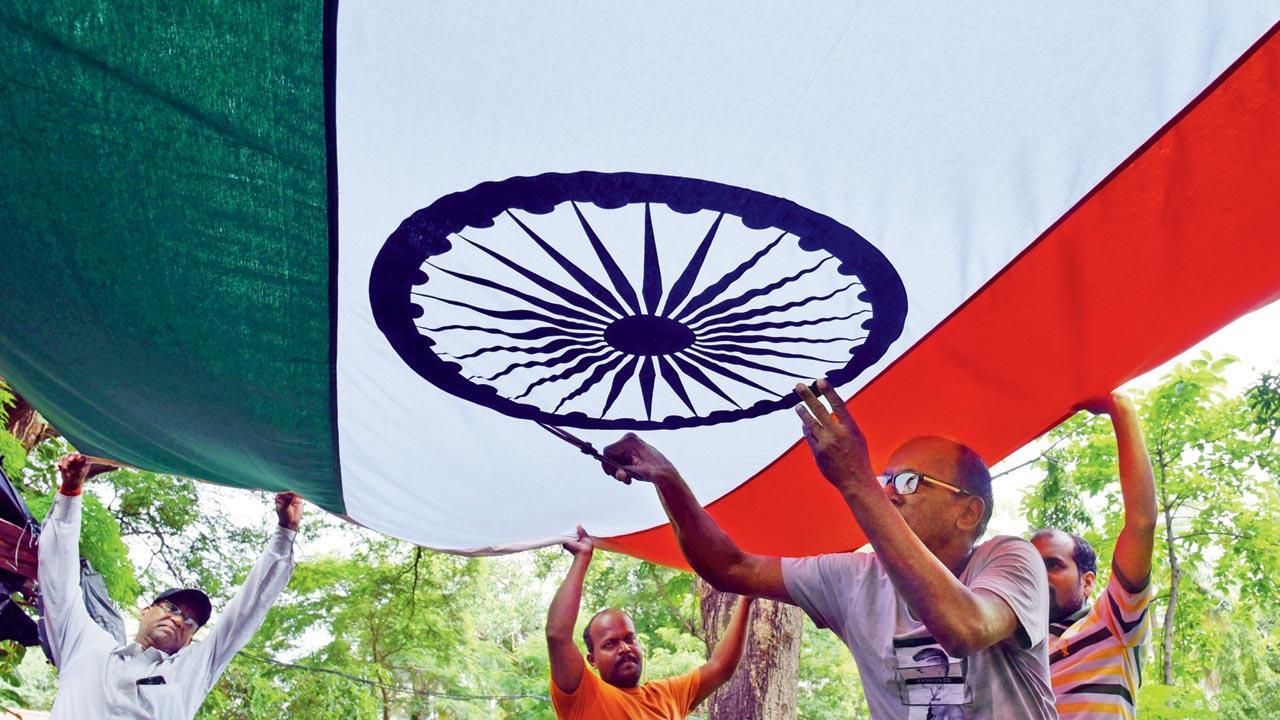 
It was 1943. Mahatma Gandhi was still under house arrest by the British in Pune’s Aga Khan Palace along with other freedom fighters of the Quit India Movement. But his directions about the Indian flag to be hoisted on Independence Day that was celebrated by the Congress back then on January 26, were crystal clear. “It does not matter how small it was, as long as it was of khadi and correct in colour,” Gandhi said. The incident was recorded by Mira Behn (British supporter of the Indian independence Movement who left her home in England to live and work with Gandhi) , who was one of those under house arrest, in her letter to author Kshitis Roy later in 1964.

But this Independence Day, with the central government’s Har Ghar Tiranga campaign, which it announced as part of celebrations to mark the 75th year of Indian Independence, it will not matter if you hoist a khadi-made Tricolour or a polyester one stitched on a machine, as long as the colours that make the Indian national flag are apparent and the Ashoka Chakra is in order. 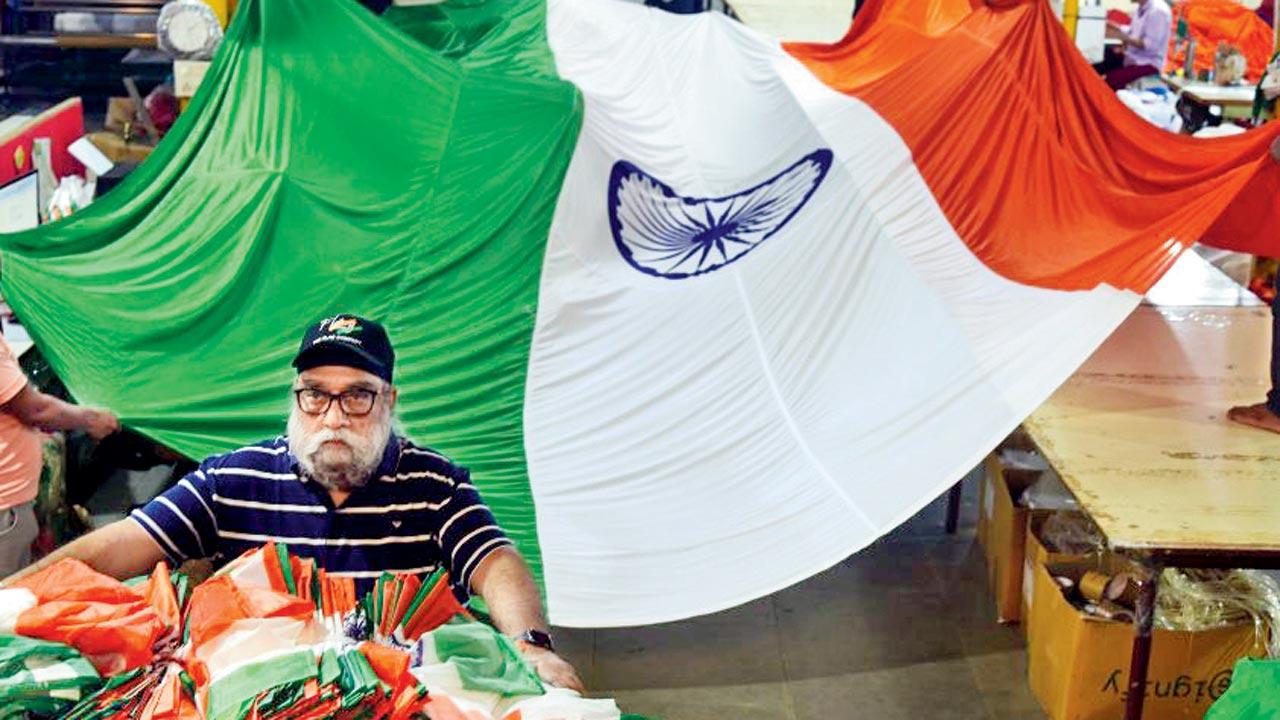 Flag Company in Naigaon has taken on bulk orders of machine-made polyester flags of India for the Har Ghar Tiranga campaign as part of the Azadi Ka Amrit Mahotsav. Managing director of the company, Amarjit Singh Negi, seen here with the finished products ready for dispatch. Pic/Atul Kamble

As per an order dated December 30, 2021, the Government of India amended the Flag Code of India, 2002 (see box). Now, flags made of polyester, silk or machine-made flags can be hoisted, along with those spun by hand and made of cotton khadi.

Critics have called out the government’s scheme for disrespecting khadi and wasting what may have been a golden chance to bolster the fortunes of India’s khadi gramodyog industry. 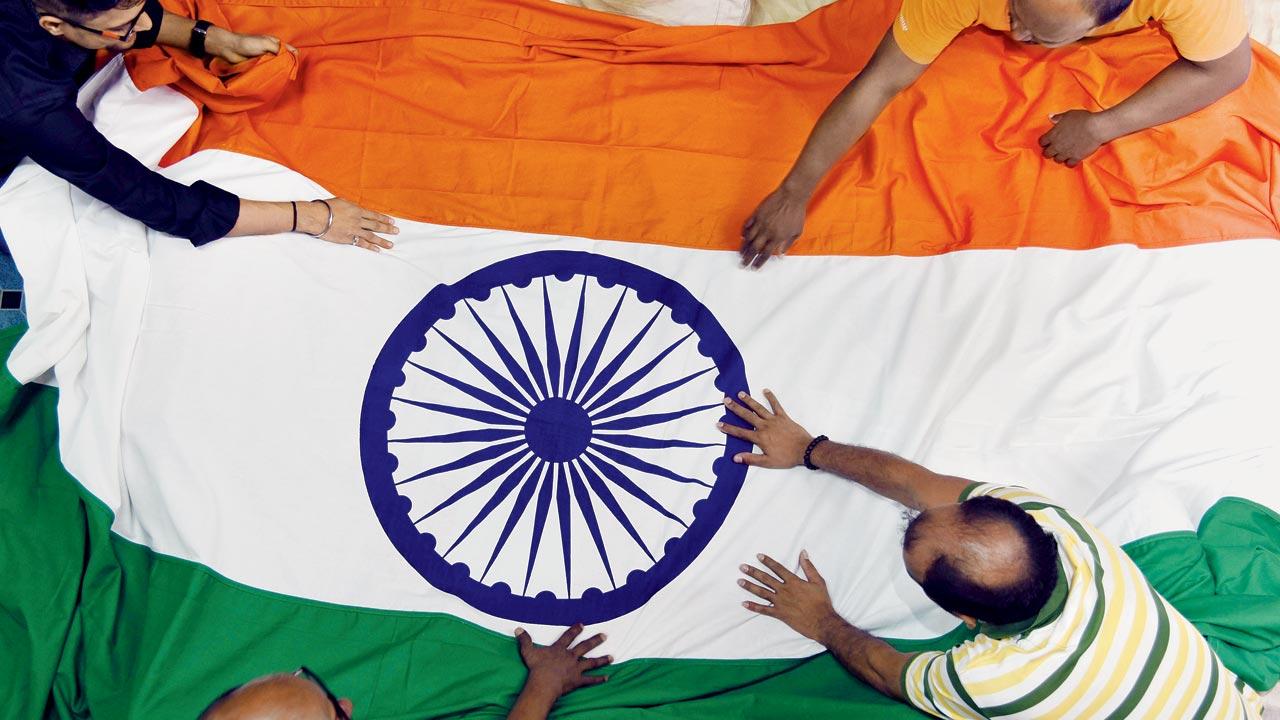 Final touches being given to a khadi flag at Khadi Bhavan at Kora Kendra,  Borivli West. Pic/Nimesh Dave

KV Pattar is the secretary of Karnataka Khadi Gramodyog Samyukta Sangh (KKGSS). He asks, “Why should we disrespect the national flag by manufacturing it by machine and selling it for a mere R20?” A 2 x 3 feet BIS standard khadi flag could cost about Rs 200.

Located in Bengeri of Hubli in Karnataka, the KKGSS which was set up on November 1, 1957, has the unmatched honour of being the only centre in India to produce the national flag. All khadi-made flags fluttering in the sky not just in India, but across the world, are produced at this 64-year-old centre, KKGSS claims. The Khadi and Village Industries Commission accorded KKGSS the permission to produce the BIS-standard Tricolour and supply it to the entire nation. 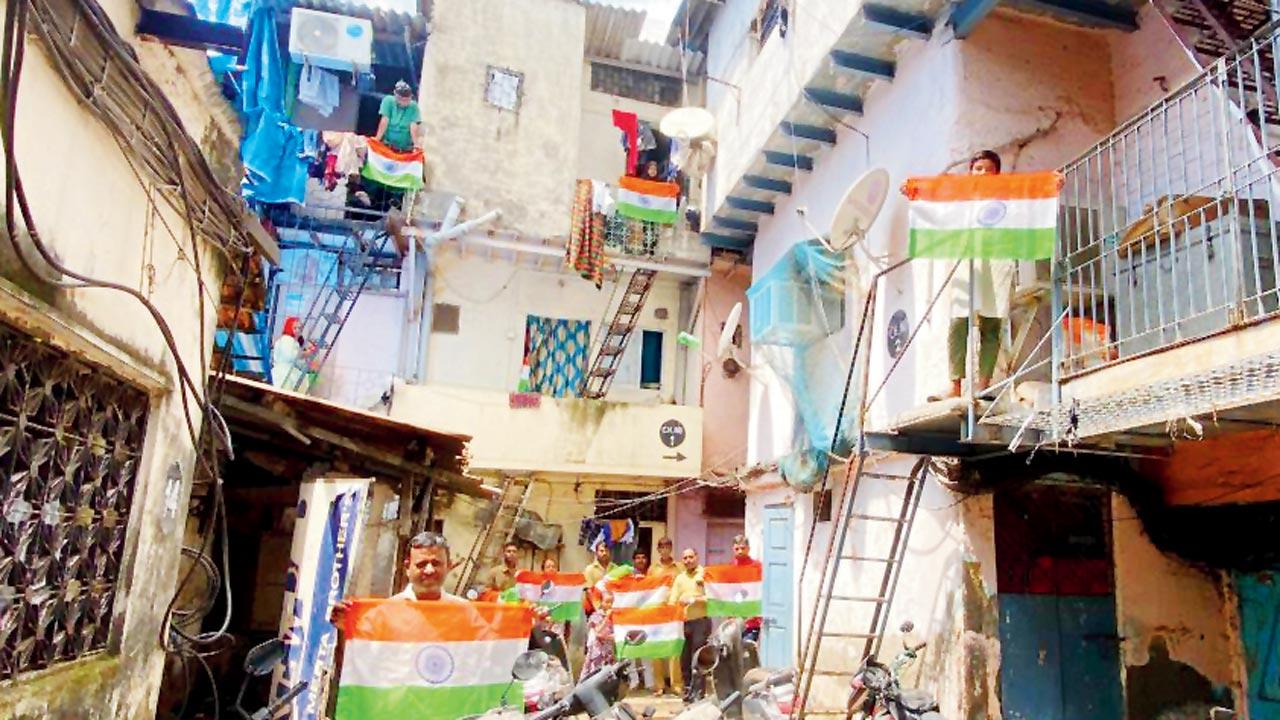 “From the very beginning [of the freedom movement], the Indian flag has been made of khadi. It was the khadi flag KSKGSS made that was hoisted in the Parliament and in the President’s House. Khadi commanded respect and the country deserves nothing less than hand-spun, quality marked khadi flags.”

At KKGSS, the flags produced are of premium quality and made in accordance with the standards set by the Bureau of Indian Standards (BIS). These include maintaining proportions of the three colours—saffron, white and green—the blue spokes of the Ashoka Chakra to be mirrored exactly on both sides of the flag like two palms joined together, and hues of the colours to be standardised, among others. 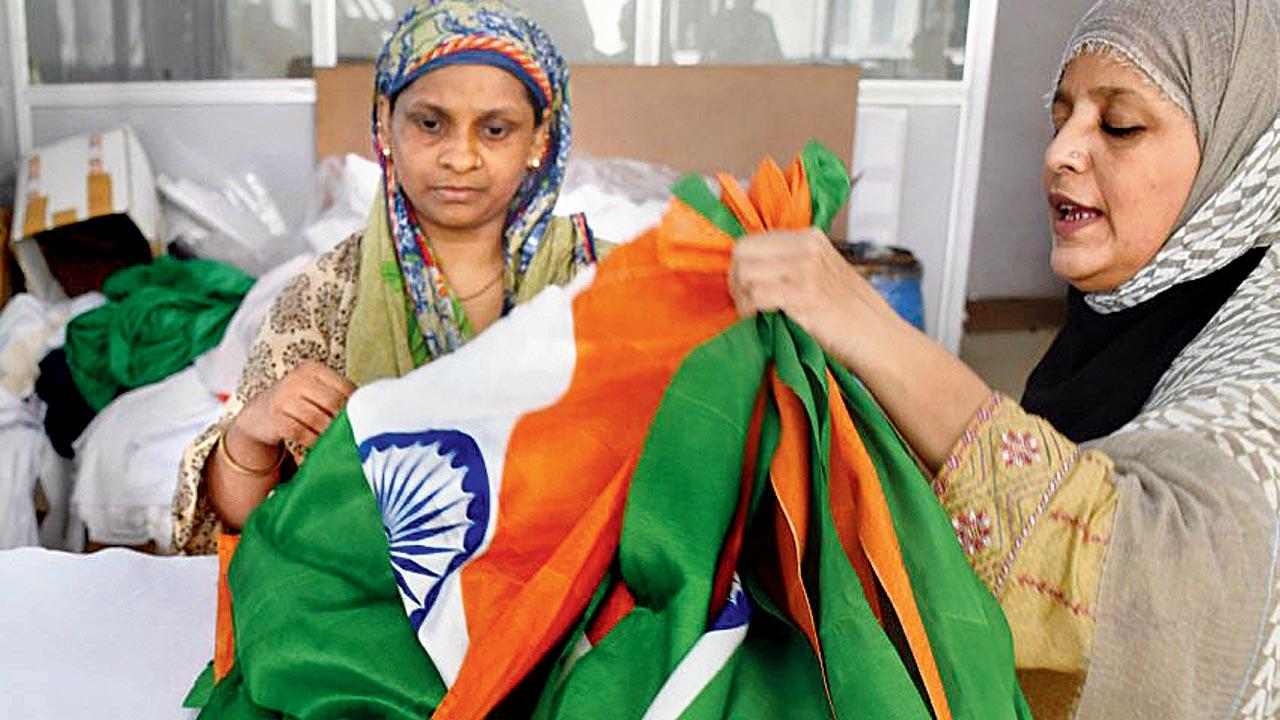 Polyester-made Indian flags being bought by city residents ahead of the 75th Indian Independence Day as part of the Har Ghar Tiranga campaign launched by the central government. Pic/Ashish Raje

A report in this newspaper dated August 10 highlighted how residents had complained that some flags distributed by the BMC for free depicted the Ashoka Chakra off-centre.

“As per BIS and the Flag Code of India, 2002, the flag should be made of hand-spun and hand-woven cotton khadi bunting. This however, is not an easy task. A single defect in the flag, whether in size, thread count, strength of yarn, fastness of the colour used for dyeing, is considered a serious offence, liable for a fine or imprisonment or both. We took it up as a challenge,” Pattar adds. 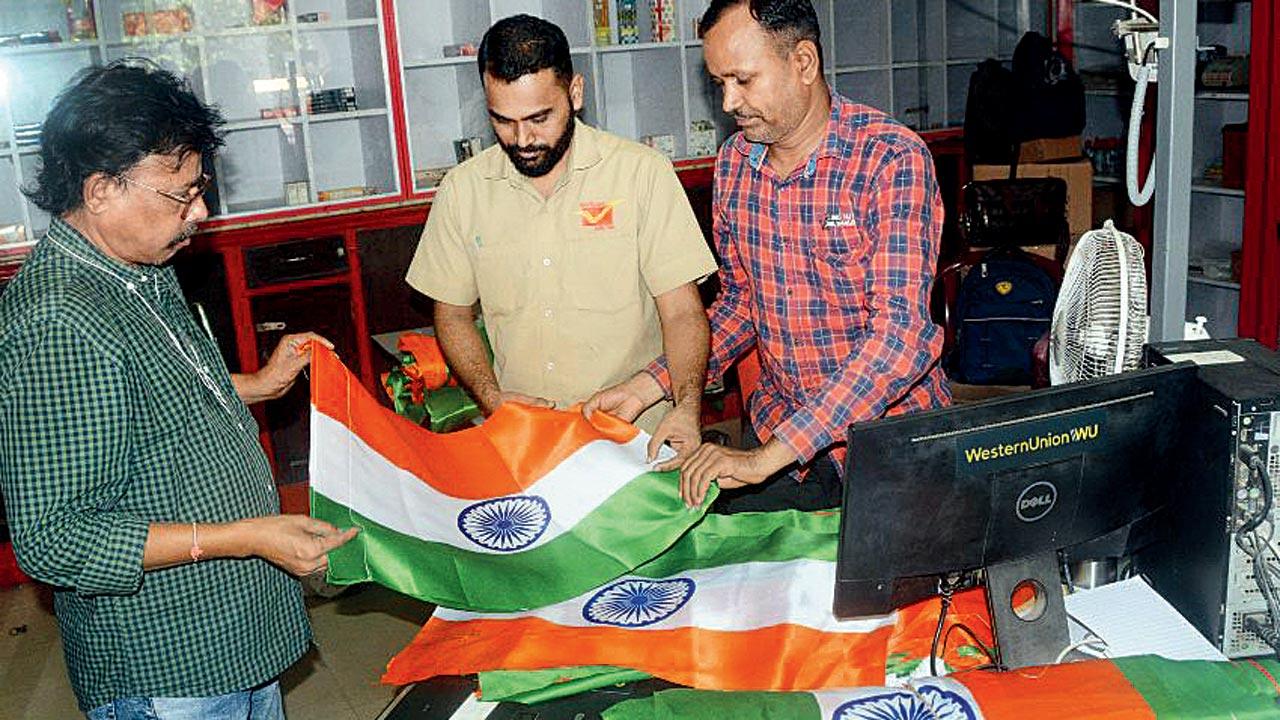 Polyester flags being sold at the General Post Office at CSMT. The central postal department claims on its official website to have sold over 2.2 lakh number of synthetic flags this Independence Day at R25 a piece. Pic/Sayyed Sameer Abedi

The prohibitive cost of spinning and weaving khadi is being presented as argument that the government’s intention was to make the celebration democratic and feasible even for the poor. The government argues that the Tiranga campaign is attempting to personalise the national flag for all Indian citizens, bringing it home irrespective of their social or economic status. “The idea behind the initiative is to invoke the feeling of patriotism in the hearts of the people and to promote awareness about the Indian National Flag,” it has said.

And so, local civic bodies, like the Brihanmumbai Municipal Corporation in Mumbai, have been distributing machine-made polyester flags to citizens for free, urging them to hoist these between August 13 and August 15. 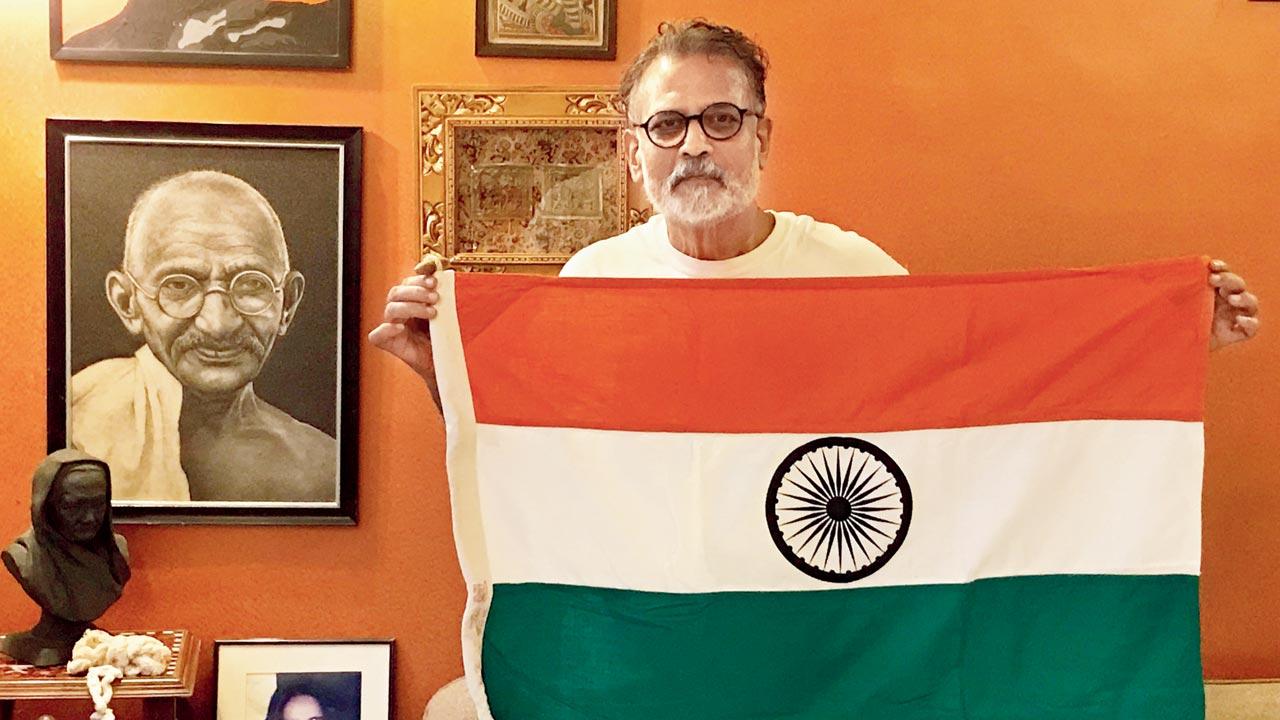 Busy folding and dispatching the polyester flags at his Naigaon-based manufacturing unit, managing director of Flag Company, Amarjit Singh Negi feels proud of delivering the “best and most durable product.”

In the world, he says, 100 per cent spun polyester flags are used.

“All over the world, including on ships, 100 per cent spun polyester flags are manufactured, bought and sold. It is the best and most durable material to withstand time and weather. The government has made the right decision of allowing the material to be used for our Indian national flag and I completely support it,” he tells mid-day in between a busy day of last minute churning out of orders. “With this amendment, we are only moving towards the best,” he puts it.

The giant-sized show of nationalism however, could be hurting some. Two days ago, a video of a fair-price shop in Dadupur village of Haryana, showed people being forced to buy the flag for Rs 20 if they wanted free ration under the Public Distribution System. The shop owner’s license was suspended and a Union Ministry of Culture official clarified that buying a flag was “purely voluntary”.

India celebrated National Handloom Day on August 7, an occasion earmarked by PM Narendra Modi in 2015 to commemorate the 1905 Swadeshi Andolan.

The irony isn’t lost on Pattar.

“If they wanted to give out the Tiranga en masse, they should have placed an order with us last year itself. That 2022 was going to be the 75th year of Independence, was not a fact that emerged out of the blue. We could have produced the best BIS-standard flags for the country if told so in time. Polyester flags being sold for as low as Rs 20 is nothing but being disrespectful to the whole ideology,” he says.

This, believe those who are critical of the government’s initiative, will be a further blow to India’s khadi industry already reeling under losses due to the pandemic. A large order from the government could have helped thousands with their job, they say.

Textile designer, saree advocate and handloom revivalist Rta Kapur Chisti calls khadi a staple, offering the widest base of employment there could be in the country. “We can only justify taking that base away by enhancing both the skill and earning of an artisan in whatever other vocation he goes to. The change should be an upgrade.”

The move has also received criticism by the Opposition parties with the Congress calling out the BJP for not “understanding” the ethos of the freedom struggle. At a press conference addressed earlier in July, Congress spokesperson Ajoy Kumar said that the shift from khadi will only facilitate mass import of polyester Indian flags from China at a time when the neighbouring country is transgressing unabashedly into Indian territory.

Supporting the Centre’s move is BJP MLA from Ghatkopar Ram Kadam. He tells mid-day, “The Opposition should understand the concept [behind the campaign] and not oppose patriotism for their political vendetta. It is a noble initiative that all Indians should support. By displaying the Tiranga in our homes, we will uphold the love for our nation, for our flag, and for our martyrs. We are not promoting China. If Indians do not hoist our flag, will the Pakistanis or Chinese do it?”

This argument is going to be tough for Tushar A Gandhi to stomach. Mahatma Gandhi’s great grandson explains that India’s freedom struggle was deeply entwined with the propagation of khadi and Bapu was determined to promote village and khadi industries on the world stage.

“Why do we respect the flag?” Gandhi asks rhetorically. “It is after all, just a patterned piece of cloth. Why do we treat it with utmost reverence and are emotional about it? Ultimately, it is all about the sentiment attached to the freedom movement of which hand-spun khadi was an integral part. Bapu was keen on the village-industry model based on the principles of spinning khadi. Khadi was not just a sentiment, but a school of economics, which gave livelihood to thousands. The pre-Independence flag also had the charkha [spinning wheel] which symbolised the cottage scale industries. When the flag was altered [to include the Ashok Chakra], the fabric was retained as khadi since it is symbolic of the freedom movement,” he shares.

Recalling an instance from the Mahatma’s life, Gandhi says that it was because of his love for khadi that all machine-made gifts handed to his youngest son, Devdas, on his wedding day, were returned and only khadi products were accepted. “Khadi was at the helm of every juncture of the freedom struggle, whether it was during the Swadeshi movement or when the Congress began to celebrate Independence Day on January 26, 1930, by hoisting the khadi national flag until the occasion was moved to August 15. The khadi flag is a gesture of defiance against the British and foreign-made material. It has now been trivialised.” Gandhi shares an anecdote about the quality of machine-made flags dotting Mumbai’s homes. “My neighbour hoisted a polyester flag and in just about a day, I see that the colour is fading and the cloth is threadbare.”

Where to buy a khadi flag in Mumbai

What’s the flag code of india?

The Flag Code of India came into existence in 2002 and was amended vide an order dated December 30, 2021. As per the amendment, national flags made of polyester and machine-made flags were allowed to be hoisted. Through another amendment dated July 19, 2022, the flag displayed in open or on a house can now be flown day and night. Earlier, it could only be done from sunrise to sunset. The flag can be of any size, as long as it is rectangular in shape, is not disheveled and the ratio of the length to the height (width) is 3:2.

Next Story : The Jindals did it first