The big book influencer. Or not?

A free copy of a book, followed by collaborations (some paid), reviews and give-aways - social media's bookish tribe is growing and publishers are making hay while it shines. But is it all worth it? 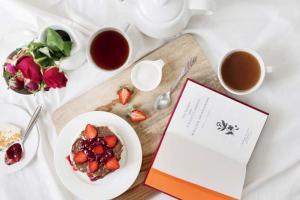 "There was no buzz or advance praise, no book launch either. It was over a month before the first review appeared in print. But the book found its early champions, many of them here on Instagram, and people began talking about it, and more and more readers took notice. It astounds me that thousands of readers picked up a hardcover written by an unknown author, even though it came with no endorsements or blurbs. And many thousands more read the ebook. That's amazing, isn't it? Thank you to everyone who made it possible."

Mahale, whose book found mention in the longlists of JCB Prize for Literature and the First Book Award at Tata Literature Live!, and was last week shortlisted for the Crossword Book Award, had openly acknowledged what authors, otherwise shy away from mentioning: How social media's big influencers are now becoming crucial to driving up book sales.

A recent Twitter thread on the best book covers from India in 2019 by Mumbai-based bookstagrammer and writer Resh Susan (@thebooksatchel), was retweeted over 80 times. A day later, Twitter user Kinnari @KinnariKudla tweeted how Susan was "truly the only bookstagrammer whose recommendations I've taken".

Susan, who has over 68,000 followers on Instagram, is presently the most recognisable Indian influencer in the publishing space. Publishers rely on her, authors swear by her, and readers, especially those on social media, consider hers the last word. "We managed to generate a lot of press publicity for a debut novel recently. There were great reviews in leading news magazines, and a lot of sites did interviews too. But, the kind of conversation that Resh helped generate for this particular novel, right from its cover to content, was incomparable," says a Delhi-based books publicist, on condition of anonymity.

Susan started bookstgramming in December 2015. "I was in a stressful period and badly needed a distraction to take my mind off things. I wanted to learn something new as well. That's when the idea of a book blog came to me. It was most time effective and I was already reading books anyway. I wanted to make it more personal and thought clicking pictures of books was a good idea instead of a stock image. That's how I found Instagram," she says.

Her gorgeous compositions of books—she usually plays with white, green and pastels with a mug of black coffee being a staple—has earned her quite a number of fans on the photo-sharing network. But, it's her recommendations that are most sought after. She read a mix of novels—literary, dystopian and fantasy, in particular. "I am also interested in translated books, especially Asian languages and Spanish and short stories, and picky with YA and crime reads," she adds. Susan says she was first approached by international publishers to recommend books on her page. "I think my first collaboration of a giveaway with an Indian publisher was after six months."

In Susan's line of work, the monetary compensation comes from 'ad' or 'sponsored posts', and some of these are not necessarily for books. "I have worked with brands across sponsored posts and been fairly transparent about it. I have also worked with some publishers in sponsored posts as part of their book marketing plans," she says. But the compensation, she admits, has never been for a positive review of a book. It's only for content, like a hardback now being available as a paperback, or news of a new release. "The thing to take care is that you shouldn't accept every paid collaboration that comes you way. You need to think if it is something that suits you, your brand and your audience. You need to maintain your credibility because that's the most important thing for your audience."

Varanasi-based Sudipta Sinha, who runs Masala Chai, a YouTube channel with over 6,500 followers, is arguably the only popular online reviewer for Hindi books, making her the most sought after among regional publishing houses. Sinha, who previously worked with All India Radio (Aakashvani) decided to launch Masala Chai in 2018, because radio never promised space for conversations around books, which she devoured by the dozen. Within a year, she was able to monetise the channel. What started as a hobby, became a full-time job. Sinha now has price points for every review—her charges begin from R300 onwards. "There is a huge production cost. I handle everything from shooting and editing the video, and if it's helping the book get traction, I think it's only fair we get paid for it," she says. Not every book review comes at price. "If there's a book that I like, and I feel deserves to be read, I won't think twice before reviewing it for free." A publicist, on anonymity, explained why she wouldn't mind paying for Sinha's reviews. "We have noticed a sales and popularity surge, when Sudipta has promoted our book, when compared with a Hindi national daily."

For many, however, bookstagramming is simply a passion enterprise. A case in point being author and book blogger Vivek Tejuja, who has been in the blogging space since 2009, making him, a credible influencer. Tejuja hasn't charged for his work till date; he earns his bread and butter as culture editor of Verve magazine.

Despite being an avid bookstagrammer, Tejuja, who has 7,650-plus followers and prefers to call himself a "reader who likes talking about books," is also one of its harshest critic. He feels that there is a lot of noise in the space today, with everyone calling themselves an expert on books. "When my book [So Now You Know: A Memoir of Growing Up Gay in India with HarperCollins] came out in September, a lot of bookstagrammers got in touch with me, either asking for free books or collaborations. And what I told my publishers is, do not send my books to them, or send it to very few if you must. Let the book grow organically," he says.

He finds Instagram to be a "tricky" space to promote books. "It's done a service as well as disservice. Disservice, because I don't know whether bookstagrammers are actual readers or photographers, posing to be readers. When I read their reviews, I don't get a sense of the book in question at all. There are great plus points, of course. Space for a discussion around books in traditional media is shrinking. Thanks to social media, there is some discussion possible."

Mumbai-based Vidhya Thakkar, who is another favourite among publishers, and has managed to get over 9,000 followers since she started reader_viddh, says the problem is of plenty. "There are too many of us in. Everyone is scrambling for free books. That's also made this fraternity of bookstagrammers critical of each other. Though I don't charge for reviews, I am often criticised by fellow Instagrammers for collaborating with publishers for giveaways of books. What people don't see is that we are working for the greater good, which is to encourage reading," she says. In January 2018, Thakkar also co-founded @mumbaibookstagram, which serves as a platform to repost work by other bookstagrammers from the city. "We also conduct book meet-ups, author interviews and swap book events, to help spread the word," says Thakkar, a professional digital marketer.

Anish Chandy, literary agent and founder of Delhi-based Labyrinth Literary Agency, says his experience with influencers has been mixed. "I don't think the current practice of sending books to bloggers who put up free reviews has any effect on sales because it has been commodified; everyone's doing it. So, you'll find a lot of obscure books that have tons of 4 or 5 star reviews, but no real sales. When someone with a track record in the subject for non-fiction says something nice about it on social media, it leads to immediate sales. Similarly, for fiction, if someone who has built a reputation of being an unbiased book expert on social media recommends a title, it leads to sales. The tone and text that they use also does matter."

He recalls working with an author, who knew an A-list Bollywood star personally. "At the author's request, the star tweeted a 'buy the book' link to over 10 million followers. The next day, the category manager of the e-commerce site got in touch saying that 15,000 people clicked on the book link. I asked him how many copies were sold since the link was tweeted. His response: 34."

Next Story : Believing in the gospel according to U2