As a true Indian entrepreneur, he digitized his entire collection within 16 hours and business had recovered to almost 80 of pre-COVID times. The name of the app is DUKAAN. 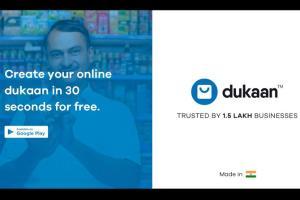 
Ram Alok runs an apparel store in Amroha district of Uttar Pradesh. Since the lockdown of March 2020, his business was under severe stress since there were no customers who would come to shop. Adding to his woes, the interest on the money he took on credit to buy inventory for his store was increasing everyday. His business could have gone bankrupt.

Luckily for him, his son saw the link for an app that could digitize his store and enable him to take orders online from his customers. As a true Indian entrepreneur, he digitized his entire collection within 16 hours and business had recovered to almost 80% of pre-COVID times. The name of the app is DUKAAN.

The story of Dukaan app and its founder starts in Satara, Maharashtra where Suumit Shah, the founder of Dukaan, worked as a shop boy running errands for a small shop owned by his uncle. He would later finish engineering from college in Sangli and start a journey of a lifetime.

As a quick learner he learnt web design and development from his room-mate in college, digital marketing from online courses and started his own business by the name of Risemetric along with his existing CTO Subhash Choudhary - a college dropout turned into hardcore techie in 2014. They have become one of the most successful digital entrepreneurs in the country helping brands like Sony, McDonalds, Oyo, Cred etc. Their modest mannerism doesn't truly reflect his quick ascent into business and digital fame.

One day, during a lockdown, Suumit got a text from a Jockey (the international brand) outlet in Bangalore who forwarded a pdf which had the list of items they sell and their msg highlighted: "We now start accepting orders on WhatsApp".

At first he was appalled to see that Jockey expected this way of selling to work. But then he quickly realised the opportunity to build an easy to use platform for small and medium businesses to help them go online.

Within the next 48 hours, Suumit, along with his team built Dukaan —u00e2u0080u008aan android app which lets anyone create their online store within 30 seconds literally!

The most important thing everyone loved about Dukaan is it's simplicity! We literally talked to a 16 years old kid who helped his Dad setup online Rakhi store in Gorakhpur to a 59 years old wholesaler from Surat who sells beauty products to barbers.

"There is no platform which is as easy as using GPay for creating online storesu00e2u0080u008a—u00e2u0080u008athat's exactly what Dukaan wants to do. Desi Bharosa + World Class tech = True Digital India, is what we believe in", says Suumit with a spark in his eyes.

Along with Suumit and Subhash, the Dukaan team has over 8 CXOs like Kaustub Pandey - an IITB dropout, who previously ran Shipler, BC Jukebox and had a successful exit and Anuraag Meena who is a hardcore techie who built bunch of tech products which operates at a scale.

India is going digital, our friendly neighbourhood Dukaandar's aren't! Probably because there is no one (or a very few) trying to understand/solve their problems.

Currently, everyone is trying to solve payments/lending or credit issues for small merchants but no platform has truly unlocked social and hyper-local commerce for the majority of India that lives outside metropolitan cities.

With falling smartphone prices, a significant decrease in data tariffs and increased availability of mobile-first content, Digital is the new reality of India.

On top of that, the on-going pandemic has instantly morphed offline consumers into fast digital customers who quickly learned how to buy products and services online.

For millions of neighbourhood dukaans, the key to meeting these consumer demands and solving the problems of survivability, come down to technology, and how they leverage it.

Shopify and GoDaddy are too alien for these businesses. What they needed was a technology even a 16-year-old boy can use with just a smartphone.

With Dukaan's super easy, affordable end to end managed digital platform, we are changing the landscape in which local stores operate and getting them closer to the future they deserve but couldn't get.

Maybe a small-town boy who has roots in Satara but built the most high-tech products would help them through this transition. Maybe technology with a twist of bharosa was always the answer Indian businesses were looking for.

Here's to builders like Suumit and his team who could make India first products and herald a new age of digital revolution across the country.