Thank you emerges as the most used Emoji on Twitter

Many people have also used Twitter in recent months to express their gratitude - to medical workers, grocery store workers, sanitation workers, their families, and friends 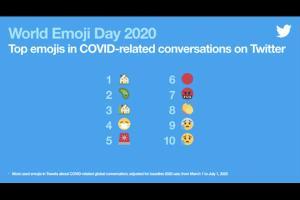 
When something happens in the world, it happens on Twitter, and emojis have inspired some of the most creative means of expression on the service over the past few years. To this end, Twitter unveiled the top emojis that dominated conversations on the service starting from January 01, 2020, to July 10, 2020. 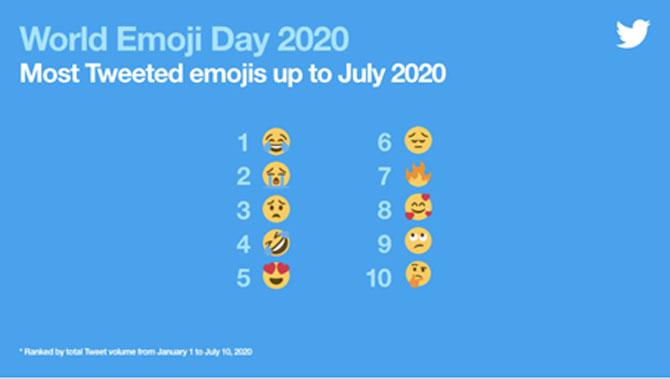 So glad I reached home in time before it started pouring again.. dyu see the wind carrying the rain bounch off that building wall?!u00f0u009fu0098u0082 Crazy! #BangaloreRains pic.twitter.com/NMRe7cmFX0

Face with tears of joy was the top most used emoji on Twitter.  The emoji is a yellow face with a big grin, uplifted eyebrows, and eyes shedding tears of laughter. It is widely used to show delight in something funny or pleasant. This emoji continued to reign on Twitter as the most used one, as recorded in 2019 too, thus revealing laughter or humor as the most expressed sentiments on Twitter.

Loudly crying face was the second-most used emoji on Twitter. This crying out loud face usually conveys inconsolable grief or a feeling of dejection, but may also express other intense feelings, such as overwhelming joy. This too, maintained its rank #2 on the service, signifying people’s comfort in taking to Twitter to share their absolute emotions.

Why there is no app for pet sitting? I would open that app, see who needs a pet sitter for this weekend, goto their place and take care of their dogs. That would be the best weekend I could ever have.

With a 415 percent spike in growth, pleading face secured the position for the third-most used emoji on Twitter. It is a yellow face with furrowed eyebrows, and large, moist eyes, which appears to be appealing or pleading for something. It may also signify the feeling of being touched by a gesture.

As people took to Twitter to share their hysterical laughter on various topics, the Rolling on the Floor Laughing or ROFL emoji ranked #4 in terms of most used emojis on Twitter. The Smiling Face with Heart Eyes followed closely after as people enthusiastically expressed their feelings of love, infatuation, and adoration on the service.

The sixth position was occupied by the Pensive Face emoji that is used to convey a range of emotions, such as disappointment, guilt, or loneliness. The Fire emoji, which is a commonly used symbol to convey the new age slang lit (can be interpreted as “excellent” or “awesome”), recorded a growth of 290% over the same period last year, thus ranking #7. This was followed by the Smiling Face with Hearts. Used for expressing happy and affectionate feelings, this emoji recorded a growth of 119 percent in usage on Twitter.

As the world changed fundamentally in the year 2020 due to the outbreak of the COVID-19, people used unique emojis to convey their feelings about dealing with the new normal and express their feelings and thoughts on Twitter. The most used emojis on Twitter representing COVID-19 / Stay at Home conversations featured the ‘Stay Home’ emoji, the Microbe, another version of ‘Stay Home’, followed by the Face with Medical Mask respectively. These signified conversations around the themes of staying indoors and practicing social distancing, sharing updates around the COVID-19/ coronavirus itself, as well as encouraging the adoption of safety measures such as keeping one’s face covered.

The impact of COVID-19 on our conversations and behaviour is evident in emoji usage trends compared to last year: there have been spikes in usage for the shopping cart, face mask, and toilet paper emojis, alongside drops in usage for emojis related to travel, attending events and haircuts. 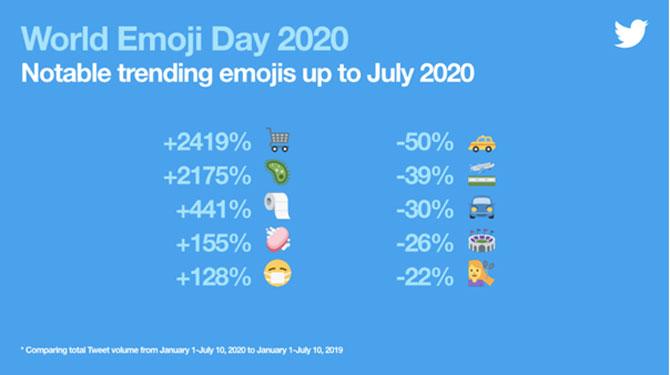 Many people have also used Twitter in recent months to express their gratitude - to medical workers, grocery store workers, sanitation workers, their families, and friends. This is reflected in emoji usage too: the use of the 'thank you' emoji increased by 89 percent compared to the same period last year.

How to insert emojis in Tweets

Next Story : Is home automation the newest lifestyle trend?