Ajay Devgn and Sonakshi Sinha's prayer before the battle 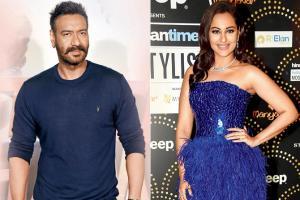 
After wrapping up the first schedule in Hyderabad, Ajay Devgn has taken his ambitious offering, Bhuj: The Pride Of India, to Gujarat. mid-day has learnt that over the past few days, Devgn and co-star Sonakshi Sinha shot for a song in Kutch, complete with a majestic set and over 300 background dancers.

Apparently, the song comes at a crucial juncture in the narrative where Devgn's character — Squadron Leader Vijay Kumar Karnik — is heading out for his mission. A retelling of an important chapter of the 1971 Indo-Pakistan war, the Abhishek Dudhaiya-directed project focuses on how Karnik and social worker Sunderben Jetha Madharparya had convinced the local women to rebuild the only runway in Bhuj after it was bombed by the Pakistani army.

Says a member from the creative team, "The unit arrived in Mandvi last week. A huge set was erected at the venue for the song. Composed by Amar Mohile and choreographed by Ganesh Acharya, the number was shot as a maha aarti where the villagers and jawans of the Indian Air Force and Border Security Forces are praying for the success of Ajay's mission. The song opens with Ajay and Sonakshi offering their prayers to Lord Ganesha."

Confirming the news, producer Bhushan Kumar says, "It's the climax song and has been choreographed in a grand manner by Ganesh Acharya. He brought 300-odd dancers that made the song majestic and visually beautiful." The climax of the war drama — also featuring Sanjay Dutt and Parineeti Chopra, and produced by Kumar, Ginny Khanuja, Vajir Singh and Kumar Mangat Pathak — will be shot at Kathda village in Mandvi over the next fortnight.

Also Read: Anees Bazmee shares a picture with Ajay Devgn; says 'he puts a smile on my face'

Next Story : Judgementall Hai Kya on making 19.2 Cr: No publicity is bad publicity