Veteran actor Kader Khan's last rites were performed in the presence of a large number of people, including his three sons, in a mosque. 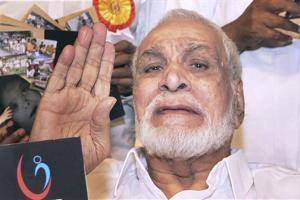 
The funeral of veteran actor Kader Khan, who passed away at the age of 81 on January 1, was held in Canada on Wednesday. The last rites were performed in the presence of a large number of people, including his three sons Sarfaraz Khan, Shahnawaz Khan and Quddus, in a mosque.

Kader Khan, who was admitted to a Canadian hospital, suffered from progressive supranuclear palsy (PSP), a degenerative disease that causes loss of balance, difficulty in walking and dementia. Born in Kabul, Afghanistan to Abdul Rahman from Kandahar and Iqbal Begum from Pishin (British India - now known as Balochistan, Pakistan), Kader Khan on October 22. The actor was known for his impeccable comic timing, and his nonpareil work as an actor and a writer in several films.

As an actor, Kader Khan appeared in over 300 films and more, post his debut film in the 1973 film Daag. Starring Rajesh Khanna, Kader Khan played the role of a prosecuting attorney. Acting was not the only forte which he excelled in, the comedian was also a prolific screenwriter for Bollywood films (1970s to 1999) where he wrote dialogues for over 200 films. But did you know acting was not the first choice as a career option for Kader Khan? He started earning as a teacher; before entering the film industry in the early 1970s. Kader Khan taught at M. H. Saboo Siddik College of Engineering, Mumbai as a professor of Civil Engineering.

Kader Khan has three sons - Sarfaraz Khan, Shahnawaz Khan, and Quddus, who live in Canada. His eldest son Sarfaraz Khan has also acted in several films. The actor is also related to the family of Zareen Khan, who also works in films like Hate Story 3, Veer among others.