Rakul Preet Singh: Don't have a godfather offering me work 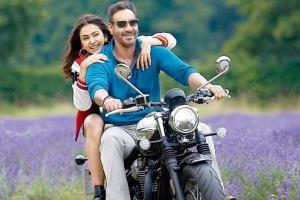 
A prominent face in the South, Rakul Preet Singh is Bollywood-bound once again with De De Pyaar De. Quiz her on her infrequent appearances in Hindi films, and she attributes it to destiny rather than design. "I had signed my first Telugu film before Yaariyan [2014] happened.

When that turned out to be a hit, I got many big projects down South. I thought I will do Hindi films whenever something good comes my way. I don't have a godfather offering work to me, so there has always been a struggle [to get projects]. But the fact that you do not get it easy makes you respect your work more. I want to have great films to my credit, irrespective of which language they are in."

Singh says she was intrigued by the latest comedy's concept — that of Ajay Devgn's 50-year-old character falling in love with a woman half his age. "It's a progressive film that reflects what is happening in the world today.

Relationships are not defined by age. They are all about finding the right companion," she says, adding that it was a privilege to share screen space with Devgn and Tabu. "I've always wanted to work with such fine actors. Their presence made me put my best foot forward."

Also Read: Rakul Preet Singh: Want to be part of great films irrespective of the language

Next Story : Shilpa Shetty Kundra reveals how she looks like a million bucks at 43